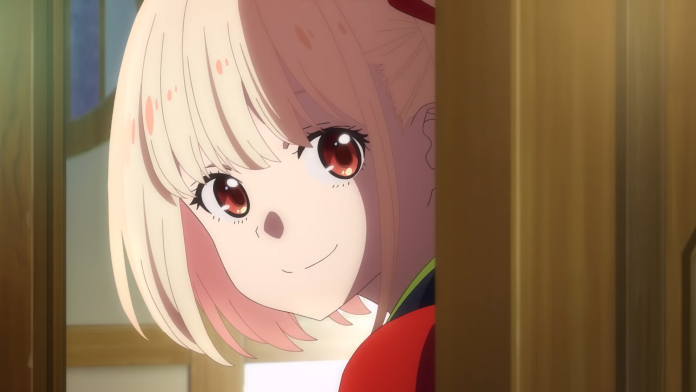 The upcoming anime series Lycoris Recoil has just revealed a new promotional video for fans. Unlike last month's teaser promotional video, this new video shows fans actual footage from the series. The series is not based on a novel or manga and is an original anime adaptation by Shingo Adachi.

The story of the series is set in "Lyco-Reco" (Riko-Riko), a Japanese-style cafe in the old downtown area of Tokyo. It follows energetic signboard girl Chisato Nishikigi and coolheaded newcomer Takina Inoue who accept requests for things like coffee, sweets, and more. Customers can come for advice and guidance on everything from romance to fighting monsters.

The official website for director Shingo Adachi's original television anime Lycoris Recoil, slated to premiere in July, posted the anime's first full promotional video on Friday. The video also shows off the cafe that is the anime's central setting and teases some of the cast’s non-cafe activities, including romance consultations and acting as a sales broker.

Lycoris Recoil's main staff sees Shingo Adachi in the director's chair. The anime will be Adachi's directorial debut. Before picking up the reins for this anime, Adachi was the character designer and chief animation director for "Wagnaria!!" and "Sword Art Online." The series' staff also includes Asaura as the story draft writer.

Imigimuru is the character designer for Lycoris Recoil, while Spider Lily is the creator. A-1 Pictures is the animation production company for the series. It was also announced that the first three episodes would be screened in advance at TOHO Cinemas Kinshichou Rakutenchi on June 12. Check out the cast for the series and the new character designs:

Shion Wakayama as the more reserved and serious Takina Inoue

Ami Koshimizu as Mizuki Nakahara, who is around 30 and desperately seeking marriage

Misaki Kuno as Kurumi, who doesn't want to work

From deliveries, to chaperoning, to getting rid of zombies, and fighting a giant monster??

Just stop by for a consultation!

No matter the order, leave it to us!"