Is Paramount Plus a Completely Different Service to CBS All Access? 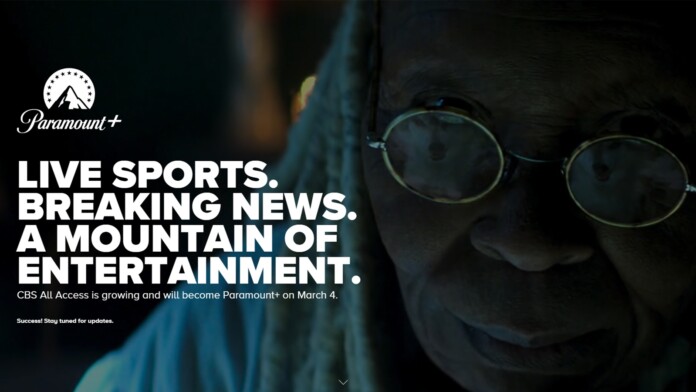 The answer to this question is Yes and No. We know it sounds confusing, but it’s the truth.

Not only will they have CBS shows and CBS All Access Originals, but they’ll also add some 30,000 episodes and movies from BET, Comedy Central, MTV, Nickelodeon, and Smithsonian Channel. Plus, we’ll also get hundreds of movies from Paramount Pictures. In some way, you can say that Paramount+ will incorporate all the CBS All Access content.

For its part, Paramount Pictures has a ton of movies. In 2020 alone – the abysmal year for movie production – they released 11 movies, including Sonic the Hedgehog. Some of the titles they’ve released over the years include multiple franchises, including Transformers, Mission: Impossible, Star Trek, Paranormal Activity, and other movies like Interstellar, and so on. Even some Marvel films were made by Paramount Pictures, like The Avengers or Iron Man 3.

Furthermore, you’ll get live streams for most networks included with the service. So far, it’s unclear if we’re getting live streams for MTV, for instance, but they did mention that we will get CBS, CBSN, CBS Sports HQ, and ETLive.

So far, CBS All Access costs $5.99/month and $59.99 per year for the ad-supported version and $9.99/month and $99.99 per year for the ad-free version. Paramount Plus will maintain the prices for a while, at least. In fact, if you want to get a good deal, then you may want to subscribe to CBS All Access before March 3rd and go for the yearly plan. Input PARAMOUNTPLUS coupon code in the voucher area, you’ll get half the price off on the yearly plan. Such a discount is good in our eyes, no matter what we’re talking about.

It’s going to be an interesting service, and we’re sure more content will be added as time goes on, both originals and from the covered networks.