How to Watch They/Them Online From Anywhere: Stream the Kevin Bacon Slasher Movie 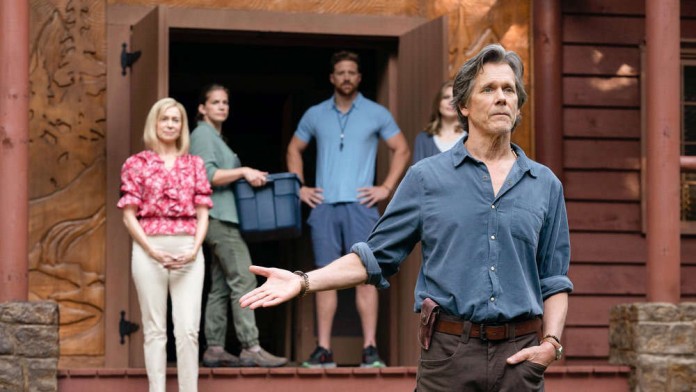 Peacock is here with a camp slasher film, so get ready to watch a queer psychological thriller where a group of teens are sent to a program that is intended to "help them find a new sense of freedom." We have everything you need to know, including the plot, release date, and a stellar cast, so keep reading to find out where, when, and how to watch They/Them online from anywhere.

They/Them follows a group of LGBTQIA+ teenagers who are sent for gay conversion therapy at Whistler Camp for a week. It quickly becomes apparent that the they are in for something far worse than they expected when they become subject to unsettling psychological manipulation by a mysterious masked killer. The cast of the horror movie includes Kevin Bacon as Owen Whistler, the camp director, Carrie Preston as Cora Whistler, a licensed therapist and Owen's wife, Anna Chlumsky as Molly, the camp’s medic, Theo Germaine as Jordan, a transgender and non-binary camper from a religious background, Quei Tann as Alexandra, a trans woman whose parents have threatened to evict her if she doesn't go to the camp, Anna Lore as Kim, a closeted lesbian camper, Monique Kim as Veronica, a bisexual camper, Darwin del Fabro as Gabriel, a sensitive gay camper, Cooper Koch as Stu, a jock who thinks he can't achieve his dreams if he comes out as gay, and Austin Crute as Toby, a gay camper who bartered a vacation to New York with his parents for a week at Whistler Camp.

The movie is written/directed by John Logan, who is openly gay, has 2 Tony nominations, and previously worked on Gladiator, Hugo, and Skyfall. This is how he described the film: "They/Them” has been germinating within me my whole life. I’ve loved horror movies for as long as I can remember, I think because monsters represent ‘the other’ and as a gay kid, I felt a powerful sense of kinship with those characters who were different, outlawed, or forbidden. I wanted to make a movie that celebrates queerness, with characters that I never saw when I was growing up. When people walk away from the movie, I hope they’re going to remember the incredible love that these kids have for each other and how that love needs to be protected and celebrated."

They/Them premiered at the Outfest film festival on July 24, and now it will land exclusively on Peacock on August 5, 2022.

How to Watch They/Them Online From Anywhere

Nowadays, if you're in your home country and have a membership to a streaming service that carries your favorite shows and movies, it's fairly simple to watch them online. However, you'll discover that the majority of these services are geo-restricted, so if you travel abroad or even to another state, you won't be able to access them. However, there is a solution to this issue; we suggest you use a VPN to watch They/Them online, as it lets you switch your virtual location and gives the impression that you are back home.

ExpressVPN is one of the most trusted VPNs on the market, and it offers a 30-day money-back guarantee for subscribers. We suggest you try ExpressVPN for 30 days RISK-FREE to unblock almost any streaming platform, such as Peacock, Netflix, Hulu, and more. Through the use of top-notch encryption algorithms, it also defends you from security lapses and safeguards your online privacy.

You can easily subscribe to ExpressVPN (49% Discount + 3 Months FREE) on its website. After downloading the native app for your device or system, you can log in through a sign-in link sent to your email address or an activation code. Proceed to pick a server from your home country when you turn on the VPN, and then access a streamer to watch They/Them online from anywhere.

How to Watch They/Them in the US Without Cable

Since They/Them is a Peacock original series, you can watch it exclusively on the NBCU-owned Peacock streaming platform. It offers a free ad-supported plan, but you need to subscribe to its Premium tier to watch the originals. This will cost you a monthly fee of $4.99 and comes with limited ads. If you want to remove ads, upgrade to the Premium Plus plan, which costs $9.99 per month.

We must also mention that you can get the Peacock Premium tier for free if you're an Xfinity, Spectrum, or Cox customer. Peacock is compatible with a wide range of devices, including Smart TVs, video streaming devices, iOS and Android smartphones and tablets, and even gaming consoles, and you can check the full list of compatible devices here.

Traveling outside the US? You can use a capable VPN to watch the film while abroad, as this tool will remove all geo-restrictions you may face. All you need to do is pick a US server when you turn on the VPN and then access the streamer to watch They/Them online from anywhere.

How to Watch They/Them in the UK

In the UK, Peacock is available as part of the Sky TV and NOW streaming platforms. Peacock is included in NOW's Entertainment Pass package, which has a monthly starting price of £9.99 and offers a 7-day free trial to new customers. There is currently no official release date for the movie here, but we can hope it will land on this service soon.

With the help of a trustworthy VPN, you can easily watch They/Them while traveling internationally. When you activate the VPN, just choose a UK server, and you're ready to go.

Can I Watch They/Them in Canada and Australia?

Although certain services in Canada and Australia typically offer Peacock content, we were unable to locate a streaming service for you to view They/Them there as of yet.