How to Watch The Undeclared War Online From Anywhere 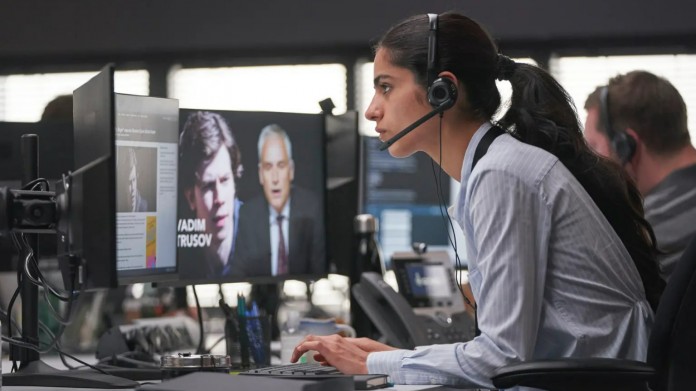 We're going to dive into a new world full of secrets in The Undeclared War. Mystery, action, thriller, drama, everything you can want in a series. So let's check out where, when, and how to watch The Undeclared War online from anywhere.

This British TV series takes place in a post-pandemic world at the GCHQ, the Government Communications Headquarters, the UK version of the NSA. The intelligence agency discovers a triple-tier threat that takes us into a complicated world. Deep-fake media and CCTV hacking will go on top of the malware discovered within the system. The worst part is that the target of the attack is the electoral system. Of course, the fact that this hits so close to what's been happening in the past few years is no coincidence. Russia is the culprit here too, and any wrong step can take the world into a downward spiral.

The security breach causes a high-stakes first day at work for Saara Parvan, a young student gaining experience in the malware division, and she is soon placed in the midst of a dangerous data war with Russia that goes much beyond the boundaries of the internet.

The Undeclared War premieres on Peacock on August 18, 2022. There are 6 episodes included in the show.

How to Watch The Undeclared War Online From Anywhere

Watching The Undeclared War online should be easy as long as you’re in your home country. However, when you travel abroad, streaming services are all geo-blocked, and you won't be able to access your favorite content. However, you can watch The Undeclared War with a VPN subscription as it will bypass the blockades and make it seem like you’re at home.

If you don't know which VPN you want to get, we recommend you choose ExpressVPN. This is one of the best tools on the market today, and we have thousands of servers across the world. It also has an intuitive interface with top-notch encryption protocols protecting your data and more. It also works to lift the blockade for most streaming services like Peacock, Netflix, or Disney+. You can try ExpressVPN for 30 days RISK-FREE as the company has a no-questions-asked money-back policy.

You can subscribe to ExpressVPN (49% discount and 3 Months FREE) on its website and pick the annual plan. You may create an account, pay for the service, and then download the apps for your devices. Next, you must launch the VPN once and set it to a server from your home country when you want to watch The Undeclared War online from anywhere.

How to Watch The Undeclared War in the US Without Cable

Watching this enticing show in the United States is pretty simple, as you'll need a subscription to Peacock.

Creating an account is super easy; you'll only have to fill in the details and pick your desired plan, and once you pay for it, you can watch the show. There's also the Free tier available, but The Undeclared War won't be available without a paid subscription.

Peacock is available on a ton of devices, including iOS and Android smartphones and tablets, Smart TVs, media streaming devices, and even gaming consoles. Check the full list of compatible devices here. The premium plans give you access to over 60,000 hours of movies and shows, so there's a lot of media to consume. Peacock features content from NBC but also lots of original content and blockbusters from Illumination, DreamWorks, or Universal Pictures, to name a few.

Peacock is geo-restricted, so if you're traveling outside the US, you'll notice access to your favorite shows is restricted, including The Undeclared War. A reliable VPN will easily bypass any geo-blocks, so you can watch the show wherever you are.

How to Watch The Undeclared War in the UK for FREE

The Undeclared War premiered in the United Kingdom on Channel 4 back in June 2022. You can stream the show on the Channel 4 website without any subscription requirements. You won't even need to log in or create an account, so go ahead and stream the show right now!

Please keep in mind that Channel 4's stream is not available outside of the United Kingdom due to licensing limitations. Therefore, you will need to use a capable VPN in order to stream The Undeclared War whenever you travel outside of the country, whether for vacation or business.

How to Watch The Undeclared War in Australia

Australian fans of Simon Pegg can watch The Undeclared War on Stan. The show is already available to stream on the platform as it premiered in the country on July 1. The plans are priced at $10, $14, and $19 per month, so you can choose whichever one you like best.

Stan is geo-blocked, so you won't be able to access the service while traveling outside the country unless you have a strong VPN. Just ensure you choose a server back home to make it seem like you're still there.

How to Watch The Undeclared War in Canada

If want to watch The Undeclared War in Canada, you will be able to do this on Showcase. Unfortunately, no release date has been announced so far.