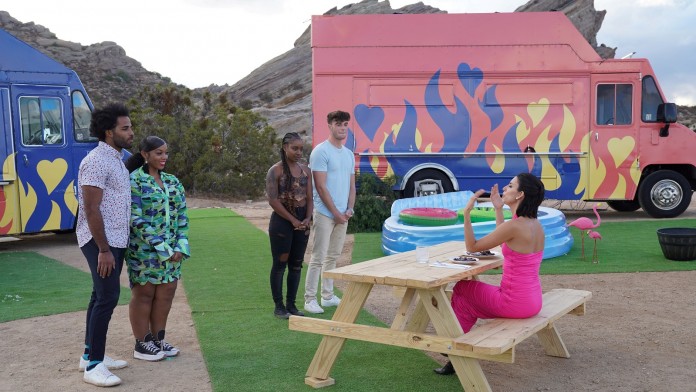 If you like blind date reality shows as much as cooking competitions and extremely spicy food, you'll most probably love this new title that is about to premiere, and the best part is that you'll be able to stream all the episodes online quite easily, just like you do with all your favorite content nowadays. We have all the details you may need, including the premiere date, plot, and the name of the streaming service that hosts it, so let's see when, where, and how to watch Hotties online from anywhere in the world.

In this wild dating competition, four hot singles go on blind dates and battle to cook up dishes worthy of a date night. However, in order to keep cooking, they’ll have to choke down extreme spicy food challenges that go high up on the Scoville scale. And like that wasn't enough, the action is happening in food trucks parked in the desert heat.

Each episode presents two pairs of sexy singles who make a meal and take on extreme spicy food challenges to fast forward the dating process - and also win a cash prize. Will beating the heat help them burn through first date facades to form a more authentic connection, or will it all just be a hilarious hot mess?

The show is hosted by comic and actress Jade Catta-Preta, who hosted several other shows, such as The Soup on E! or others productions on VH1. You may also know her from her recurring roles on American Housewife, Californication, and MTV's Punk'd. She will also judge both what’s on the plate and each of the dates, and decide who wins the prize.

The new Hotties show will premiere on Tuesday, August 16, 2022, and you will be able to see the episodes over on the Hulu streaming platform. The season is set to have 10 episodes, each 30 minutes long, and all of them will launch simultaneously on the series premiere day. New titles usually become available to watch on streaming services right after midnight PT (3:01 am ET).

How to Watch Hotties Online From Anywhere

We admit we watch all our favorite shows and movies online thanks to the many live TV and streaming services available nowadays in our home country. However, things change when you travel abroad or even in some territories within borders because these platforms have geo-restrictions in place due to licensing deals. To unblock your library when you travel, you will need to use a VPN subscription to watch Hotties online since a VPN changes your IP address to one in your country where the geo-restrictions are off, tricking the service into seeing you as being back home.

If you don't know what VPN to choose, we recommend you take advantage of this company's very generous no-questions-asked 30-day money-back guarantee to try ExpressVPN for 30 days RISK-FREE. This is one of the best tools on the market right now, and it's extremely easy to use, even for beginners. The most important thing is that it can unblock almost all the popular streaming services in an instant, including Hulu, Disney Plus, Netflix, Amazon Prime Video, and several more. ExpressVPN has thousands of servers worldwide, fast and stable connections, no bandwidth caps, and strong encryption protocols to protect your data online.

Another great thing is that you can also get a substantial discount right now if you select the annual plan, so go to their website and subscribe to ExpressVPN (49% Discount + 3 Months FREE). It only takes a couple of minutes to create an account, so fill in the required details, see the payment through, then download the native app for your device or system. After the installation is done, open the VPN app and switch it on after you select a server from a territory back home. The final step is to open the streaming service to watch Hotties online from anywhere after the title premieres.

How to Watch Hotties Online in the US

If you live in the United States, you will be able to watch Hulu's original show quite easily since all you need to do is subscribe to the Hulu On-Demand service to watch Hotties online. To get started, you just need to create an account on the platform, so fill in your details and select one of the two base plans available.

Usually, both of these options come with a very generous 30-day free trial on Hulu. The platform sports some affordable subscription prices - the ad-supported Hulu plan is $6.99 per month or $69.99 per year, and the commercial-free Hulu plan costs $12.99 per month.

Hulu includes thousands of hit shows, movies, and more, and you can also customize by selecting Premium or Partner Add-ons for an additional monthly fee, such as HBO Max, Showtime, STARZ, and others.

Besides the standalone service, there's another option to watch Hotties online for United States customers, in the form of a pretty nice bundle deal that comes with a discounted price. The Disney Bundle offers three services, and you get Disney Plus, ESPN Plus, and Hulu with or without ads, and you save 25% if you subscribe to this bundle compared to the monthly cost of subscribing to these three services separately. The Disney Bundle has two subscription options when you sign up for it - if you select the ad-supported Hulu plan, it costs $13.99 per month, and if you go for the No Ads Hulu plan, it costs $19.99 per month.

All streaming services are geo-restricted, and since Hulu is only available in the US, you will lose your access while traveling. To solve this problem, you can run a trustworthy VPN in the background before accessing the streaming platform. More details in the previous segment.

How to Watch Hotties Online in the UK, Canada, and Australia

Traveling abroad when the episodes premiere? You will need to use a capable VPN if you cannot access Hotties while traveling due to the geo-restrictions all streaming services have in place. Just select a server from back home and turn on the VPN before loading the streaming platform.