How to Watch Heartland Season 16 Online Free from Anywhere 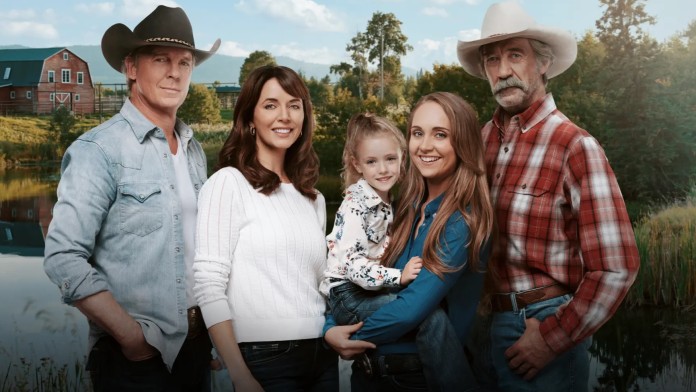 One of the most popular drama series among horse lovers is here with a new season, and we can't wait to watch it online from the comfort of our homes.  We have everything you need to know, including the release date, cast, plot, and other details about the show, so keep reading to learn where, when, and how to watch Heartland Season 16 online from anywhere.

Heartland is the story of the Fleming-Bartlett family, particularly Amy Fleming, who is an exceptional horse trainer. In Season 16, we'll see Amy and the rest of the family look forward to the future and band together to aid one another, becoming stronger than ever. Viewers can watch Amy being tested by the horses that require her assistance, but she'll also open herself up to the potential of new friendships and maybe even love! Her daughter Lyndy will follow in her mother's footsteps as her horsemanship skills develop over the course of the season. Jack and Lisa will find themselves living the dreams they've each worked so hard to earn; Katie will struggle to find her place in the world and within her family; Lou and Peter have recommitted as a couple, and Tim's marriage to Jessica has never been happier.

Where To Watch Heartland Season 16

How to Watch Heartland Season 16 Online from Anywhere

It's quite simple to watch shows and movies online these days if you're in your native country and have a subscription to a streaming platform that offers it. However, due to geo-restrictions, you may find it difficult to access your streaming library while traveling abroad. To avoid this issue, use a VPN to watch Heartland Season 16 online because it will eliminate geo-blocks and make it appear as though you are back home.

Do you want to learn more about VPN services? We recommend ExpressVPN. With thousands of servers throughout the world, the tool unblocks most streaming services like Netflix, Hulu, etc., protects you from security breaches, and ensures your online privacy with best-in-class encryption measures. Make the most of its no-questions-asked money-back guarantee and try ExpressVPN for 30 days RISK-FREE.

If you go to its website and subscribe to ExpressVPN (49% Discount + 3 Months FREE), you may save a lot of money. When you download the native app for your device or system, you will receive an email with a sign-in link or activation code. When you activate the VPN, select a server in your own country and then connect to a streaming provider to watch Heartland Season 16.

How to Watch Heartland Season 16 in Canada

You can watch Season 16 of Heartland on CBC and CBC Gem if you live in Canada. Although this streaming service has a free tier, you can also choose a premium membership for $4.99 a month to receive access to the CBC News Network live stream and ad-free on-demand episodes.

We should also mention that some seasons are available on Amazon Prime Video via Super Channel, which costs $9.99 monthly, on top of the Prime membership fees, which are also $9.99 per month. You'll be happy to know that both services come with a generous 30-day free trial. Additionally, 15 seasons of Heartland are available on Netflix, which costs $9.99 to $19.99 per month in the US.

Traveling outside Canada? Then you use a trustworthy VPN to access CBC Gem. Simply connect to a Canadian server before accessing a platform to watch Heartland Season 16 episodes on the go, and the tool will remove any geo-restrictions you may face.

Can I Watch Heartland Season 16 in the US

A release date for the US hasn't been announced yet, but we should let you know that 13 seasons are available on Hulu, 14 seasons included with Freevee on Amazon Prime Video, 14 seasons on Peacock, 14 seasons on Netflix, and 14 seasons on Hallmark Movies Now.

A reliable VPN will remove geo-restrictions, making it easy for you to watch the show while traveling abroad. Just select a US server when you turn on the VPN, and you're all set.

Can I Watch Heartland Season 16 in the UK and Australia

In the UK, only a couple of the early seasons of the show are available via the UP Faith and Family channel on Amazon Prime Video for £3.49 monthly on top of the £8.99 per month Prime subscription fee. Netflix UK offers seasons 7 to 15 for £5.99 to £13.99 per month, but we're not sure when the latest season will land in the UK, so keep an eye out!

And if you're in Australia, you should know that all 15 seasons of Heartland are available on Amazon Prime Video via UP Faith and Family channel for $4.99 per month after a week-long free trial. On the other hand, the Prime membership costs $14.99 monthly after a generous 30-day trial period. Heartland seasons 7 to 15 are available on Netflix, and a subscription costs AU $10.99 to $22.99 per month.

Since most streaming services are geo-restricted due to licensing agreements, you may use a strong VPN to watch Heartland Season 16 when you're traveling abroad. Select a server from your home country, turn on the VPN, and you may access the platform for easy streaming.

How Many Episodes Does Season 16 of Heartland Have?

Heartland Season 16 has 15 episodes, each episode is 60 minutes long. The previous 3 seasons only had 10 episodes each.

Where is Heartland Season 16 filmed?

The Heartland Season 16 Filming Locations are as follows Calgary, Kananaskis, High River, Longview, Millerville, and Kew in Alberta. Various other locations were also filmed based on the scenario during the 15 seasons of the series.

Heartland S16 E1 "Something’s Got to Give" - October 2, 2022 (7 PM ET): After another Miracle Girl moment, Amy reconsiders her role at the Youth Centre. Jack misses Lisa, especially after Tim and Jessica are forced to move into the house.

Heartland S16 E3 "On the Ropes" - October 16, 2022 (7 PM ET): Amy and Caleb train one of Sam's rescue horses to be a roping horse; Jack and Tim disagree about Blue's future; Katie and Logan go river rafting and end up on a bigger adventure than they expected.

Heartland S16 E4 "Spark to Flame" - October 23, 2022 (7 PM ET): Amy's surprised to learn Finn has returned to town; Jack and Tim win Hudson's Entrepreneur of the Year Award, which leads to unexpected problems for Lou and the arrival of someone from Tim's past.

Heartland S16 E6 "Into the Wild" - November 06, 2022 (7 PM ET): Amy helps a unique animal from an abandoned zoo. Tim joins Jessica in New York for her art show, while trying to fix a past mistake. Jack and Lisa work through difficulties in their relationship.

Heartland S16 E10 "Lurking in the Shadows" - December 4, 2022 (7 PM ET): Amy and Lou go on a road trip to stop a Miracle Girl imposter. Tim puts on a rodeo school showcase, but a series of mysterious events threaten the show. Amy questions if she should visit Finn.

Heartland S16 E12 "Memory" - January 15, 2023 (7 PM ET): A surprise visitor causes Amy to see Finn differently. A weekend trip to the cabin has Jack struggling with his past while Katie finally opens up. Lou and Peter's dinner party doesn't go as planned.

Heartland S16 E14 "After the Ever After" - January 29, 2023 (7 PM ET): Amy helps Georgie rediscover her passion for showjumping; Lou's surprised when Peter announces he's moving to Heartland; a Winter Fair allows Tim to help Jessica and his rodeo school.

Heartland S16 E15 "A Light in the Dark" - February 5, 2023 (7 PM ET): Jack faces the truth about his rift with Al Cotter. Lou and Peter take the next step in their relationship. Georgie makes a decision about her future. Amy sees her own future in a new light.

When Will Heartland Season 16 Be On Netflix?

Heartland Season 16 might arrive on Netflix in Spring 2023, but there is no official announcement yet. Since Season 15 arrived on Netflix 4 months after the finale aired, we could expect the same for Season 16.

When is Heartland Season 16 Finale?

Keeping in mind that Heartland Season 16 has 15 episodes, and we are getting one episode weekly on Sundays, the final episode should be on January 8, 2023.