As revealed by the US Patent and Trademark Office, Facebook has filed several patent applications of technologies that are aimed at predicting the future location of its users. The company shows a keen interest in tracking the whereabouts of its users because this allows them to serve much better-targeted ads, learn more about their habits and interests, and build a more active engagement to their social platform that will increase ad revenues and information sharing.

Starting with the “Location Prediction Using Wireless Signals on Online Social Networks”, Facebook presents a method of tracking the user’s location by monitoring and analyzing the strength of NFC, Wi-Fi, Bluetooth, and cellular signals. This helps triangulate the device’s position with much higher accuracy than its user would anticipate right now. All this takes place without activating the GPS at all, showcasing that the determination of the device location can be done through other sensors and their corresponding data collection.

Next, Facebook has applied for a patent titled “Offline Trajectories”, referring to an advanced step by step methodology of how to calculate the user’s probability to move elsewhere, as well as how to predict where this next location would be. The method involves a series of metadata analysis and calculation of transition chance based on the calculation of the user connectivity odds. If a user is deemed to get to an offline location, Facebook will try to feed the data to the device beforehand, so the ad targeting will continue even when the device is not connected to the internet. 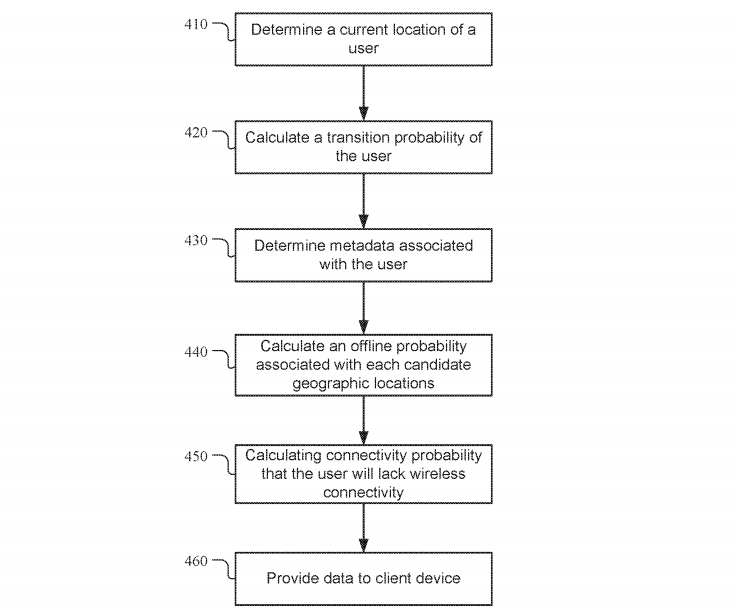 Finally, Facebook filed a patent application entitled “Predicting Locations and Movements of Users Based on Historical Locations for Users of an Online System”. This system analyzes the location data of multiple groups of people and generates trend models and location chains that help predict the next transition point of users that fall in a particular category or group. With this methodology, Facebook will also be able to distinguish between people who just visit a city and people who live there permanently.

As always, a spokesperson of the company tried to play down the negative publicity by stating that patent applications are not indicative of future plans, but more like an exploration of what’s technically possible. However, the goal of Facebook to predict user movements is evident from the above, and Facebook is not the only one who is after user location data. Google, Grindr, weather apps, beauty apps, streaming apps, and possibly a whole host of more are all monitoring, storing, analyzing, and even sharing data about your location.

Are you comfortable with Facebook being able to predict where you’ll go next? Let us know in the comments below and don’t forget to also join Facebook and Twitter discussions on this or other news from TechNadu.