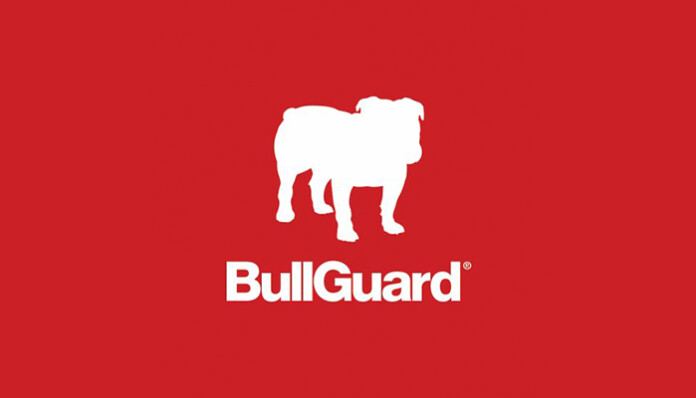 As you probably know, malware nowadays is more complicated and a lot more advanced than it was years ago. Malware perpetrators are now primarily driven by profit, unlike in times past when hobbyists dominated hacker groups. This means they have the means and skills to build ever more complex threats. It also means that malware creators have the resources to release new attacks more incessantly. This is why we've decided to bring you our BullGuard Antivirus review.

Before we dive deep into this software's capabilities, we'd like to share helpful information. You can look at these are overviews of the most important functions.

And finally, here's our verdict based on our extensive testing. We will provide bits of important information, so you get to know the most important pros and cons.

After giving you a glimpse of what to expect, it's time to deal with the BullGuard Antivirus review in a more in-depth way. Continue reading the article to learn all you need to know about this useful application.

What needs to be said is that the BullGuard Antivirus doesn't come with a completely free version but you get to test drive it for 15 days at no cost. While this is a short period to get an exhaustive feel of the software, it is sufficient for gauging the type of protection to expect from the antivirus software. 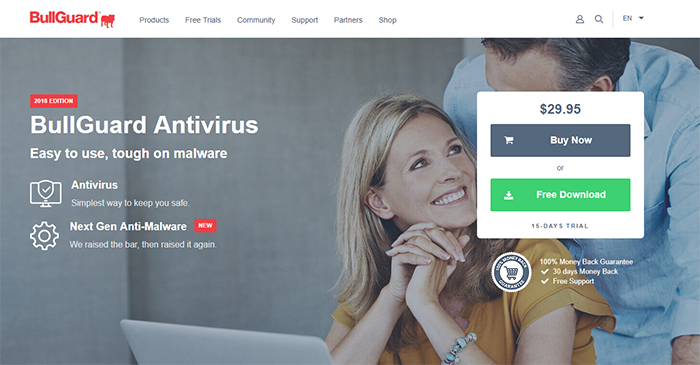 You can install BullGuard antivirus in a matter of minutes. The software does everything on its own but you'll be required to sign-up for an account. Our Score: 9/10.

Installing BullGuard antivirus is a breeze. Head over to the official product page and click on the ‘Free Download’ button. This is ideally the option you should take as you’d want to get a feel of the software before committing to a cash payment.

Alternatively, you can purchase the software right away by clicking on the ‘Buy Now’ button as shown in the screenshot. Clicking either button downloads a small installer file (BullGuardDownloader.exe) that’s a mere 326 KB on disk. Running the installer downloads and installs the actual antivirus app, which is just under 59 MB in size.

The installer takes care of the entire setup process so you barely need to do anything. However, as soon as the installation is done, you'll be asked to create a new account. There's no way go around this - so it's a good thing that you have to fill out only three fields. Once you register, you'll get to access the dashboard. 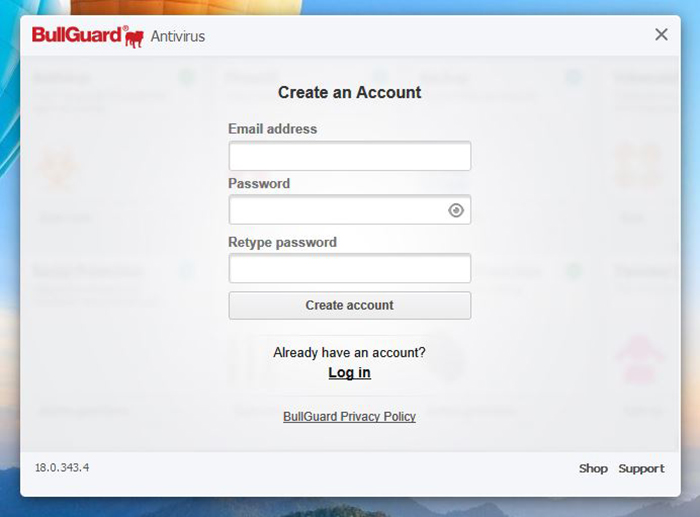 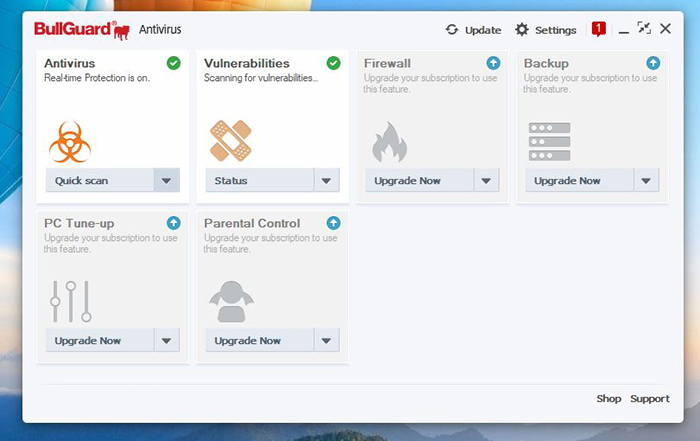 Even though the BullGuard Antivirus is easy for use, it comes with somewhat outdated UI. Our Score: 8/10.

The app’s home interface displays buttons for all security features but those that are not available in the free trial version are grayed out. For instance, only the ‘Antivirus’ and ‘Vulnerabilities’ detection features are active in the trial version. The other features are grayed out and only become active on upgrade, including ‘Firewall’, ‘Backup’, ‘PC-Tune up’, and ‘Parental Control’.

Besides the somewhat confusing muted buttons, everything else works smoothly. From the ‘Antivirus’ feature button you can launch functions such as Quick Scan, Full Scan, or Custom Scan with just a click. 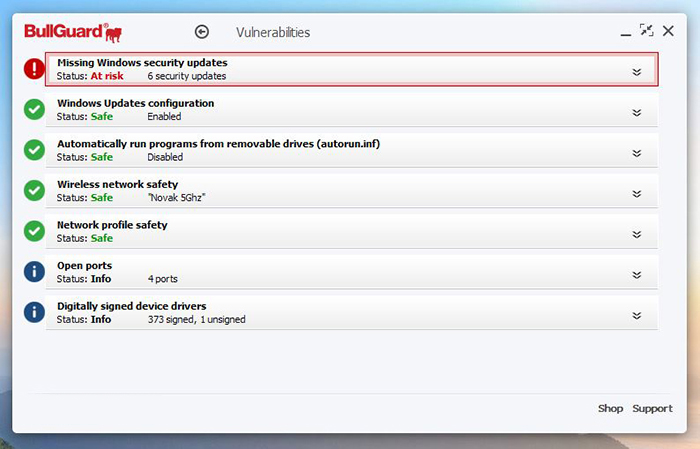 The app interface is pretty straightforward and you can quickly get the function you want without a lot of guessing. Clicking on ‘Status’ in the ‘Vulnerabilities’ button displays a report of the last scan with any detected threats. It will also show the current status of your system – whether protected or at risk. In addition to displaying a summary of detected threats, the report feature allows you to scroll through previous scans in detail, along with displaying basic system settings and app settings as they were at the time of scanning. 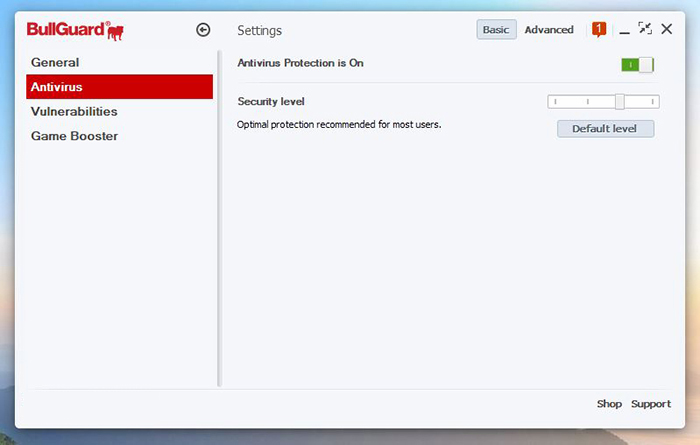 This antivirus provides a basic set of options. It scans for threats in the background, but also allows for three types of manual scanning. Our Score: 9/10.

Under ‘Antivirus’ settings you can set the default security level of the real-time protection feature to minimal, optimal, or maximum. You can also set a custom level. This option can be found in the top-right corner, by clicking on 'Settings'. If you then click on 'Advanced', you'll see additional features: 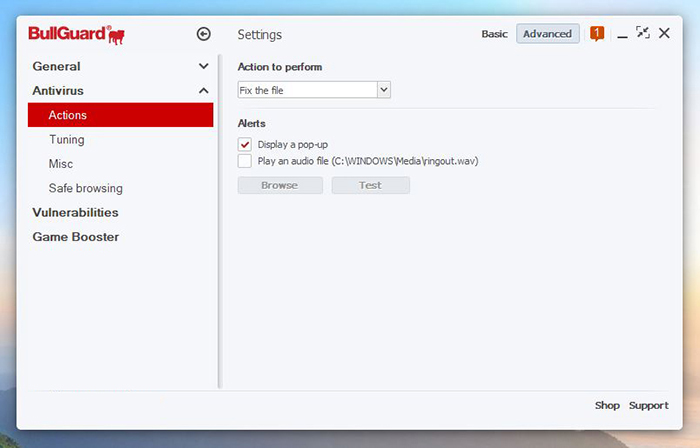 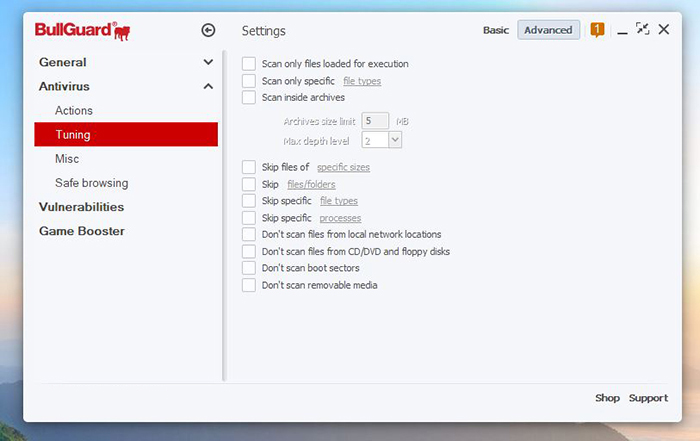 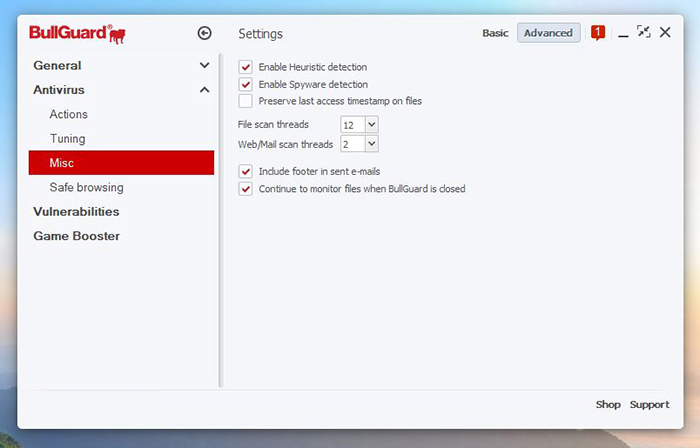 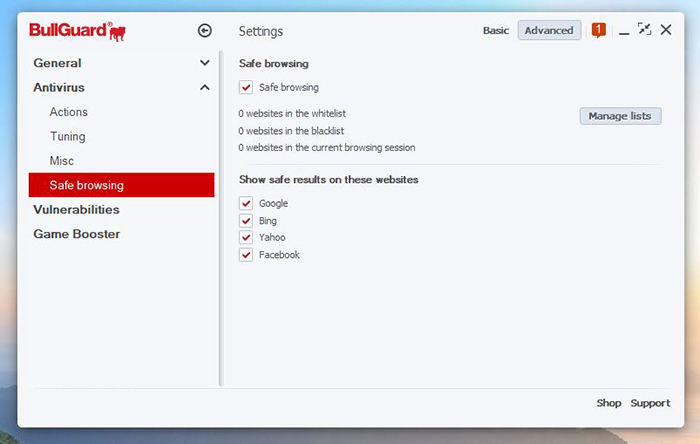 It's also important to mention the Vulnerabilities scanning. Found on the Home Screen, it gives you a glimpse into problematic areas of your PC. For example, if you need to update your OS, connect to a protected Wi-Fi, and similar. 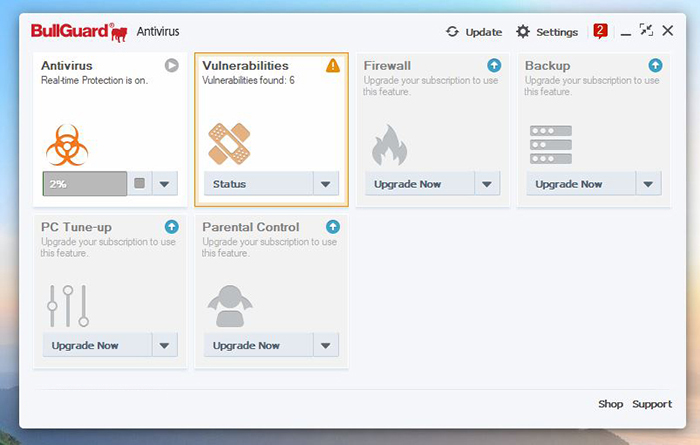 You can fine-tune this option by going to Settings > Vulnerabilities. This is where you can disable scanning on certain features of your Windows PC.

On the home screen of this application, you will see a section named 'Antivirus'. This is where you can perform manual scans. There are three types of scans: 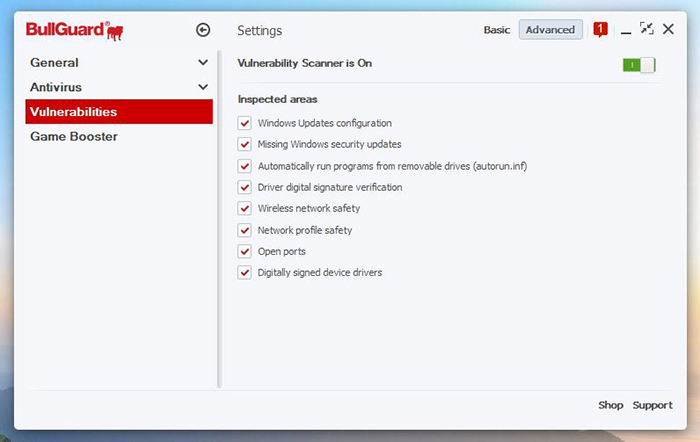 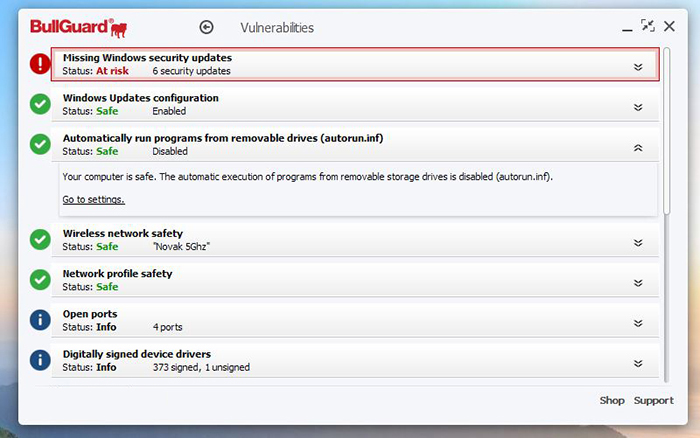 BullGuard Antivirus does more than offer traditional malware protection. It offers advanced spam protection and URL filtering thereby helping to identify and eliminate malicious phishing attacks before they take hold. What’s more, this function works at the network level so it will detect any creepy browser extension and block it.

When BullGuard detects a potential phishing threat, it redirects you to a safe URL temporarily and gives you the option to return to safety. However, it also gives you an option to bypass the page and access the intended site if you think the alert is a false alarm. 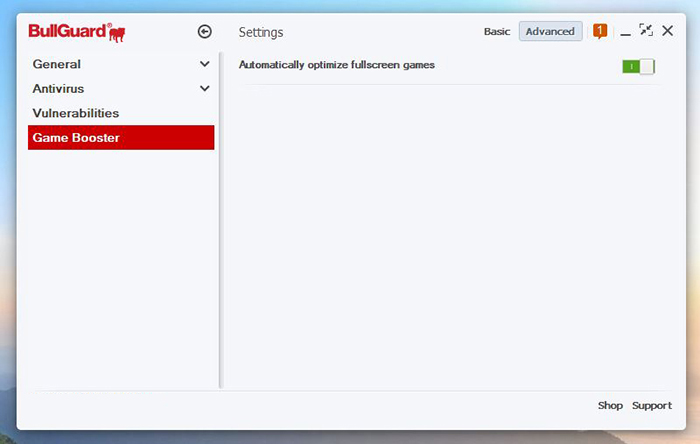 There’s another pleasant extra that comes with the latest BullGuard version: the Game Booster feature. The official claim is that it allows you to play online games without disabling the app. It doesn't affect gaming speed either, according to the official claim from BullGuard. Regardless of the Game Booster’s actual effect, we thought that it’s a pleasant little extra that most gamers will love. To use this feature, go to Settings > Game Booster and make sure this tool is enabled.

According to independent tests, this antivirus performs admirably. Our Score: 9/10.

BullGuard performed incredibly well in our test run for this review but we are fully aware that this was a very limited test. To properly gauge the app’s abilities, we compared test results from two reputed independent antivirus testing labs.

Overall, BullGuard antivirus seems to perform extremely well in Windows Home User environments. It is particularly excellent in offering real-world protection against a range of malware, whether known or emerging.

BullGuard is a pretty lightweight antivirus. However, it can drastically slow down installations of software. Our Score: 7/10.

BullGuard is not so hard on computer resources. As previously mentioned, the setup files use up less than 400MB of disk space and once the whole app is extracted and installed, you’ll lose about 850MB of disk space.

In terms of its effect on system performance, BullGuard generally performs above the industry averages. In a performance test done by AV-test between September and October 2017, BullGuard scored an aggregate of 5.5 out of a total of 6.

BullGuard’s most impactful effect on system resources is during installation of frequently used apps. The tests revealed that BullGuard slows down the installation of such apps by a big percentage in both standard and high-performance PCs, as shown in the image above.

The BullGuard Antivirus is only available for Windows users. Mac and Linux users are forced to buy a more expensive solution. Our Score: 5/10.

BullGuard antivirus is primarily built for Windows machines, specifically Windows 7, 8, 8.1, and 10, both on 32 and 64 bit systems. While there’s a version for Mac computers, it is very limited in features and doesn't offer a free trial. Moreover, this version is only accessible through the product guide page, which clearly demonstrates that the app is primarily designed for Windows users.

Other technical requirements include the following:

With various discounts available, you can get a pretty good deal. Our Score: 9/10.

As already mentioned, BullGuard antivirus software is not available freely. You have to make a one-off purchase of $29.95 (various discounts are offered throughout the year).

However, you can take advantage of the 15-day free trial to test how well the software works. You don't need to provide your billing details when installing the trial version but as soon as the trial period is done you will have to enter billing information to affect the payment. 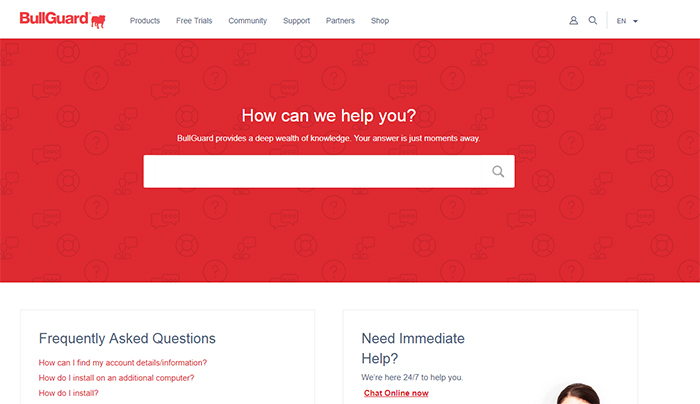 BullGuard is doing a great job when it comes to customer support. You can count on live chatting or email. Our Score: 9/10.

BullGuard offers multiple support channels for addressing customer queries. Most prominent is their elaborate help center page which has a Frequently Asked Questions area for the most common user questions as well as direct links to the email support and live chat options.

Email support is available in nine languages including German, Dutch, French, Danish, and Chinese, among others.

Users also have access to multiple product guides which offer step-by-step instructions on how to install and run specific BullGuard products.

BullGuard is certainly worth serious consideration for anyone looking for proven protection for their PC. The app is specially built for Windows machines and does an excellent job of keeping away the most common PC threats. Its static virus engine is constantly updated and regularly passes stringent tests by leading independent antivirus testing labs.

Despite the fact that it’s not free, there’s no doubt that you get absolute quality for your money. It’s also one of the most affordable antivirus apps on the market currently.

Cons: No free version and the trial period is somewhat short; Limited support for other platforms other than Windows.

If you’re a Windows user and want a trusted antivirus app that protects your computer proactively, then BullGuard is up there with the best. BullGuard’s superior real-time protection keeps out 100% of known and most emerging threats. It also filters plenty of spammy URLs and malicious links that would otherwise infect your computer.

For business users, however, you might want to try another app designed to protect your computer from threats that specifically target business users. Therefore, we'd like to recommend reading our reviews of AVG Free Antivirus and Panda Global Protection.

Have you tried BullGuard? Please feel free to share your experience with us.