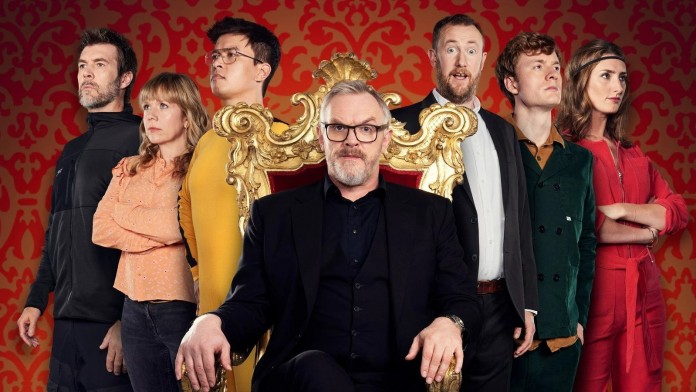 After multiple attempts to mark its presence on American television, British game show Taskmaster has just launched its global streaming service. Its production company Avalon said that Taskmaster SuperMax+ is a subscription-based platform that will allow users to enjoy content on demand.

Fans of the game show will now be able to watch all seasons of Taskmaster, including all international versions and unseen specials, ad-free. It is available for a monthly fee of £5.99 or an annual fee of $49.99. It supports Apple TV, FireTV, Roku, Chromecast, and Samsung Smart TV. They are also offering a 30-day free trial. The first three seasons are currently available to watch, with more content coming in every week.

Created by Alex Horne, the show is hosted by The Inbetweeners star Greg Davies. Davies is the Taskmaster in the show, while Horne acts as his assistant. Participants, usually comedians, compete by performing tasks that challenge their creativity. Comedians who appeared across seasons include Russell Howard, Katherine Ryan, Al Murray, Romesh Ranganathan, Lolly Adefope, Noel Fielding, Aisling Bea, and Rose Matafeo.

Taskmaster enjoyed success in the UK, with the show going into season 13 this spring. Executive producer Jon Thoday said that they have tried to launch the show a few times in the US over the years. They even tried doing a US version of the game show on Comedy Central, but it fell through.

I just noticed by looking at our YouTube numbers that more and more Americans were watching the actual classic UK show online. We should just try and build the British version up in the US… So we decided to have a go, launch our own SVOD [subscription video on demand], largely to make it available to places in the world where anybody can get it if they want it.

While the British version of Taskmaster has been broadcast in 94 countries, local versions have also aired in Sweden, Finland, Norway, Belgium, Spain, and New Zealand.

“I’ve been told quite a few times that not everyone everywhere can watch Taskmaster. This is far from ideal and I’m sorry. However, there’s now something called Taskmaster SuperMax+, which is a worldwide streaming service with a great name where you’ll soon be able to watch all episodes ad-free; the complete global home for all things Taskmaster. Season 9 will premier here, for instance, so people in North America can finally see me dressed up as a mermaid,” said Horne.

Latest
Streaming
How to Watch Murdoch Mysteries Season 16 Online From Anywhere
The hit drama from CBC is returning for its 16th season, and we're looking forward to streaming the show online. We have...
Read more
Sports
How to Watch World Cup 2022 Online: Live Stream Soccer Matches for Free from Anywhere
Germany’s hopes of making it to the round of 16 are back in their own hands after they came from behind to...
Read more
Sports
Brazil vs. Switzerland Live Stream: How to Watch World Cup 2022 Group G Match Online
The 2022 FIFA World Cup has been full of twists and exciting matches so far. Another incredible match-up appears to be on...
Read more
TechNews