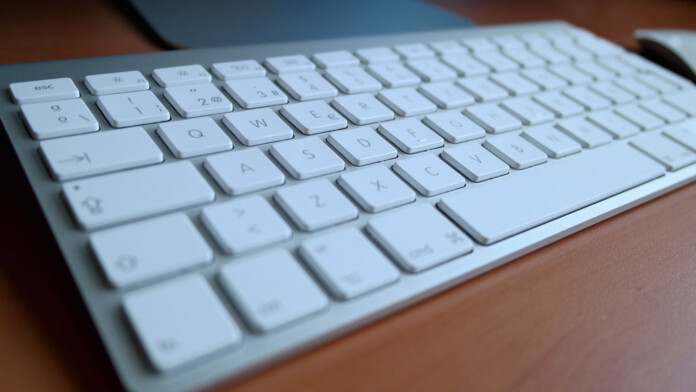 According to a recently published patent that was submitted by Apple Inc. to the US Patent & Trademark Office, the tech company is exploring transparent keycaps for future keyboards. The patent mentions angle filters and partially reflective materials to be implemented on the keycaps, fulfilling the role of a contrast and visibility booster – as well as an aesthetically pleasing element. The patent holds the number 20200211795, and it was filed on May 9, 2019. So, why exactly is Apple going for a mix of glass and colored back-lighting?

The answer is multi-dimensional, as there are several things that one would achieve through the use of glass keycaps combined with mini LED displays. First, they can be used and changed as needed – for example, shifting from English to Indian characters when the user changes the keyboard layout. Another example would be to display app-specific functional keys when the user launches an app, like turning keys into “bucket fill,” “color picker,” and “select tool” when launching an image editor. This is very similar to what Apple has already done with the “Touch Bar,” so people already have an idea of how this would work.

Then there’s the glass as a material, and the attributes that come with it. Glass feels nice and also premium to the touch, and is exceptional when it comes to protection from wear and tear. Any letters that would otherwise be printed on the plastic keycaps will now be displayed under a glass layer, so it would be impossible to rub them off even after many years of hard use. Glass doesn’t wear out, so glass keycaps would last for a lifetime if the rest of the keyboard’s components would last that long anyway. Of course, there are ways to tackle this issue like using double-shot keycaps, but Apple may just want to go for a more “classy” solution.

All that said, this is just a patent application that got approved, so nothing is certain, announced, or planned yet. It is important to underline that Apple secures a large number of patents every month, and only a tiny percentage of them get to ever materialize in actual products launched in the market.