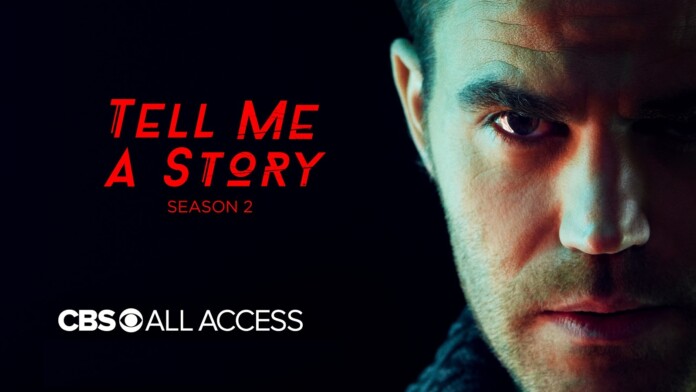 We all love stories and fairy tales, and stepping into that wonderful world of magic, but Tell Me a Story is a completely different thing, and you’re going to want to hang on for the ride. We are planning to watch Tell Me a Story online and we invite you to find out how you can do this too.

Tell Me a Story is of psychological thriller that was first aired back in October 2018. Finally returning for a second season, we will see the series take on even more stories.

The show is actually set in modern-day New York City and we see the first series taking on The Three Little Pigs, Little Red Riding Hood, and Hansel and Gretel, and turning them into a tale of love, and revenge, and murder, and definitely something that kids shouldn’t be watching. The second season’s setting is in Nashville, Tennessee, and takes on another set of themes, namely Beauty and the Beast, Sleeping Beauty, and Cinderella.

In the first series, we saw Kim Cattrall, Danielle Campbell, Billy Magnussen, and Paul Wesley among the crew, while the second season will see a different set of actors. Paul Wesley is actually returning as an aspiring writer who struggles to keep his dark secret hidden, but we will also get to watch Danielle Campbell return for another role. Carrie-Anne Moss and Eka Darville, a pair you may have come to love from Netflix’s Jessica Jones, are taking on roles in this season as well, alongside Matt Lauria, and Natalie Alyn Lind.

When and Where to Watch Tell Me a Story?

The second season of Tell Me a Story is scheduled to premiere on December 5th, 2019, on CBS All Access. The season will also feature 10 episodes as the first one did, and we’ll get to watch a new episode every week.

When and Where to Watch Tell Me a Story?

Tell Me a Story is a show that was created specifically for CBS All Access, which means that it’s the only way for you to enjoy it. Subscribing to CBS All Access is a pretty easy job and you should also know that you can enjoy a 7-day free trial on the platform. There are two subscription options for people here, namely Limited Commercials, and Commercial Free. The Limited Commercials subscription will cost you $5.99 per month or $59.99 per year, while the Commercial Free option costs $9.99 per month or $99.99 per year. The subscriptions will get you access to a live stream from CBS, as well as a ton of CBS content, including exclusive content, such as Tell Me a Story.

You can enjoy CBS All Access on pretty much any device you have at home, including Apple TV, Android TV, Amazon Fire TV, Chromecast, Samsung Smart TVs, Roku, PlayStation 4, Xbox One, as well as iOS and Android phones and tablets. (Note: CBS All Access is a platform that only works in the United States so if you’re going to watch the show when traveling outside of the country you’re going to need to use a VPN to change your IP address so that you appear to be in the United States. Click here to learn how you can use the VPN.)

Here’s how you can set up CBS All Access so you can start your 7-day free trial:

Other Ways to Watch Tell Me a Story

How Can I Watch Tell Me a Story Outside of the United States?

One thing that people need to be aware of when traveling outside of the United States is that the live TV platforms and streaming services they pay for are geo-blocked. Basically, this means that when you travel outside of the country you can no longer access the websites of these services, or, even if you access the website, you can’t properly log into the account as they will detect your actual location. This is quite annoying, but it’s all tied to the licensing deals they have in place. The issue can be overcome by using a VPN to change your IP address so that you appear to be in the United States instead of whatever location of the world you are in. We can recommend you use ExpressVPN, which is one of the best on the market, with thousands of servers across the world, including dozens of them in the United States.

Here’s how you can use ExpressVPN to watch Tell Me a Story when traveling abroad:

Can I Watch Tell Me a Story on the CBS Website?

Unfortunately, that’s going to be a “no”. Even though they share a name, CBS All Access content can only be watched on CBS All Access, although regular CBS shows can also be watched through the streaming service.

Can I Binge-watch Tell Me a Story?

This is absolutely something that you can do because CBS All Access allows people to enjoy all the episodes from Tell Me a Story quite easily. There is no other way to enjoy these unless you subscribe to the platform.

Can I Purchase Tell Me a Story Episodes?

If you want to own episodes from Tell Me a Story you can buy them from platforms like Google Play, YouTube, iTunes, Microsoft Store, Amazon Prime, and Vudu. You should make sure to check all the available links, in case any of the services offer a better deal for you, so you can save some money.

What’s your favorite thing about Tell Me a Story? Drop us a note in the comment section below the article, and share it with friends and family so they can read it too. Follow TechNadu on Facebook and Twitter for more tech news, guides, reviews, and interviews.