How to Watch ‘Into the Unknown: Making Frozen 2’ Online 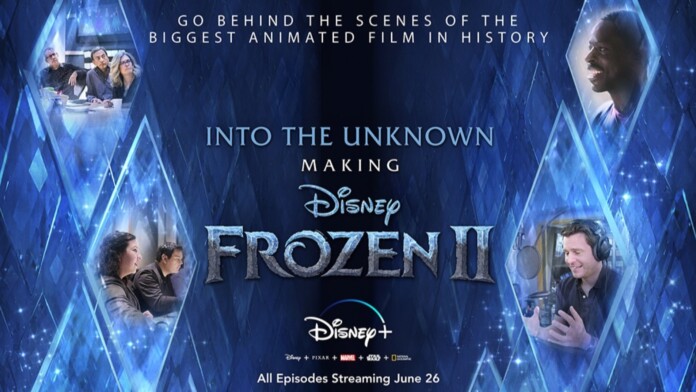 Frozen has taken the world by storm, and it's become one of those films that every kid has watched, causing extreme exasperation into parents everywhere as the children want to watch and rewatch the movies time and time again. With Disney+ soon releasing Into the Unknown: Making Frozen 2, we're expecting another spike into the film's popularity.

The film was released back in November 2019 and was just as popular as the first movie. In this journey that Disney+ is taking us on, we'll see Josh Gad, Kristen Bell, Idina Menzel, and more of the cast and crew tell their story.

Into the Unknown will follow the creative team behind the film as they struggle to make it all happen, as all details have to be smoothed out and the movie put together.

When and Where to Watch Into the Unknown: Making Frozen 2?

Into the Unknown: Making Frozen 2 will premiere on Disney+ on June 26th. Since the film is on Disney+, we can watch it whenever we want.

How to Watch Into the Unknown: Making Frozen 2

Into the Unknown: Making Frozen 2 is fairly easy to watch, especially since this is a documentary that was specifically made for Disney+. So, if you want to enjoy it, you'll have to head over to the streaming platform. The service is available in multiple countries, with more to be added soon. Disney+ costs $6.99 per month or $69.99 per year if you'd rather pay it all up-front. In other countries, the price is similar but expressed in local currencies.

American customers can also go for the bundle that includes Disney+, Hulu, and ESPN+ for $12.99 per month, which is a great deal. There are tons of dedicated apps for pretty much any device you have at home, including iOS and Android smartphones and tablets, Apple TV, Android TV, Fire TV, gaming consoles, and more.

Here's what you have to do to start your Disney+ subscription:

Is There Another Way to Watch Into the Unknown: Making Frozen 2?

Unfortunately, there is no alternative to watching this documentary because it was specifically created for Disney+. Therefore, you won't get to watch it on regular Disney channels, or on Hulu or any other service, for that matter.