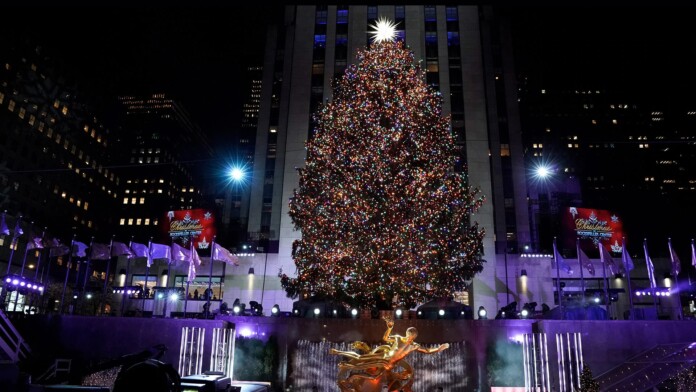 The annual lighting of the tree in New York City’s Rockefeller Center has certainly become a tradition across the United States. This year, we will watch Christmas in Rockefeller Center on NBC, and we are super-eager to watch the event, so let’s go figure out how we can do it online.

The Christmas tree in Rockefeller Center has already been installed a few weeks ago, and there has been a lot of controversy surrounding this because those branches really seemed off when they set it up. There was also an adorable story about them finding an owl in the tree that was transported over several States.

This Year we have a 75-foot, 11-ton Norway spruce that looked absolutely fabulous from where they dug it up. It remains to be seen exactly how they set up the tree and how it will all look when it’s done.

When and Where to Watch Christmas in Rockefeller Center?

Christmas in Rockefeller will stream on NBC on Wednesday, December 2nd. Starting at 8 p.m., you’ll be able to watch the event on NBC, and you get to enjoy both live concerts and the beautiful reveal of the tree.

How Can I Live Stream Christmas in Rockefeller Center?

If you want to watch Christmas in Rockefeller, then one of your best options is to go for Sling TV. Sling TV is one of the most versatile platforms we have available today, and it comes with three different bundles. NBC is part of two of them, namely Blue and Orange + Blue.

While Sling TV certainly is a really great option, there are others you could be looking into as well.

Hulu is a cool platform, and it has a single bundle of networks where you will find NBC. There are a bunch of extra channel packs and premium networks that you could be looking into, as well as add-ons to expand the cloud DVR storage space capacity or the number of simultaneous streams you are allowed to enjoy content on. A really cool thing about Hulu is that you also get access to the On-Demand library when you subscribe to the Live TV service, which means you have a lot more content to watch. Start your free trial on Hulu now!

fuboTV is another service that deserves your attention, and it features a single bundle of networks that is part of multiple plans. The plans come with extra channel packs and premium networks, as well as add-ons to expand the various features of the platform. You can also customize the subscription on your own by choosing any of your favorites. Start your free trial on fuboTV now!

NBC is a channel that broadcasts in select markets only, so depending on where you live, you’ll get access to the network or not. If you use a VPN and connect to a server from a different city, you’ll be able to easily watch any of the contents, including Christmas in Rockefeller.

How Can I Watch Christmas in Rockefeller Center From Anywhere?

Live TV platforms and streaming services from across the United States are geo-blocked, so you cannot technically enjoy them as you would from home. Our recommendation is to use ExpressVPN, which is a really great platform with thousands of servers all over the world and some great privacy features thanks to those top-notch encryption protocols they use.

You need to subscribe to ExpressVPN (49% OFF), get the apps for your device, and find a server in the United States that you can connect to. Once that connection is established, you simply have to load Sling TV and start streaming Christmas in Rockefeller on NBC.

There is a 30-day money-back guarantee avaiable with this tool, so you can take advantage of a refund if you are not happy with the product.

Can I Watch Christmas in Rockefeller Center Later On?

NBCs are really cool channels, and they usually upload any of their shows to the website and make it available to anyone to stream for free for a few days. Since NBC also owns Peacock, now you may also be able to stream the show over on the platform – likely for free.