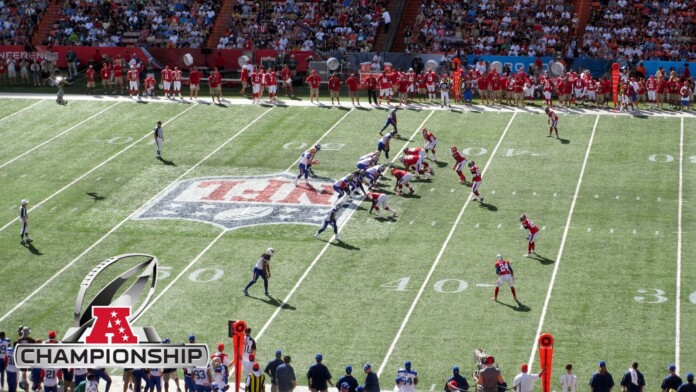 The American Football Conference Championship Game is coming up soon, and we are super curious to see who’s going to win it this time. Even better, we are watching the NFC Championship Game online, and we invite you to find out how you can do that too.

The AFC Championship Game has been played since the 1970s. It’s one of the final playoff games of the NFL, and it is scheduled to take place about two weeks before the Super Bowl. The winner of the game is taking the place in the Super Bowl LIV, so it’s going to be quite an important event.

We are still quite far from the playoff stage, so we don’t know who’s going to participate, but we will update the article when we do. Last year, the New England Patriots beat the Kansas City Chiefs in the AFC Championship Game and went on to the Super Bowl, where they actually won the game by crushing the LA Rams.

When and Where to Watch the AFC Championship Game?

The AFC Championship Game is scheduled to take place on January 19th, 2020, which is on a Sunday. The game is supposed to start at 3 PM ET on CBS.

How Can I Live Stream the AFC Championship Game?

Nowadays, we all enjoy a lot of content online, whether it is news or music, or watching movies. For quite a few years now, it has also become super easy to enjoy TV online because there are so many live TV platforms that will help you with this. Since the AFC Championship Game is set to be broadcast by CBS, we think that your best option to enjoy the game is to use CBS All Access, which is the network’s own live TV service. There are two subscription options available for you, namely Limited Commercials, and Commercial Free. Limited Commercial costs $5.99 per month or $59.99 per year, while Commercial-Free will cost you $9.99 per month or $99.99 per year. Start your CBS All Access 7-day free trial today!

Besides having access to a live stream, so you can actually watch the game, you can also enjoy a ton of on-demand content that was created by the network. There are CBS All Access apps for most of your devices, including Apple TV, Android TV, Fire TV, Chromecast, Samsung Smart TVs, PlayStation 4, Xbox One, as well as iOS and Android phones and tablets. (Note: CBS is a service that only works in the United States, so if you’re going to be traveling beyond US borders, you’re going to need a VPN to unblock the site for you. Click here to learn more about this.)

Here’s what you have to do to set up your CBS All Access account to enjoy a 7-day free trial:

Other Ways to Watch the AFC Championship Game

fuboTV – Another way that you can watch CBS is with the help of fuboTV, which is a platform that is mainly focused on sports. There is a single bundle of channels available here, which you can easily try out. Start your 7-day free trial on fuboTV today! There are other channel packs that you can add to your subscription, as well as various premium networks.

Hulu – We also have Hulu on the list, and it’s a great service that features a single bundle of channels, where you will find CBS. Besides the main bundle, you can also add a couple of channel packs to your subscription, as well as various premium networks. Start your 7-day free trial on Hulu today! The great part about subscribing to the live TV service from Hulu is that you will also have access to the video-on-demand library that the service has been building for many years.

What Can I Do to Watch the AFC Championship Game Outside of the United States?

One of the things that you should know when your travel abroad is that your live TV platforms become blocked to you, so you no longer have access to them. This can be quite annoying, especially when you are eagerly awaiting to enjoy a game or show you love, so you should know there is a workaround the problem. Basically, you need to change your IP address so that you appear to be in the United States. This can be done relatively easy with the help of a VPN that can change your IP address, so you appear to be back in the United States. We can recommend you use ExpressVPN because it’s one of the best tools on the market, and it comes with thousands of servers across the world, and some really great privacy and security features.

Here’s how you can sign up for ExpressVPN so you can enjoy the AFC Championship Game:

Can I Watch the AFC Championship Game on the CBS Website?

Unfortunately, that’s not something that you will be able to do because the CBS website no longer features a live stream for you to enjoy. In fact, the only way that you can watch a live stream of CBS is through their own CBS All Access, or with the help of a live TV platform, such as fuboTV or Hulu. (Note: CBS is a channel that is only available in select markets, so even if you use a live TV platform, you may be unable to access the content that you pay for, due to your location. If you find that you are unable to watch CBS through your live TV service, you can use a VPN to connect to a server located in a city where CBS is available. Click here to learn how you can use the VPN for the job.)

Can I Watch the AFC Championship Game With a TV Antenna?

This is something that you will be able to do because CBS is one of the last few channels that still broadcast over-the-air. TV antennas are particularly popular with cord-cutters because they enable people to watch dozens of channels for free by only paying for the antenna, which isn’t too costly.

Before you make a purchase, we do suggest you visit a site such as NoCable, which will tell you more about the channels that are available in your specific location, and how you can enjoy them. The site will also tell you how far the broadcast stations are from your location so you can figure out what range you need to get on your device in order to watch as many networks as possible. Make sure to check the devices we suggested above, in case any of them have the features you need.

How to Watch the AFC Championship Game with an NFL Game Pass?

The NFL Game Pass is a way for people from all over the world to enjoy NFL games without any type of blackout. There are three subscription plans – one of which is free, but one which does not get you much content, a second one that is called Essential and costs $23.99 for the full year, but it won’t get you access to live games. The only way that you can get access to over 250 games live, including the playoffs, and the Super Bowl, and even NFL RedZone content, is with the Pro plan. This will cost you either $2.00 per week or $99.99 for the whole year. Depending on the country that you live in, the price will change. You can check a full list of countries where the NFL Game Pass is available here.

How to Watch the AFC Championship Game In the UK, Australia, or Canada?

If you want to watch the AFC Championship Game while living in a different country, there are quite a few ways to do this, given the broadcasting deals the NFL has.

We cannot wait for the AFC Championship Game to start, so we hope you’re just as excited about it. Drop us a note in the comment section below the article and tell us which platform you chose to watch the game on. Share the article with friends and family so they can find a cool new way to enjoy the game as well, and follow TechNadu on Facebook and Twitter for more tech news, guides, reviews, and interviews.