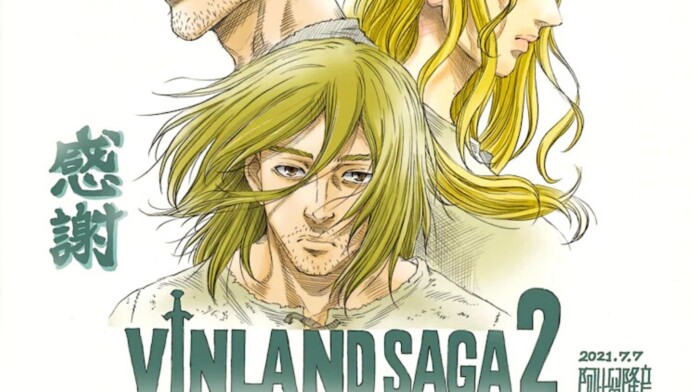 Vinland Saga Season 2 has been confirmed by its official Twitter account on Wednesday, accompanied by a new teaser trailer that you can find below.

Vinland Saga was very well received by the anime community, evident by its high ratings on MyAnimeList, so fans weren't really surprised by the recent announcement.

On 7th July 2021, the official Twitter account of "Vinland Saga" confirmed the anime's continuation during its second anniversary. Unfortunately, the official announcement was only accompanied by a teaser and a new visual and did not mention a release date. There was also no concrete information on the studio responsible for the adaptation.

However, it is predicted that Vinland Saga's season two will be released in 2022. After analyzing the production schedule for WIT Studio, the series won't be ready in time for the Fall Slate, leaving January of next year as a viable option.

The official Twitter account of Vinland Saga graced its fans with a new trailer and visual along with the announcement of season two.

While the trailer didn't give much away and acted as a flashback, it suggested that Thorfinn may be looking for something more than revenge. Furthermore, it caused ripples in the fandom, as everyone showed their excitement for the next arc called Farmland to be made.

This hype only increased with the visual of Vinland Saga that depicted Thorfinn letting go of the dagger. Now older and more rugged, it is clear that his rage has left it or developed into something else.

The adaptation of Vinland's Saga Season 1, based on Makoto Yukimura's manga of the same name, was created by Wit Studio and aired on NHK General TV in Japan in July 2019.

It was directed by Shuhei Yabuta (known for adapting "Attack on Titan"), while the composition was undertaken by Hiroshi Seko ("Mob Psycho 100"). Yutaka Yamada was the one responsible for the music, as Takahiko Abiru took care of the character designs.