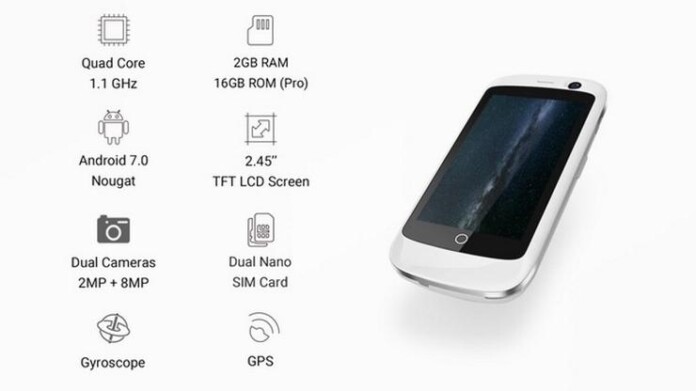 The World smallest 4G smartphone named “Jelly”  has been announced and it runs on Android 7.0 Nougat. It has a dual sim capabilities and already gained over $125000 pledged for its $30000 target over a month. The handsets are manufactured by Unihertz and the company claims that Jelly is the smallest 4G smartphone in the world.

The device is expected to come with two RAM/storage options and is available in Pearl White, Sky Blue and Space Black. It sports a 2.45-inch TFT LCD display with a resolution of 201 pixels per inch.

The handsets are powered by 1.1GHz quad-core processor, available with two configurations. The Jelly smartphone expected to come with 1GB RAM and 8GB Internal storage variant is priced at $100 (roughly Rs.3,800) whereas the 2GB/16GB model is priced at $125(roughly Rs.8,000). It will be expanded up to 32GB via microSD slot. The smartphone features an 8MP rear camera and 2MP front camera. The phone packs a 950mAh battery on 7 days on standby.

Jelly is expected to be shipped in August 2017.