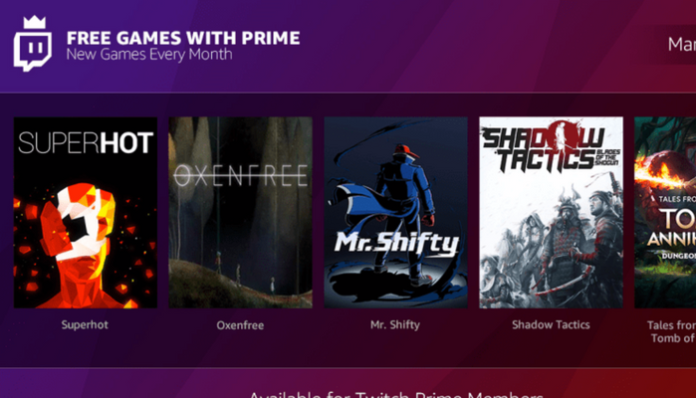 From this Thursday, March 15, Twitch Prime users will be entitled to free games from Amazon’s archives. The e-commerce giant has been trying to tap into Twitch’s customer base for years now and has made considerable effort to better the game streaming platform. Now Twitch Prime users had been given free games in the past; however, this is the first time the free game handouts are going to be on a regular basis.

Currently, Twitch Prime customers will be able to get their hands on Superhot and Oxenfree. However, from April 1st onwards, more titles will be added to their offering including games such as Tales from the Borderlands, SteamWorld Dig 2, and many more. Other companies that also had tried such free game giveaways include Microsoft games with Xbox Game Pass, as well as Sony along with PlayStation Plus.

Basically, each month there will be a selection of free PC games. The games will be available for free with a particular time frame. Users need to act within that timeframe or else the listing will get refreshed with other titles.

Amazon also exclaimed that around eight more games from the Twitch Prime Indie Amplifier would also be made free for the coming few months. Here is the full list of upcoming games that will be available in March and April.

Amazon is known for adding great value to its Prime customers, and their current free game offering gives more incentive to purchase a Prime account.

There are reports about Putin planning to propose a hackers exchange deal to Biden during their upcoming meeting.The U.S. President is under...
Read more
Streaming

How to Watch US Open Golf 2021 Online Without Cable

The eagerly awaited US Open Golf tournament makes its return this weekend, and some of the world's best golfers will be in...
Read more
TechNews