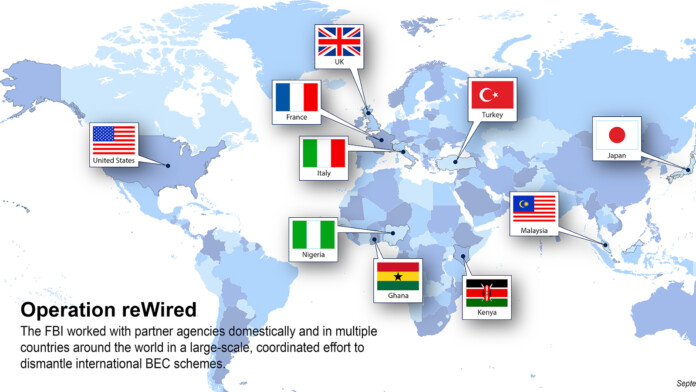 The FBI has announced that they have arrested 281 individuals whom they consider to have taken part in BEC (Business Email Compromise) operations. 167 of the suspects were located in Nigeria, 74 actors were living in the United States, while the remaining were located in various European and African countries, and some even in Japan. To conduct an effective sweep, the FBI collaborated with overseas law enforcement agencies and carrying out the network-dismantling raids. According to the FBI, they have taken down one of the most sophisticated and prolific BEC groups in the world, who managed to steal large amounts of money from hundreds of victims.

More specifically, the FBI has seized nearly $3.7 million, but the total amount of fraudulent wire transfers that the actors performed go up to $118 million. Most of this money was stolen by tricking company employees into paying the actors through social engineering tactics. Apart from this method, the actors performed numerous computer intrusions as well, so they also stole money directly in some cases.

The “Operation reWired” lasted for four months and involved a large number of FBI agents (39) who were monitoring the cybercriminals’ activities closely. This comes as the natural continuation to last year’s “Operation WireWire” that also targeted BEC scam actors. During “WireWire”, FBI made 74 arrests and seized $2.4 million from the actors. That said, this year’s operation was an improvement for the law enforcement, but it really is just a drop in the ocean of what’s going on right now.

As we discussed back in July, BEC scams have grown into a multi-billion problem, and it’s getting worse with every year that passes. In 2014, the BEC scams victim count was only 1495, and the losses amounted to $60.2 million. In 2018, there were 20373 victims, losing $1.3 billion. This makes it clear that global operations like “reWired” can do nothing other than act as a discouraging factor for the BEC actors.

To stop BEC scams and render them ineffective, companies and organizations need to take the leading role in the effort. Deploying automating alerting systems that warn of suspicious emails is one way to do this. Enabling two-factor authentication wherever this is possible is another one. Training the employees to recognize the signs of fraud is the third one. If every entity did the above and nothing else, the success rates of BEC scams would drop dramatically.