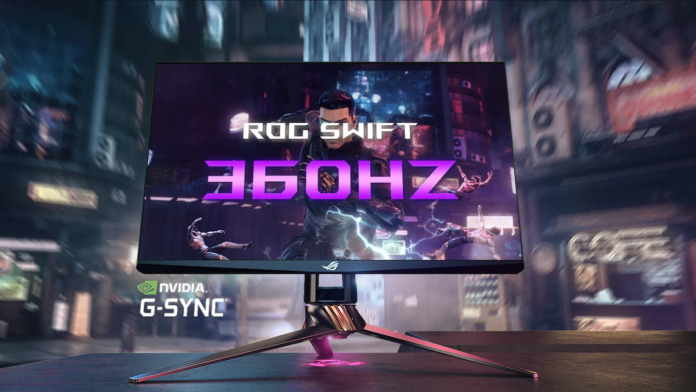 ASUS will debut its new ROG Swift 360 monitor at the CES this week, and it’s going to be the first product to support Nvidia’s new 360Hz G-Sync technology. The RTX line of GPUs made by Nvidia is capable of unprecedented refresh rates that are meant to bring a new set of benefits for professional eSports gamers. Obviously, the responsiveness that comes from having a monitor working at a maximum input latency of three milliseconds and refreshing once every 0.36 milliseconds is something that can’t be beaten by anything on the market right now.

The new monitor will be a Full-HD (1080p) 24.5-inch panel, but more formats and iterations may appear later on. For some perspective and comparison, ASUS’s flagship gaming monitor is the ROG Swift PG279Q, which offers a refresh rate of 144Hz at 1440p, and it can be overclocked to 165Hz. The highest refresh rate in the market right now is in the 25-inch ROG Swift PG258Q that delivers 240Hz. That said, the step up to 360Hz is more like a huge leap, rather than an incremental improvement. Most of the other gaming monitors in the market play around the 75-90Hz spectrum, so you get the idea.

G-Sync is Nvidia’s own proprietary adaptive syncing (variable rates) technology that is meant to help eliminate viewing problems such as screen tearing, lags, ghosting, and stutter. The graphics hardware and software expert has been developing G-Sync since 2013, so it has now reached a point of maturity where its performance is matching the limits of human cognition. The ROG Swift 360 monitor will reportedly be ready at some point in 2020, and the first field to get the first taste of it is bound to be eSports.

From there on, additional high-priced products will enter the market for the tech-enthusiasts willing to pay the cost for this unique experience. Gradually, displays of this type will become more affordable, and “mortals” will be able to join in too. Until then, if you’re a gamer who’s looking for a good monitor, check out our list of eleven hand-picked options for you to consider. Getting unstuck from the 60Hz mud will be liberating for your eyes, hands, and mind, and you’ll definitely get an advantage over your opponents.

Are you already using a high-refresh-rate monitor? Let us know what your experience is like in the comments section down below, or join the discussion on our socials, on Facebook and Twitter.