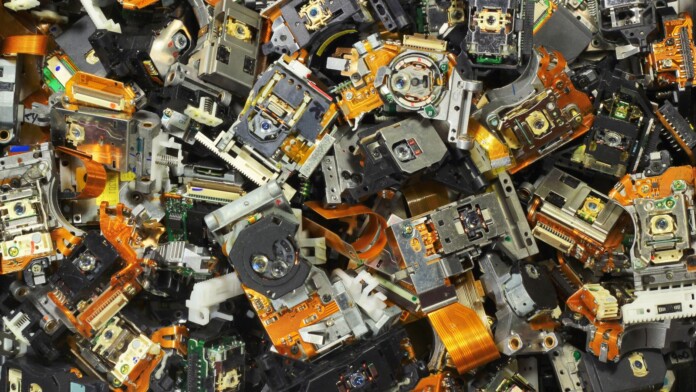 The problem of e-waste is a significant and worsening trouble that burdens the planet and threatens the world’s already derailed environmental balance. As virtually all electronic manufacturers rely upon “planned obsolescence” marketing practices, none of them produces models that were designed to be easily recycled. One of the factors that could create a financial incentive for e-waste recycling is the presence of gold in the circuitry, which is a valuable element that makes the whole process worth the trouble (and the cost). A team of researchers from Korea’s Advanced Institute of Science and Technology claims to have formulated a new polymer named “COP-180” that will revolutionize the field.

Until now, to recover the gold from the electronics, one would have to use a whole set of harmful chemicals, spend hours in each step of the process, create multiple solutions that do different things, extract foils, filter out stuff, dispose of the waste safely, melt the gold, and give it a usable form. All in all, it is a particularly troublesome process, albeit still a profitable one. The researchers believe that all of this can be pushed aside now, as the COP-180 features a very high affinity for gold and other precious metals like niobium, selenium, and ruthenium.

The new polymer is very porous and has the ability to capture between 94% and 99% of the gold present in the salvaged electronics in 30 minutes. The existing recovery methods can achieve up to 20% of capturing at the same time. Moreover, the new polymer costs about $5 per gram to produce, and each gram would be able to obtain a gold amount that would be worth around $65. This is a 13-times return, which is pretty amazing and also unprecedented in the field. To separate the polymer from the captured gold, one would still have to use acid, but the process remains a lot simpler.

Does this mean that amateurs could start salvaging electronics and engage in gold reclaiming chemical processes? The COP-180 polymer could become a game-changer, but the volumes that make the trouble worth it remain substantial, so the developments concern mainly the industrial-level e-waste recyclers. Computer parts and TVs contain the most amounts of gold, while smartphones or even the SIM cards have some traces of the valuable metal in them. For example, to extract a gram of gold from SIM cards, one would need approximately 680 kg of SIM cards. As for the smartphones, you would need three kilos of them to extract a single gram of gold. That would be around 20 devices for about $55 worth in gold.