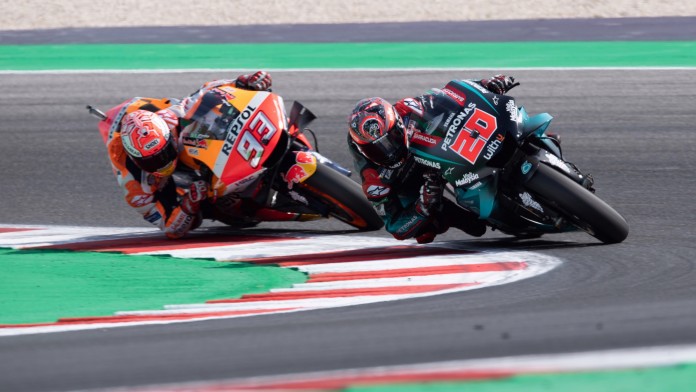 The MotoGP is back after its mid-season break, and one of the most traditional and historical races will return this weekend as the riders get ready to battle it out at the British Grand Prix. The 2022 MotoGP season has been full of thrills and spills, and this weekend's race will be another exciting affair.

The British Grand Prix was first held in 1977 and has been a regular fixture of the MotoGP calendar since then. There have been some truly incredible motorcycle races at the Silverstone Circuit over the years. Expect another closely contested and thrilling race this weekend.

This will be the 11th round of the 2022 MotoGP season. Through the first 10 rounds, there have been 6 different winners. Defending champion Fabio Quartararo sits atop the Riders' Standings heading into this weekend's British Grand Prix, with Aleix Espargaró and Johann Zarco currently second and third in the standings. Francesco Bagnaia is fourth, followed by Enea Bastianini in fifth. Quartararo's consistency is what has set him apart so far this season, and it will be interesting to see if he can continue that this weekend.

There are several great storylines to follow ahead of the return of MotoGP racing, and we could be in for a cracking affair at Silverstone. The 2022 British Grand Prix will cover 20 laps, with riders covering 73.4 miles. Fabio Quartararo won this race last year, and he will also be aiming to retain his crown this season.

The 2022 British Grand Prix will get underway with 2 free practice sessions on Friday, August 5, 2022. That will be followed by 2 more free practice sessions on Saturday, August 6. The qualifying session will also occur on Saturday, beginning at 09:10 ET. The main race is on Sunday, August 7, with the lights set to go out at 08:00 ET. Here we will give you all the information you need on where and how to watch the MotoGP British Grand Prix live from anywhere in the world. Check out our MotoGP Live Stream 2022 guide ahead of the race to get all the information you need about this season.

Due to the MotoGP's high popularity, it is broadcast in several different regions. But if you are traveling abroad or living where races do not air live, you will find it hard to watch due to geo-restrictions. But worry not because you can use a VPN to watch the 2022 MotoGP British Grand Prix live stream online. A VPN will give you a virtual location, making it possible to bypass the geo-restrictions.

Our recommendation is ExpressVPN, one of the world's most reliable, secure, and highly rated VPNs. Known for its high speed, ExpressVPN works with most streaming services, and you can find thousands of virtual locations to choose from. Some amazing offers are available with ExpressVPN, such as its no-questions-asked money-back guarantee. So make sure to try ExpressVPN for 30 days RISK-FREE.

You can subscribe to ExpressVPN (49% Discount + 3 Months FREE) by going to its website, filling out all the important details, picking out your preferred plan, paying the subscription fee, and downloading the app. Then you can select a VPN server from your home country and turn on the streaming service with broadcasting rights in the region. Once that is done, all the geo-restrictions will be gone, and you will be able to watch all the action from the British Grand Prix live seamlessly.

Fans can watch the 2022 MotoGP British Grand Prix live in the US on NBC Network, with CNBC set to televise the race. The race will start at 08:00 ET so make sure to wake up early so as not to miss out on the action. In addition, you can also use one of the many available streaming services to watch the race live.

fuboTV is a great way to watch MotoGP races live, and you can find CNBC on its various packs. Many dedicated channels are available on fuboTV, and you can watch hundreds of sporting events live. If you are a new subscriber, you will be entitled to a 7-day free trial offer on fuboTV.

Sling TV is another reliable and affordable option for MotoGP fans who want to watch races live. This platform carries CNBC on its News Extra add-on pack, which costs an extra $6 per month on top of the subscription fees you will pay for your pack. With this platform, you will not miss a single MotoGP race.

Last but not least is Hulu + Live TV, which has dozens of premium channels, and CNBC is included on the list. If you want to get Hulu + Live TV, Disney+, and ESPN+ for a combined fee of just $69.99 per month, make sure to purchase a subscription quickly because this offer will run out soon.

Traveling away from the US? You will need a secure VPN to watch this weekend's MotoGP action live. This is because all the above-mentioned streaming services are geo-blocked in other countries, but a VPN will help you bypass those restrictions as long as you use a US-based server.

BT Sport network has the broadcasting rights for the MotoGP in the UK, and there will be great excitement in the country of the British Grand Prix. Fans can watch the race live on cable TV and BT Sport's live streaming service. You can purchase the BT Sport sports pass for £25 per month to access all the sporting action available on the platform. The race will start at 13:00 BST for fans in the UK.

You will need a reliable VPN to watch the British Grand Prix live if you are traveling abroad. Using a UK-based VPN server will be important if you wish to access BT Sport and watch the MotoGP races while on the go.

MotoGP fans in Canada can easily watch the British Grand Prix live this weekend by getting a subscription to the REV TV service. This channel can be found on most local cable TV providers. The race will start at 08:00 ET/ 07:00 CT/ 05:00 PT for fans in Canada.

If you are traveling abroad but still want to watch the MotoGP action live, you will need to take the help of a working VPN. This is because all streaming services are geo-blocked, but a VPN will make it seem that you are operating from your home country. So you will be able to watch the MotoGP British Grand Prix live from anywhere in the world.

Australia-based MotoGP fans can watch the 2022 British Grand Prix live on Fox Sports. If you want to watch the race on the go, you can use the Kayo Sports streaming service. A subscription to Kayo costs $25 per month, and you will also be entitled to a 14-day free trial if you are a new subscriber. The race will start at 22:00 AEST for fans in Australia.

Want to ensure you do not miss any MotoGP action when you are traveling away from Australia? Make sure to have a trustworthy VPN that will help you bypass the geo-restrictions and make it possible to watch the MotoGP British Grand Prix seamlessly.