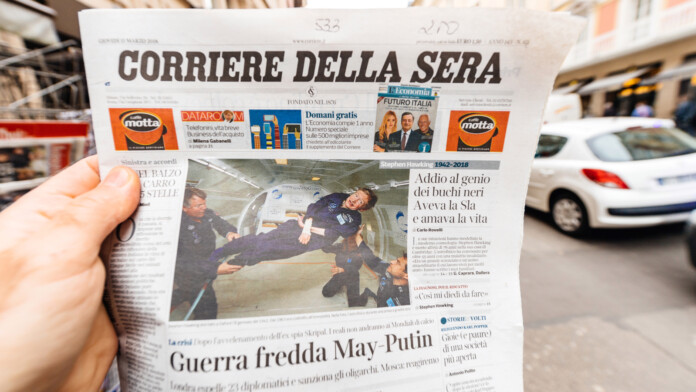 The Italian Postal and Communications Police is actively looking for those who pirate newspapers through Telegram and WhatsApp, as well as those who download the illicit copies. Reportedly, Italians have created a large number of groups on the two chat platforms where they upload the daily newspapers and share them with all members for a small charge. The authorities are reportedly closely monitoring three “key individuals” who are suspected of orchestrating or supporting the operation. One person is a 45-year-old man living in Sardinia, while another person is a 55-year-old from Milan.

The Italian papers have already modernized their distribution procedure, enabling people to pay a few euros for a monthly subscription, and getting the daily paper on any device they want. However, the third one of the suspects, who is an unemployed computer technician from Turin, has managed to steal the passwords to access the database where the papers are uploaded for subscribers. He was the one stealing the material and propagating it on WhatsApp and Telegram, causing substantial financial damages to the newspaper publishers.

It all started with the discovery of this hack by “L’Unione Sarda”, who filed an official complaint to the Postal Police. They then placed traceable markers on the downloaded copies, so they could determine the distribution path. After figuring out that this procedure took place in Telegram and WhatsApp, they asked the two companies to provide more information about the users on the bases of repeat and massive infringement. According to the Italian Federation of Newspaper Publishers, Telegram has denied even to provide an answer to their complaints.

The police though “followed the money”, so they are on the trace of the three suspects and are now looking to locate their infrastructure. Giuseppe Zafarana of Italy’s Guardia di Finanza stated the following: “We will identify and we will seize the servers, wherever they are, that are used for piracy and we will hit and confiscate the assets of those who enrich themselves by violating copyright.” According to Zafarana’s estimations, the groups are currently serving almost half a million pirate users, and many of them should expect to receive fines for taking part in the pirate operation.

Do you still read your daily stories on newspapers or do you use free news outlets? Let us know in the comments down below, or on our socials, on Facebook and Twitter.