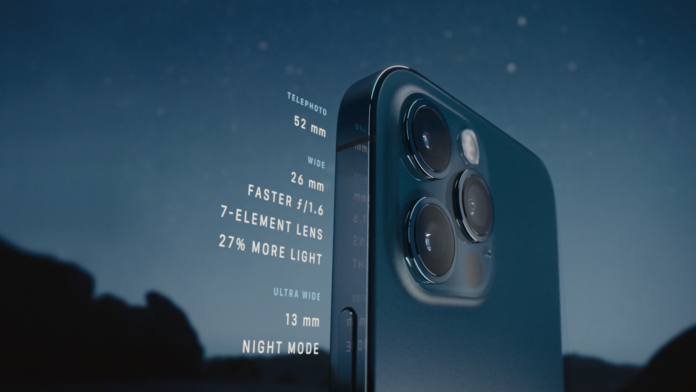 Apple's new iPhone lineup packs a pretty impressive camera layout in terms of resolution, aperture, and special features. While the iPhone 12 and iPhone 12 Mini do not differ too much in this regard, the jump to the Pro and Pro Max models is pretty significant.

Both the Mini and the regular iPhone 12 models come with a dual camera configuration, which is not that different from the previous generation. The Pro and Pro Max models introduce a third telephoto camera and a LiDAR.

In terms of video recording skills, iPhone 12 Pro is fully capable of Dolby Vision and HDR recording, and it also comes with a much higher dynamic range than its predecessors. The camera sensor in the iPhone 12 Pro Max is also significantly bigger than in previous models, which allows it to capture more light.

As far as new features are concerned, the new and improved Night Mode should allow you to take better pictures in low light conditions. SmartHDR 3 and Deep Fusion are available for all models.

Apple ProRAW Allows You to Edit Your Photos in Great Detail

In order to get the best pictures, the iPhone 12 Pro and iPhone 12 Pro Max come with Apple ProRAW. This software allows you to edit RAW photos and apply all sorts of adjustments in terms of brightness, contrast, and color levels.

If photography is your hobby, you already know how useful it is to have RAW images to work with instead of already compressed JPEGs.

Apple has also announced that they will be releasing an API for the ProRAW, which will allow third-party developers to use the software in their own apps.