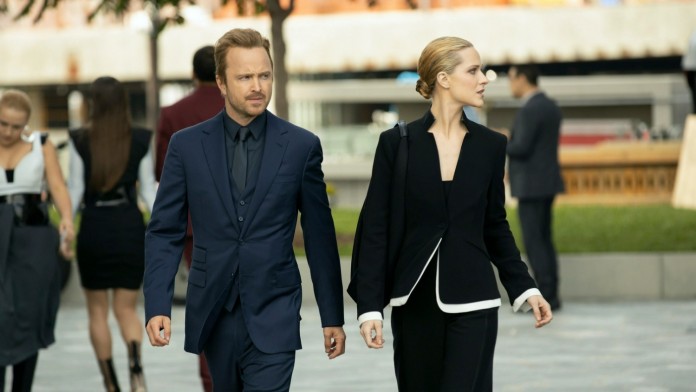 The fourth season of your favorite science fiction dystopian TV series is set to premiere soon, and we know you want to stream the episodes online on the go, even while traveling. We have all the detail you may be looking for when it comes to this series, including the release date, cast, plot, and the platforms where you can stream it, so let's see when, where, and how to easily watch Westworld Season 4 online from anywhere in the world.

The fourth season picks up seven years after the end of the third season. The story has been described as a "dark odyssey about the fate of sentient life on Earth" and has been confirmed to include an amusement park modeled after a romanticized version of the American Mafia in the 1930s.

Season 1 introduced the main character as a robot host called Dolores, a farmhouse damsel living with her father, programmed to be a submissive non-essential character who got continuously attacked by The Man in Black, one of the high-tech park's owners. In Season 2, she bypassed her programming and became her more violent alter-ego named Wyatt, who led the park host's uprising. The third season showed the ambitions and hatred Dolores had, and we saw her creating a copy of herself and putting it in Charlotte Hale's sleeve. This season she is Christina, an apparently human young woman who wakes up every day in a loop that looks similar to her life as Westworld park's Dolores. Moreover, the story she's writing sounds somewhat like the backstory Dolores had.

The series was created by Jonathan Nolan and Lisa Joy, and it is based on the 1973 film of the same name, written and directed by Michael Crichton. The fourth season stars an ensemble cast led by Evan Rachel Wood as Christina, Thandiwe Newton as Maeve Millay, Jeffrey Wright as Bernard Lowe, Tessa Thompsonas Dolores Abernathy, Aaron Paul as Caleb Nichols, and Ed Harris as William/The Man in Black. Aurora Perrineau, Ariana DeBose, and Daniel Wu joined the cast this season. Lili Simmons will guest star as New Clementine Pennyfeather, and we'll also see James Marsden return as Christina's date, after Teddy Flood died in Season 2.

Westworld Season 4 is set to premiere on Sunday, June 26, 2022, and you will be able to watch it on HBO at 9 pm ET. Each new episode will become simultaneously available to watch on the HBO Max streaming service. The latest season will have eight episodes that will premiere on a one-pe-week basis every other Sunday.

You can stream your favorite content through a streaming service as long as you are in your home country, but things change if you travel since almost all the streaming platforms are geo-blocked abroad and in some territories. There's a solution to this issue, and all you need to do to bypass these restrictions is watch Westworld Season 4 online with a VPN subscription. VPNs unblock these services by changing your virtual location and making it appear like you are back home.

If you want to easily unblock popular streaming platforms such as HBO Max, Hulu, Amazon Prime Video, Netflix, and others, we recommend you use ExpressVPN. This is one of the best tools on the market right now and has millions of subscribers. It offers over 3,000 servers in almost 100 countries all around the world, fast and stable connections, and strong encryption protocols, and it's quite easy to use, even for beginners. There's a very generous no-questions-asked 30-day money-back guarantee included, so you can try ExpressVPN for 30 days RISK-FREE.

You can also enjoy a significant discount when you subscribe to ExpressVPN (49% discount and 3 months FREE) and select the annual plan. To get started and, you need to create an account on their website, so fill in your details, make the payment, then download and install the app suited for your device or system. The last step is to open the VPN app, select a server from an area back home, and turn it on. Now that it's running in the background, just access the streaming service to watch Westworld Season 4 online from anywhere after the series premiere.

How to Watch Westworld Season 4 Online in the US

Westworld is an HBO original series that the network takes pride in. Since it will air on HBO, this means you will also be able to get the network as part of one of the several live TV and streaming services that have it in their offering besides HBO's streaming service. Let's see what your options are right now.

The most obvious option is to subscribe to the HBO Max streaming platform to easily watch Westworld Season 4 online. The standard on-demand no-ads plan is $14.99 per month or $149.99 per year, and the cheaper ad-supported tier is $9.99 per month or $99.99 per year. You can also become an HBO Max customer via subscription providers such as Apple, Google Play, and Roku.

You can get HBO Max as an add-on with the Hulu subscription, which is one of the cheapest options right now. The add-on is $14.99 per month, but the best part is that you will get a 7-day free trial to test the ad-free HBO Max plan before being charged. The On-Demand platform's subscription fees start at $6.99 per month, and there's a generous 30-day free trial included for new customers.

YouTube TV has HBO Max in its offering as well. When you select HBO Max as a Premium Add-On Network, you will get a 7-day free trial before being charged $14.99 per month. This live TV and streaming service offers a special promotion at the moment - you will pay $54.99 for your first three months and $64.99 a month after that and get a 5-day free trial.

Another live TV and streaming platform that lets you select HBO Max as a premium add-on is DirecTV Stream. You get a 3-month free trial for the HBO Max add-on, and they will charge you $14.99 per month thereafter. The subscription prices for the plans start at $54.99 per month for the first two months and then $69.99 monthly, and you also get a 5-day free trial.

HBO Max is not available everywhere, and this means you will face geo-restrictions in some countries and territories if you want to watch the series while traveling. This will stop being an issue if you use a capable VPN set to a server located in the US before accessing the streaming service.

How to Watch Westworld Season 4 Online in the UK

If you live in the UK, you'll be happy to know that Westworld Season 4 will be on Sky Atlantic and Sky's NOW streaming service starting on June 27. The subscription prices for the NOW platform start at £9.99 per month, and the service offers a 7-day free trial available for all new customers.

Traveling away from the UK? Since this service is geo-restricted, you will need to subscribe to a trustworthy VPN and set it to a server from a region back home, then access the streaming platform to watch the new episodes while traveling.

How to Watch Westworld Season 4 Online in Canada

The latest season will air on HBO in Canada. You will be able to stream Westworld Season 4 online quite easily in this country since you will find it on the Crave platform. Crave has HBO Max, HBO, (and also Starz and Showtime) included in the $19.99 a month subscription price, and you also get a 7-day free trial upon subscribing to the service if you're a new customer.

Keep in mind that this service is geo-restricted while traveling away from Canada. This means you will need to get a VPN subscription and run the app in the background in order to access the streaming platform from abroad, and you just need to select a server from a region back home and turn it on.

How to Watch Westworld Season 4 Online in Australia

If you live in Australia, you will be able to see Westworld Season 4 air on Showcase Australia and stream the new episodes on Foxtel Now and the Binge streaming platform on June 27. The Foxtel Now subscription costs $25 per month, and you get a 10-day free trial if you're new to the service. Binge has three plans starting from $10 per month, and new customers can enjoy a 14-day free trial.

If you're traveling away from Australia when the episodes premiere, you won't be able to access these platforms due to geo-restrictions. This problem can be solved if you use a good VPN set to a home location. Just turn the tool on before accessing the streaming service for this to work.