How to Watch Trixie Motel Online From Anywhere 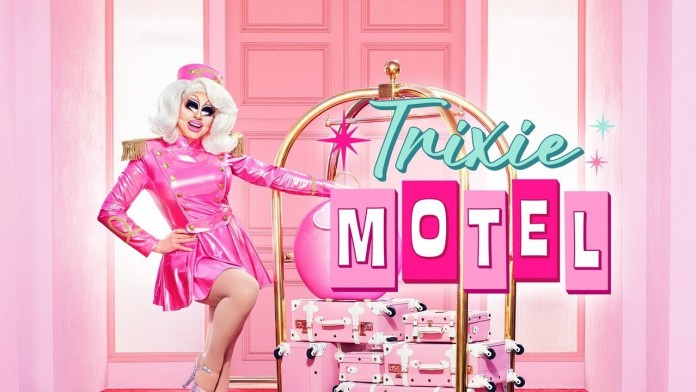 Famed drag queen Trixie Mattel is expanding her brand into a new realm - turning a mini-resort into a queer dream destination. It's pink, it's bold, it's chic, and it's outrageous. Trixie Mattel is one of the world's favorite drag queens, known for winning RuPaul's Drag Race and becoming a New York Times best-selling author. Her new renovation docuseries will take us on a trip as we see how she puts her touch on a small Palm Springs resort.

Trixie won't be doing this alone but alongside her longtime partner David Silver. Their $2 million investment is turned into a reality TV show for all of us to enjoy. Property Brothers, Drew and Jonathan Scott are the co-producers of this show, which makes sense given their expertise in the home renovation business.

The big renovation of the Coral Sands Inn will be a massive project, but David Rios will join Trixie as he takes on the role of project manager. At the same time, Dani Dazey will be the interior designer for the resort. Plus, we're getting a ton of celebrities to help out, too, including Iggy Azalea, Zooey Deschanel, Nicole Byer, Leslie Jordan, Lisa Vanderpump, Jonathan Bennett, and many others.

Trixie Motel premieres on June 3, 2022, on Discovery Plus, and we're getting all 8 episodes in one go.

How to Watch Trixie Motel Online From Anywhere

Watching Trixie Motel online is something that's going to be easy to do as long as you're not traveling abroad. However, if you want to travel, you're going to have to get a VPN to make things work because streaming services like Discovery Plus are geoblocked due to licensing deals. Thankfully, you can use a VPN to watch Trixie Motel online, as VPNs can help you bypass any blockades.

We recommend ExpressVPN, as this is a tool we've tried out quite a bit and know it can remove geo-restrictions for platforms like Discovery+, Netflix, Disney+, and even Hulu. ExpressVPN routes your internet connection through a server of your choice, encrypts the connection, and assigns a new IP address to your device. You can try ExpressVPN for 30 days RISK-FREE as the company offers a money-back guarantee.

You'll need to subscribe to ExpressVPN (49% Discount + 3 Months Free)  by visiting its website and creating an account. Once you've gone through all the steps and paid for your subscription, you can go ahead and download the native app for your devices. Log into your account and when you want to tune in to watch Trixie Motel, first connect to a server in your home country.

How to Watch Trixie Motel in the US Without Cable

Discovery+ is the home for channels like HGTV, Food Network, TLC, ID, Animal Planet, Discovery Channel and more. Get Unlimited Access to 55,000 episodes of 2,500+ current and classic shows. Choose between Limited Ads and Ad-Free plans under your budget.

You can also add Discovery+ to your Amazon Prime Video account. This should make it easier to manage your subscriptions if you regularly subscribe to services via Amazon. Discovery+ will cost you $4.99 per month on top of your Prime membership.

Alternatively, you can also get Discovery+ for free for 6 months with your Verizon subscription.

Discovery+ is a geo-restricted platform, which means you'll need a VPN if you're traveling abroad. When you're outside of the US, power up your VPN, pick a server located in the US and go ahead and load Discovery+ to watch Trixie Motel once the connection is established.

How to Watch Trixie Motel in the UK and Canada

Following Trixie Motel from the United Kingdom or Canada should be fairly easy since both countries have access to Discovery+.

If you're going to travel abroad, you have to use a VPN to access your Discovery+ account. ExpressVPN will bypass the geo-restrictions for you as long as you connect to a server located in your home country. Once the connection is established, access Discovery+ and watch Trixie Motel!

Can I Watch Trixie Motel in Australia?

Australian fans are going to have to find alternative ways to watch Trixie Motel since Discovery+ is not yet available here. Creating a Discovery+ account in the US, UK, or Canada while using a VPN may be the best way to do this.