How to Watch Tales of the Walking Dead Online From Anywhere: Stream the Spin-Off Series 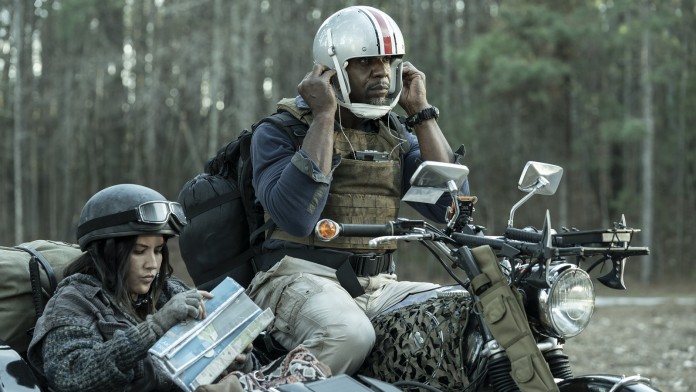 The Walking Dead fans will have to wait for a new season of the original series, but they will be happy to know a new spin-off series will premiere soon and will be available to stream online, even on the go or while traveling. We have all the information you may be seeking when it comes to this title, including the premiere date, cast, plot, episode release schedule, and the name of the platform that lets you stream it, so let's see when, where, and how to easily watch Tales of the Walking Dead online from anywhere in the world.

Like the whole series, this season is an episodic anthology made of standalone stories that will follow individual characters from The Walking Dead universe, both new and old. For example, Samantha Morton will reprise her role as Alpha from the main series, but this time viewers will learn the true back story of this character when she was known as Dee.

The first episode is a road-trip story where a reclusive prepper abandons his bunker in search of a female prepper from his past. Along the way, he meets an unlikely ally who is his polar opposite, so they team up in an effort to find their lost loved ones. Episode 2 is placed in a fast-paced, reality-twisting buddy-action heist, a disgruntled receptionist and her overbearing boss are trapped together as the city of Atlanta collapses under the Walker Apocalypse, forcing them to work together in order to escape the city.

In Episode 3, a mother evolves after she and her daughter escape violence and take refuge on a vintage steamboat, and the peaceful ambiance deteriorates when a coup attempt forces the mother to revisit her violent past in order to protect her child. Episode 5 takes us to a noir-ish fractured-memory thriller, where a young stranger suddenly wakes up in a dangerous, foreign town with no memory of how he got there, so he must piece together fragments of his broken mind to uncover why the townspeople accuse him of murder. The series finale is a haunting tale of an apocalypse-traumatized couple who may or may not be tormented by a haunted house, while frightening memories coupled with inexplicable phenomena in the house take a toll on the couple’s psyche and their relationship.

Tales of the Walking Dead Season 1 is set to premiere on Sunday, August 14, 2022, and you will be able to stream the episodes on the AMC Plus service. There will be 6 episodes in the first season, each one hour long, with a one-per-week release schedule, and new content usually becomes available to watch after midnight PT (3:01 am ET) on streaming platforms. The show will also air on AMC at 9 pm ET on Sunday, August 21.

How to Watch Tales of the Walking Dead Online From Anywhere

Nowadays, you can easily watch your favorite shows and movies online through one of the many live TV and streaming platforms available in your country. However, things change if you are traveling outside the country or even to some other states since geo-blockades are in place due to licensing deals. If you find yourself unable to access the series, you can easily circumvent this problem by getting a VPN subscription to watch Tales of the Walking Dead online. These tools unblock services by changing your IP address to a home location where the streaming app is available.

Our recommendation is to use ExpressVPN for the job since it is one of the best tools on the market right now and can easily unblock several popular streaming platforms, including Hulu, Netflix, AMC Plus, and others. It has millions of subscribers and puts thousands of servers in almost 100 countries all over the world at your disposal, and it's extremely easy to use and very reliable. This VPN offers a very generous 30-day money-back guarantee, so you can try ExpressVPN for 30 days RISK-FREE and ask for a refund if you're not satisfied with this tool.

Moreover, you can get your hands on a hefty discount as well if you for the annual plan when you just need to subscribe to ExpressVPN (49% discount and 3 months FREE) on their website. It only takes a few minutes to create an account, so enter your details and pay. Then, download the native app for your device or system. Once the installation is done, open the VPN app and turn it on after selecting a server located back home. The last step is to access the streaming service of choice to watch Tales of the Walking Dead episodes online from anywhere when they air.

Besides the AMC Plus service, you will also be able to stream this series' episodes through one of the various live TV and streaming services that have the AMC network in their offering since it airs on August 21 there as well, so let's see your options right now.

How to Watch Tales of the Walking Dead Without Cable:

If you want to watch it earlier, subscribe directly to the AMC Plus streaming service for $6.99 per month for the annual plan and $8.99 per month for the monthly plan. This service lets you watch ad-free on-demand original series from Shudder, AMC, Sundance Now, and more, and you get a 7-day free trial if you're a new customer. You can also add AMC Plus to your TV plan with Xfinity or Dish.

You can also add the AMC Plus channel to your Amazon Prime Video subscription as a Prime channel for $8.99 per month, and you also get a 7-day free trial for the channel if you are a new customer. The Prime membership itself comes with a hefty 30-day free trial, and it costs $14.99 per month after that.

The Sling TV already includes the AMC network in all of its three packages, but you can also add the AMC Plus pack to your subscription for $7.00 per month if you want to watch the show earlier. There are several other add-ons are available to customize your plan, and the service's plans start at $35 per month, but there's a special promotion running that offers half off your first month on Sling TV.

Philo is another great option, and the subscription price goes as low as $25 per month. It includes AMC in its offering, but even though you can customize your subscription with a few add-ons and premiums for an extra monthly fee, the AMC Plus pack is not featured. What's more, you also get a 7-day free trial on Philo.

If you love sports, a great option is fuboTV since it has several sports networks, and it also offers the AMC network in all of its packs. The subscription prices start at $64.99 per month, and you also get a 7-day free trial period on fuboTV, and you can also customize with premiums and extras.

If you are traveling away from the US, you may find these streaming platforms geo-blocked due to licensing deals. To lift geo-restrictions and access your paid subscription, use a capable VPN set to a server from your home region before loading the streaming service of choice.

How to Watch Tales of the Walking Dead Online in Canada

If you live in Canada, you will be able to watch Tales of the Walking Dead on the AMC network as part of your cable, satellite, or fiber-based TV subscription. To stream the episodes, subscribe to AMC Plus directly on the service's website or via the AMC Plus app for CA $8.99 per month or CA $83.88 per year.

Alternatively, you can add AMC Plus to your Amazon Prime Video subscription for $8.99 per month on top of the $9.99 per month Prime membership fee, and you get a 30-day free trial for both Prime and the channel. You can also add AMC Plus to Apple TV channels in the Apple TV app on your device.

This service is not available everywhere, so you may bump into a geo-blockade while trying to watch the series online if you are traveling. To access your streaming platform while traveling, use a capable VPN running in the background since it changes your actual location to one from back home.

How to Watch Tales of the Walking Dead Online in Australia

The easiest way to watch Tales of the Walking Dead if you live in Australia is to subscribe directly to AMC Plus on its website, and a subscription includes full access to Shudder and Acorn TV as well. It is also available on Apple TV channels through the Apple TV app or as a Roku Channel.

You can also add AMC Plus on Amazon Prime via Prime Video Channels for a monthly fee of $8.99, which includes a 7-day free trial as well. Prime membership costs $6.99 per month after its 30-day free trial.

Traveling away from Australia? All streaming services are geo-restricted in some other countries due to licensing deals, so you may not be able to access them. Subscribe to a good VPN and select a server located in Australia before accessing the streaming platform to bypass this blockade abroad.

AMC Plus is currently available in the US, Canada, and Australia, so streaming Tales of the Walking Dead using this service is not an option if you live in the United Kingdom right now. In the UK, The Walking Dead is hosted on Disney Plus, and Fear The Walking Dead and The Walking Dead: World Beyond are available on Prime Video, but there is no official announcement regarding where the new spin-off would land.

Another option is to learn how to watch AMC Plus outside the United States using a VPN subscription.