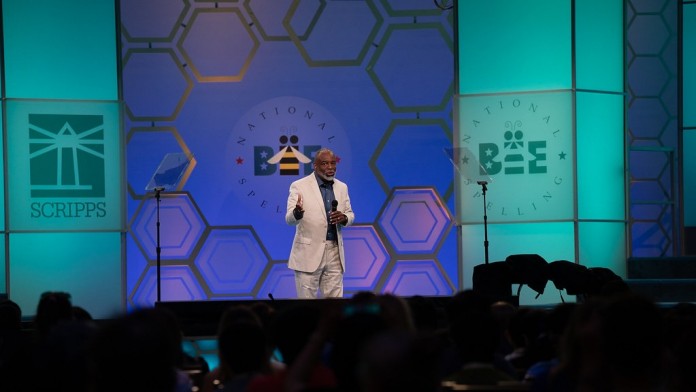 The Spelling Bee has a long history, and it's there to help students learn how to spell better and applaud those who excel. A bunch of newspapers joined together to host a spelling bee in 1925, which gave birth to the Scripps National Spelling Bee. Over 90 years later, their literacy campaign has reached millions of children.

For over 50 years, the Spelling Bee has been working with Merriam-Webster to find interesting words for competitors. This year, 234 spellers have advanced through local and regional bees and will compete against students from all over the United States and its territories. The spellers will compete in 4 segments to determine who takes home the Scripps Cup, climbing up through the Preliminaries, Quarterfinals, Semifinals, and Finals.

In addition to the US, there will be spellers from the Bahamas, Canada, Germany, and Ghana. The winner will take home a $50,000 cash prize, a commemorative medal, the cup, $2,500 from Merriam-Webster, a reference library, and more. Other prizes are also worth mentioning, as second place will get $25,000, third place $15,000, fourth place $10,000, fifth place will get $5,000, and sixth place $2,500. The 2022 Scripps National Spelling Bee will be hosted by Emmy and Grammy award winner LeVar Burton.

The Scripps National Spelling Bee Finals 2022 is scheduled for June 2, 2022, and will be available to watch on Ion at 8-10 PM ET. You can also watch it on Bounce, Laff, and TrueReal.

Watching the SCRIPPS National Spelling Bee Finals online isn't going to be super difficult, but making sure you can enjoy it from anywhere will be a tad harder. Streaming services of any kind, including US-based network websites, are geoblocked. Therefore, you can use a VPN to watch the SCRIPPS National Spelling Bee Finals, as VPNs will help you bypass any blockades and make it seem as if you're in your home country.

We recommend using ExpressVPN, a great app that works with most services, including Hulu, Disney+, and others. The tool works by routing your Internet connection through a server you choose and assigning a new IP address to your device. Thanks to its money-back guarantee, you can try ExpressVPN for 30 days RISK-FREE.

You need to subscribe to ExpressVPN (49% Discount + 3 Months Free) by visiting its website and signing up for an account. Once that's done, and you've gone through all the steps to pay for the service, you can download the app for your device or system. Once that's done, pick a server in your home country and then access a streamer to watch the Scripps National Spelling Bee Finals 2022 online from anywhere.

The Scripps National Spelling Bee 2022 finals are going to be broadcast by ION. You'll be able to stream the competition on ION Plus and Bounce XL.

Watching the Spelling Bee finals via ION Plus will be super easy to do via Samsung TV Plus (channel 1062) or Vizio Free Channels (channel 115). Basically, it's not going to cost you a penny, and you don't need to subscribe to anything, but you do have to be in the United States and use a Samsung or Vizio smart TV.

Bounce XL is also an option, and you'll find this one available for free via PlutoTV, while TrueReal is only available via antenna in select areas.

If you want to cut the cord, you should know that Bounce is available on Sling TV. Depending on your choice, you can get any of the 3 base plans offered by Sling TV, ranging from $35 to $50 (although you'll only pay half-price for the first month). Then, you have to add the Hollywood Extra plan, which costs $6 per month extra. You can, of course, add as many channel packs and premiums as you want, but Bounce is available via Hollywood Extra only.

Additionally, you can subscribe to Sling TV's Comedy Extra package, which costs $6 per month, as that one includes Laff, which also streams the Spelling Bee.

If you leave the United States for any reason, make sure you set up a strong VPN to watch the show. Choose a server located in the US and connect to it before accessing a streamer on your device.

Can I Watch the 2022 Scripps National Spelling Bee Finals in Canada, UK, or Australia?

Unfortunately, there's no direct way to watch the Scripps National Spelling Bee Finals in any of these countries. However, if you install a VPN on your smart TV, you'll be able to fool your TV into thinking it's in the United States, run an update, and watch the event on ION as a free channel on your Samsung or Vizio TV. Alternatively, you can use a capable VPN to connect to a server in the US and set up a Sling TV account to watch the 2022 Scripps National Spelling Bee.