How to Watch Leonardo Online From Anywhere 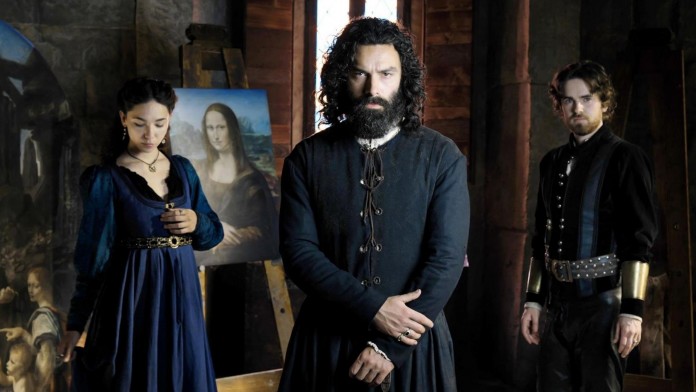 It's time to check out Leonardo, another interesting series coming to The CW this August, and we're looking forward to learning more about the famous High Renaissance artist, inventor, and scientist as the story unfolds. So let's check out how to watch Leonardo online from anywhere.

Originally broadcast on Rai 1, an Italian network, Leonardo premiered in March 2021. Since its premiere, the series has gained recognition in multiple countries. The series gives viewers a look at the life, work, and struggle of Leonardo da Vinci, one of the most talented and influential artists of all time. If you're a history buff, don't expect the series to accurately follow the events we know of da Vinci's life. In fact, the producers were open about their decision to purposefully move away from historical reality to insert fantasy elements, like murder accusations. It's a made-up story featuring the famous artist and other characters of the 15th and 16th centuries.

Leonardo features Aidan Turner as da Vinci, Matilda De Angelis as Caterina da Cremona, Freddie Highmore as Stefano Giraldi, James D'Arcy as Ludovico Sforza, Alessandro Sperduti, Robin Renucci, and more. The series was created by Stephen Thompson (Sherlock) and Frank Spotnitz (The Man in the High Castle), who said, "The intention is not just to say that Leonardo was a genius, but to really show why he was a genius and have the audience understand what it was that made him so brilliant and radical and centuries ahead of this time."

How to Watch Leonardo Online From Anywhere

Watching shows like Leonardo online is super easy nowadays, thanks to the numerous live TV and streaming services available. Things change when you leave the country, as all streaming services are geo-blocked, which means you cannot access their content from another country. Thankfully, there's a way to bypass this annoying issue when you're traveling abroad because you'll be able to stream Leonardo online from anywhere with the help of a VPN. VPNs have the power to change your IP address to match those in the location of your chosen server, thus making it seem as if you're in that specific location as well.

Our recommendation is to use ExpressVPN, which is easily one of the best tools on the market. With thousands of servers worldwide and great encryption protocols in place to protect your data, this is one of your best options. It can circumvent the blockades by platforms like Netflix, Hulu, and Disney Plus. Try ExpressVPN for 30 days RISK-FREE, thanks to its money-back guarantee policy.

You can subscribe to ExpressVPN (49% discount and 3 months FREE) on its website. The process takes a couple of minutes as you have to fill in your personal details and pay for the subscription. Next, download and install the app for your devices, and as soon as that bit is done, launch the app, choose a server located in your home country, and turn on the VPN. That's it! You're done, and all the geo-restrictions will now be gone.

How to Watch Leonardo Online in the US

Leonardo is a borrowed show, meaning that The CW didn't produce it. Nonetheless, it's great that the network that picked up the show in the US is The CW because it's super easy to find online.

How to Watch Leonardo Without Cable:

Hulu + Live TV is one of the best options you have to watch Leonardo online. The service features The CW in its plan, alongside numerous other networks. The subscription costs $69.99 per month, and you can enjoy Disney Plus and ESPN Plus alongside the dozens of networks. Of course, you'll also get access to the entire on-demand library from Hulu.

fuboTV is another great live TV platform that features The CW, among dozens of others offered in its plans. Prices for its plans start at $69.99 per month, and you can get whichever one you want as The CW is available in all of them.

YouTube TV also features The CW, among 120 other channels. You can add lots of cool add-ons to your subscription so you can enjoy more networks. The subscription for the service costs $54.99 for your first 3 months and $64.99 per month thereon.

Finally, you can subscribe to DirecTV Stream as it features The CW in all its plans. The subscription prices start at $49.99 per month for the first 2 months and climb to $69.99 per month after that. This is the cheapest option, and the highest tier, which includes over 150 channels, can get very pricey.

If you travel abroad, please keep in mind that you'll need to use a reliable VPN to access a streaming service and watch Leonardo on the go. Simply pick a server located in the United States when you turn on the VPN, and you'll be all set.

How to Watch Leonardo in the UK

If you're in the UK, you can stream Leonardo on Amazon Prime Video. The series premiered back in April 2021, so it's been there for a while. A monthly subscription to the platform will cost you £7.99 in the UK, and it comes with a generous 30-day free trial for new customers.

If you want to travel abroad, you'll have to remember that you need to use a capable VPN to access the content. Simply pick a server located in the United Kingdom, and you're good to go.

How to Watch Leonardo in Canada

Canadians can watch the series on ICI TOU.TV by subscribing to its Extra plan (ad-free) for $6.99 per month after a 30-day free trial. If you're a TELUS customer, the monthly subscription to Extra will be included in your package.

Traveling outside Canada? You can use a strong VPN to watch the series while abroad, as this tool will remove all geo-restrictions you may face. All you need to do is pick a Canadian server when you turn on the VPN and then access the streaming service to watch it.

How to Watch Leonardo in Australia

In Australia, Leonardo is available to watch via Paramount+. The service is available for AU $8.99 per month here after a 7-day free trial for new subscribers, which is a great deal.

Alternatively, you can add Paramount Plus to Amazon Prime Video for AU $8.99 monthly after a 7-day free trial. The Prime membership costs AU $6.99 per month and comes with a month-long trial period.

Should you leave the country, remember to use a good VPN to connect to a local server to enjoy the show from anywhere.