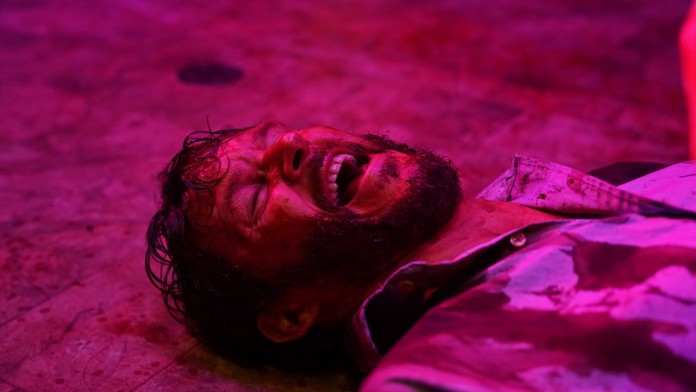 In the mood for horror? A Lovecraftian horror film will soon premiere, and it stars Oscar-winning J.K. Simmons (Whiplash, La La Land) and Ryan Kwanten (True Blood) in lead roles. We've got all the information you need, so let's check out how, when, and where to watch Glorious online from anywhere.

Glorious follows Wes (Kwanten), a young man who feels like he is losing control of his life after a traumatic breakup. His predicament worsens when he discovers himself stuck inside a restroom with an enigmatic character, Ghatanothoa (Simmons), whispering to him from an adjacent stall. As he attempts to flee, he comes to the realization that he is a willing participant in a situation that is much worse than he could have ever imagined. Glorious is an intimate indie horror movie full of twists and turns and is set primarily in a men's rest area bathroom. It has all the elements of a cult hit, being psychedelic, comedic, messy, and emotional at the same time.

The horror film is directed by Rebekah McKendry (All The Creatures Were Stirring) and written by Todd Rigney, Joshua Hull, and David Ian McKendry. Director McKendry said, "Glorious speaks to my adoration of Lovecraft, gore, absurdist humor, philosophy and the type of transgressive movies that leave you thinking I can’t believe I just saw that. It is a wild mix of horror, humor and heady moralistic concepts about our own existential realisations of who we really are, forcing each of us to stare into our personal abyss. And sometimes, the abyss stares back… and maybe has a favor to ask."

How to Watch Glorious Online From Anywhere

You can easily watch the title online if you're in your home country and have access to Shudder. However, if you're traveling internationally, you may find it difficult to access your streaming library because of geo-restrictions. To avoid this issue, you can watch Glorious with a VPN, as it will lift geo-blocks and make it seem you're back home.

Since ExpressVPN offers thousands of servers globally and can unblock the majority of streaming services like Netflix, Hulu, etc., we recommend using it. Additionally, it offers a money-back guarantee, so you may try ExpressVPN for 30 days RISK-FREE. It protects you from security breaches and preserves your online privacy with strong encryption methods. This VPN is easy to use, especially for new users, and it works with a wide range of devices, including desktops, routers, tablets, smartphones, and more.

You can go to its website and subscribe to ExpressVPN (49% Discount + 3 Months FREE) if you want to bag a great deal. After downloading the native app for your device or system, you can log in through a sign-in link sent to your email address or an activation code. Next, choose a server from your home country when you turn on the VPN, and then access a streaming service to watch Glorious.

How to Watch Glorious in the US Without Cable

Folks in the US can watch Glorious on the AMC Network's streaming service, Shudder. Plans start at $4.75 per month or $56.99 per year if billed annually, and new subscribers can enjoy a 7-day free trial on Shudder as well.

Stream the largest uncut, ad-free selection of horrors, thrillers, and suspense on all your favorite devices

You can also subscribe to streaming platforms that offer Shudder as an add-on or a premium network. Let's take a look.

Alternatively, you can add Shudder as a Prime channel on Amazon Prime Video for $5.99 monthly after a 7-day free trial. AMC+ can be added via an Amazon Prime subscription, too, for $8.99 per month after a week-long trial. The Prime membership will cost you $14.99 monthly, with a generous 30-day trial period.

Are you looking for a live TV streaming service with Shudder that is reasonably priced? Consider Sling TV; although monthly fees start at $35, you may currently take advantage of a deal that will save you 50% on your first month. After choosing your base plan, you may choose from two add-on services: AMC+ pack ($7 per month) or Shudder (premium channel) for $6 per month.

If you're traveling abroad, you will not be able to enjoy the film because most streaming platforms are geo-restricted. However, you can use a reliable VPN to lift any geo-blocks you may face. Pick a US server when you turn on the VPN, and you'll be able to watch Gloious on the go.

How to Watch Glorious in the UK

Folks in the UK can watch the horror film on Shudder for £3.99 per month or £47.88 yearly if billed annually. You can also enjoy a 7-day free trial after subscribing to the service.

Shudder can also be added as a Prime channel on Amazon Prime Video for £4.99 per month. Prime membership costs £7.99 per month. Both come with a generous 30-day free trial.

Traveling outside the UK? You can use a capable VPN to watch Glorious while abroad, as this tool will remove all geo-restrictions you may face. All you need to do is pick a UK server when you turn on the VPN and then access the platform to watch the film when it airs.

How to Watch Glorious in Canada

Canadians can also turn to Shudder to watch the title online for $4.75 per month or $56.99 yearly if billed annually, after a week-long free trial.

Alternatively, you can watch Glorious in Canada on AMC+ for CA $8.99 per month or CA $83.88 if billed annually. Viewers can also add AMC+ ($8.99 per month) and Shudder as a Prime channel ($5.99 per month) on Amazon Prime Video. Both come with a month-long free trial.

You can use a strong VPN to remove geo-restrictions and watch the movie when you're traveling abroad. Select a Canadian server when you turn on the VPN, and you're good to go.

How to Watch Glorious in Austalia

Shudder is available in Australia, too, so you can watch the film on this service for $5.83 monthly or $69.99 yearly if billed annually.

As you may know, most streamers are geo-restricted due to licensing agreements. You can use a trustworthy VPN to bypass this problem because it will lift all blockades you may face. It would be best to choose an Australian server when you turn on the VPN and then access a streaming service to watch Glorious on the go.