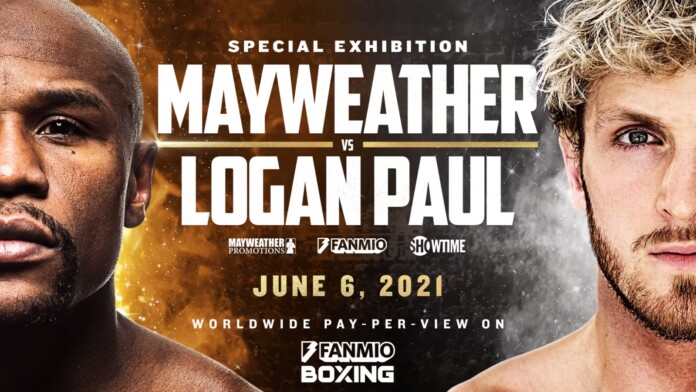 Boxing legend Floyd Mayweather makes his return to the ring on June 06 to take on famous YouTuber Logan Paul in a special exhibition fight. The event, which will be streamed live on pay-per-view, is set to be a historic one in the sport of boxing. And we have all the information you need on how to watch it live.

We could be in for a fascinating boxing match-up between Floyd Mayweather and Logan Paul, which will take place at the Hard Rock Stadium in Miami Gardens, Florida. The sheer excitement of the fight is already building up, even though we are still a month away from the actual event. With the worldwide following the two fighters have, and the mainstream attention they are getting at the moment, this bout between Floyd Mayweather and Logan Paul will no doubt generate more than one million PPV buys.

Who are Floyd Mayweather and Logan Paul?

Before we get into the details on where the fight will take place and how you can watch it, it is important to know a bit about the two people who will be taking to the ring for our entertainment. Floyd Mayweather and Logan Paul come from two completely different backgrounds, and this is a complete mis-match if you look at their experience, heights, weights, and record. This is going to be one of the most unexpected fights of all time.

Floyd Mayweather has won all 50 of the fights he has partaken in over the course of his glittering career. Known as the Money, Mayweather has seen it all and won it all. He has won 15 major world titles in five weight classes. But at the age of 44, he is definitely no spring chicken. And Logan Paul will be looking to take advantage of that.

Logan Paul and his brother Jake have been making a lot of noise in the world of combat sports in recent months. Fresh off Jake’s win over former UFC star Ben Askren, Logan will now go up against the man who is considered by many as the greatest boxer in history. The 26 year old became famous for his YouTube videos, before trying his luck in boxing. His record in boxing reads 0-1-1.

Logan Paul’s only fights have come against fellow YouTuber KSI. The two fought to a draw in an amateur contest in 2018, before KSI defeated Paul in a professional rematch one year later. But one thing the Pauls aren’t short of is confidence. And Logan will be hoping that his height and reach advantage will give him the edge over the veteran Mayweather.

Floyd Mayweather will no doubt be a man under-pressure. While the money on the line has tempted him to make his return, anything other than a comprehensive win over Logan Paul would be an embarrassing footnote to his legacy. So he will have to be at his best when the two collide on June 06.

Which fights are on the Floyd Mayweather vs Logan Paul undercard?

The undercard to Floyd Mayweather’s fight against Logan Paul will see Jean Pascal and Badou Jack lock horns for the WBA Light-Heavyweight title. Jean Pascal currently holds the belt, and defeated Badou Jack by a split decision when the two last met in 2019.

While Jarrett Hurd will be fighting Luis Arias. And former NFL wide receiver Chad Johnson, who played for the Cincinnati Bengals, the New England Patriots, and the Miami Dolphins, will take part in an exhibition fight. His opponent has not yet been announced.

How to Watch Floyd Mayweather Vs Logan Paul From Anywhere

As stated above, the eagerly awaited fight between Floyd Mayweather and Logan Paul will take place on June 06 at the Hard Rock Stadium in Miami, Florida. Since this is a pay-per-view only event, the only way to watch it is by buying the ticket for it. No live streaming websites, cable TV channels or VPN subscriptions will work, no matter what country you live in.

The only way to watch Floyd Mayweather Vs Logan Paul from anywhere in the world is by buying a PPV ticket on Fanmio or Showtime Boxing. Fanmio is an online event streaming service, while Showtime is a premium cable channel.

Getting a PPV ticket is easy. All you have to do is go to the Fanmio or Showtime website, click on the buy now option and purchase your ticket to watch the Floyd Mayweather Vs Logan Paul live from anywhere in the world.

A single PPV ticket for Mayweather vs Paul will cost $49.99. Getting a PPV ticket will not only give you access to the fight, but you will also get a limited and exclusive Floyd Mayweather Vs Logan Paul fight t-shirt. And if you live in the United States, subscribing to Fanmio will help you enter a draw which would make you eligible to get a video meet and greet with the two fighters. A total of 20 winners will be picked as part of the giveaway.

If you buy the fight on Fanmio, you can watch it on a variety of different devices. So you do not necessarily need a TV to watch the fight. You can also watch on your mobile devices, iPads, laptops, tablets or other digital devices. Fanmio is also available on Apple TV, Google TV, Fire TV, Android TV and all other smart TVs.