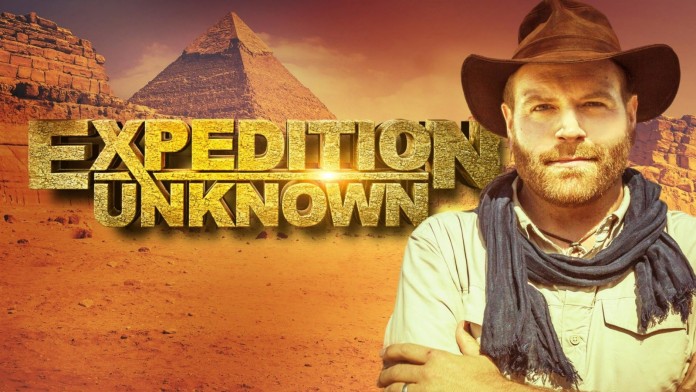 Discovery's 'Adventure Wednesday' lineup is back this summer, and viewers will be treated to all-new episodes of the reality television series Expedition Unknown. We have everything you need to know about the new season, so let's check out where, when, and how to watch Expedition Unknown Season 10 online from anywhere.

Expedition Unknown Season 10 continues with explorer Josh Gates' adventures around the globe as he reaches new heights and secret underground tunnels. Viewers can watch Gates and his crew rush to Poland to explore a newly-discovered Nazi tunnel inside an extinct volcano. They make historic discoveries while scouring for stolen art and other dark secrets. Some of his other notable expeditions we can expect this season include unearthing a mummy during an excavation in Saqqara, Egypt, a trans-Atlantic quest for "Lindbergh's Lost Rival" and his plane that vanished, a visit to Alcatraz to dissect the notorious 1962 jailbreak, experiencing the freezing conditions of the Donner Pass to solve America's most gruesome pioneer mystery, and much more.

Expedition Unknown Season 10 premieres on May 25, 2022, at 8 PM ET on the Discovery Channel. There will be 8 episodes this season and will be available to stream on Discovery+.

If you're in your home country and have a subscription to a live TV or streaming platform, you can easily watch your favorite shows and films online. However, if you're traveling abroad, you'll face geo-restrictions because of licensing deals and won't be able to access your streaming library. You can circumvent this problem if you use a VPN to watch Expedition Unknown Season 10 online because it will change your IP address to make it seem like you're back home.

Wondering which VPN would be best suited for you? We recommend ExpressVPN, as it can unblock most streaming services and has thousands of servers worldwide with fast and stable connections. It also protects your data and privacy online with best-in-class encryption protocols. Thanks to its no-questions-asked money-back guarantee, you can even try ExpressVPN for 30 days RISK-FREE.

You can easily subscribe to ExpressVPN (49% discount and 3 Months FREE) on its website. This is when you can proceed to download the native app for your device or system and log in through a sign-in link sent to your email address or an activation code. Pick a server from your home country when you turn on the VPN, and you'll be able to watch Expedition Unknown Season 10 easily.

How to Watch Expedition Unknown Season 10 in the US

If you're in the US, the easiest way for you to watch the series is on the Discovery+ streaming platform. The ad-supported plan costs $4.99 per month, with a 7-day free trial for new subscribers. Furthermore, if you want to watch ad-free content on this service, you need to pay $6.99 monthly.

Discovery+ is the home for channels like HGTV, Food Network, TLC, ID, Animal Planet, Discovery Channel and more. Get Unlimited Access to 55,000 episodes of 2,500+ current and classic shows. Choose between Limited Ads and Ad-Free plans under your budget.

We must also add that you can get Discovery+ for free for 6 months on Verizon, with select Unlimited plans. If you want to continue watching content on the platform after the 6-month trial period, you'll have to pay a monthly fee of $6.99.

Let's take a look at how you can watch Expedition Unknown Season 10 on Live TV and streaming services.

The first option is fuboTV - you can watch all episodes of the new season of Expedition Unknown on this service as it offers 100+ channels, including Discovery Channel. Plans start from $69.99 per month, and there is a 7-day free trial on fuboTV too.

Sling TV also offers the Discovery Channel with 2 of its plans: Sling Blue and Sling Orange + Blue. The most economical plan is the Sling Blue for $35 monthly; however, the service is offering a 50% discount on your first month and everyday price after that.

Viewers can also watch Expedition Unknown on Hulu + Live TV as it carries 75+ live TV channels, including the Discovery Channel. You can get Hulu + Live TV, now with Disney+ and ESPN+ for $69.99 per month as part of a special deal.

You can also turn to DirecTV Stream as it offers Discovery Channel with all of its packs. The cheapest option is the Entertainment package for $69.99 a month. However, for a limited time, the service is offering the pack for $54.99 per month for 2 months, and then full price after that. This offer is available for new customers and in select sales channels only.

If you're looking for an economical option, you can check out Philo because it carries 60+ channels, including Discovery Channel. You can get a subscription to this service for $25 monthly after a 7-day free trial.

Most streamers are geo-restricted owing to licensing agreements, so you can use a reliable VPN to remove all blockades if you're traveling abroad. Pick a US server when you turn on the VPN, and then access a streamer to watch Expedition Unknown Season 10 on the go.

Fans of the adventure series in the UK and Canada can easily watch the title on the Discovery+ platform, as the service is available in both countries.

If you're in the UK, you can get a Discovery+ subscription for £3.99 per month (Entertainment plan), with a 7-day trial period. If you're in Canada, you need to pay CA $4.99 per month for the ad-supported plan and CA $6.99 monthly if you want to watch ad-free content. If you're a new subscriber, you'll be entitled to a 7-day free trial.

Traveling abroad? You can use a strong VPN to watch Expedition Unknown Season 10 on Discovery+. This tool will remove all geo-restrictions you may face; pick a server from your home country when you turn on the VPN, and then access the streamer to watch the show easily.

Expedition Unknown: How to Watch Season 10 in Australia

Australians can watch Season 10 of Expedition Unknown on Foxtel Now - prices start from $29 per month for 12 months, after a 10-day free trial for new customers.

You may also be able to watch it on 9Now, as the platform offers a couple of the previous seasons. The new installment may drop there soon, so keep an eye out!

If you are traveling abroad, you can use a capable VPN to remove all geo-restrictions you may face. Choose an Australian server when you turn on the VPN, and then access a streamer to watch Expedition Unknown Season 10.