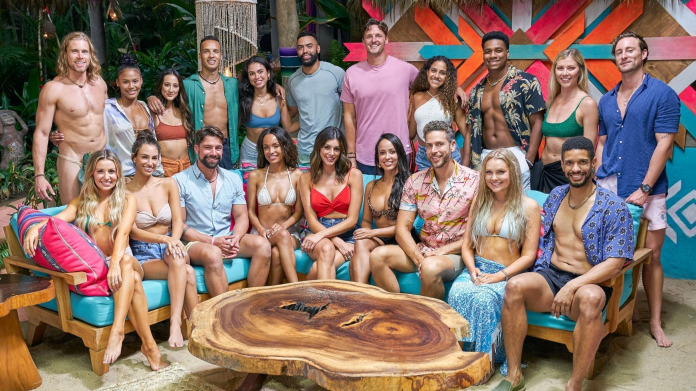 One of the most popular dating reality TV shows is back with a brand new season, and you will be able to stream the episodes online, even on the go or while traveling abroad. We have all the details you may need right now, including the premiere date, cast, plot, and episode release schedule, so let's see when, where, and how to easily watch Bachelor in Paradise Season 8 online from anywhere in the world.

Once again, the beach of the Mexican compound will be filled with Bachelor and Bachelorette contestants you know and love, contestants you love to hate, and people you swear you've never seen before in your life. The series starts with 19 cast members, with several other members set to appear as the season plays out.

Ashley Iaconetti (The Bachelor season 19) and her husband Jared Haibon (The Bachelorette Season 11) are already confirmed as future guests, and you can find the full list of announced participants below. Season 8 will be hosted by Jesse Palmer.

The Bachelor in Paradise 2022 premieres on Tuesday, September 27, 2022, on ABC at 8 pm ET. Each new episode will land the next day on the Hulu streaming service. The previous season had 12 episodes, and we expect the latest one to have the same number. We know we will get one new episode every other week on Tuesdays.

How to Watch Bachelor in Paradise Season 8 Online From Anywhere

You can easily watch content online with a subscription to one of the many live TV and streaming platforms available in your home country nowadays, but things change while you travel because these have geo-restrictions that will block your access abroad or even in some states due to licensing deals. There's an easy way to overcome this problem, and that is to use a VPN subscription to watch Bachelor in Paradise Season 8 online since this tool allows you to change your IP address and make it seem like you are back home.

We recommend ExpressVPN if you're looking for a VPN that can easily unblock several streaming platforms, including Hayu, Netflix, Hulu, and others. What's more, it's extremely easy to use, and you can even try ExpressVPN for 30 days RISK-FREE since this tool offers a no-questions-asked money-back guarantee. You will find high speeds, stable connections, strong encryption protocols to protect your data, no bandwidth caps or logs, and over 3,000 VPN servers all around the world at your disposal.

To get started, go to their website to create an account. You can get your hands on a significant discount right now if you select the annual plan when subscribing to ExpressVPN (49% discount and 3 months FREE). Enter the requested details, pay, and download and install the native app for your device or system. Next, launch the VPN app and run it on a server located in your home area. Lastly, load the streaming platform to watch Bachelor in Paradise Season 8 online from anywhere.

If you live in the US, you can watch the Bachelor in Paradise 2022 on the ABC network. This means you will also be able to stream ABC live online using one of the live TV and streaming services that include it in their offering. Let's see your options at the moment.

If you can wait a day, the official streamer for this show is Hulu, where prices start at $6.99 per month with the ad-supported plan and a 30-day free trial. If you want to live stream ABC, you will find the network in the Hulu + Live TV offering in both of its options, starting at $69.99 per month. Besides the Live TV library and the On-Demand service, you get ESPN Plus and Disney Plus for free right now as a deal bundle.

If you're a sports fan, then the fuboTV live TV and streaming service may be the best option since it mainly focuses on sports networks and also has some entertainment channels. Plans begin at $69.99 per month, and you can pick a monthly or quarterly option. All of them include the ABC network, and there's also a 7-day free trial on fuboTV if you're new to the service.

Another live TV and streaming service you can go for that has ABC in its offer is YouTube TV, where plans start at $54.99 a month for your first three months and $64.99 a month after that. You'll also get a 5-day free trial and several perks, and there are a few ways to customize your subscription with add-ons.

The DirecTV Stream live TV and streaming service offers the ABC network in all of its packs as well. Plans start at $49.99 per month for the first two months and $69.99 per month after that, and you also get a free trial if you're a new customer. Plus, Cinemax, STARZ, Showtime, and EPIX are free for the first three months.

You may also be able to see the show's episodes on the ABC website or app, but the latest season will land there pretty late, so we recommend you use one of the services above instead.

The streaming services you subscribed to back home are geo-blocked while you are traveling away from the US or even to some other states. If you encounter this problem, we recommend you subscribe to a good VPN and set it to a server located back home before turning to the streaming platform. For details, read the segment above.

Since almost all streaming platforms are geo-restricted, you may not be able to access this title while traveling abroad. You can easily solve this issue with a powerful VPN set to a location close to your home and turn it on before accessing the streaming service.

How to Watch Bachelor in Paradise Season 8 Online in Australia

If you live in Australia, you can catch the all-new season of Bachelor in Paradise US on September 28, fast-tracked and exclusive on the 10play streaming service. You can watch content for free here, as all you need is to have a free account on the platform.

Just remember that all streaming services are geo-blocked abroad, so you will need to lean on a capable VPN tool to lift all geo-restrictions while traveling. It's as simple as running the app via a server located back home.

How to Watch Bachelor in Paradise Season 8 Online in Canada

If you live in Canada, you may be able to watch the latest season of the reality show on Citytv since ABC content usually lands there, but we have no premiere date for Season 18 here. The most recent episodes are easy to watch for free when they land, but you will need to log in using credentials from your cable TV provider if you decide to watch them later on.

If you are traveling away from Canada, keep in mind that all streaming services are geo-restricted, so we recommend you use a capable VPN and select a Canadian server before accessing the streaming platform from abroad.