FinalCrypt Releases Third Bugfix for 4.0 and Gets Ready for Deployment 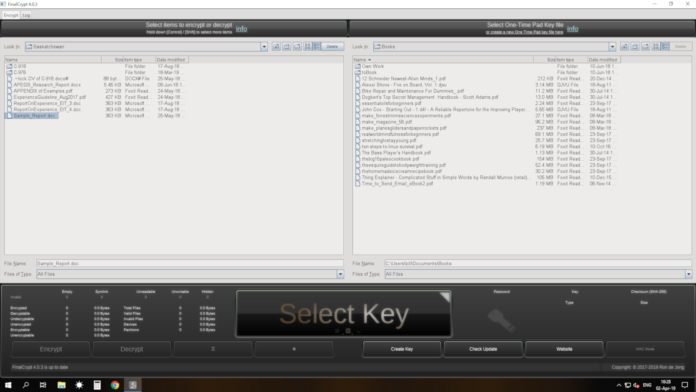 With FinalCrypt 4.0.3 having been released now, people should feel free to grab the “uncrackable” encrypter. The application is now stable and has worked well during our testing, only requiring Java, and one of the three major operating systems to run (Linux, Mac, Windows). The tool is open-source, and entirely free of charge, and can encrypt or decrypt four billion files and directories in one go, so it most probably can cover your filesystem. The encryption key size is set at 256 MB by default, but FinalCrypt allows the user to increase its size to as much as they like, even entering the terabyte territory.

From a technical perspective, FinalCrypt is very different when compared to other encrypters, as it uses the “one-time pad” (OTP) approach. This technique is the only one that can’t be cracked, no matter how powerful the systems that try to break it are, even if they boast infinite computational power. This does not hold with other encryption techniques that get deprecated and obsolete as we move into an age of stronger computational units. For example, the AES-256 encryption was cracked in 2017. With the arrival of quantum computing, all asymmetric encryption methods are expected to be rendered worthless as well, thanks to Shor’s algorithm.

This doesn’t mean that the OTP comes with no drawbacks at all, with convenience being the biggest thorn as the encryption key which is the pad, needs to be as large as the encrypted message, or our files if you like. However, FinalCrypt 4 makes the job as user-friendly as it gets, with a simple two-pane UI, spacy sound effects, and even synthesized vocal guidance. Moreover, FinalCrypt protects you from the scenario of someone else having your OTP key, as it allows the user to set up an additional password for accessing it.

Beware of the fact that once you create the key and choose what files you want to encrypt, the original ones will be wiped from your disk, and their encrypted counterparts will take their place featuring a characteristic “.bit” suffix. The password setting step is optional, but we encourage you to take it. After that, the encrypted files can be decrypted by entering the password, selecting the encrypted files, selecting the correct key, and clicking on the “Decrypt” button. For those of you who need the absolute robust and mighty encryption out there, FinalCrypt is something worth giving a try.

Are you a fan of OTP encryption, or do you find it to be too incommodious for your needs? Share your thoughts in the comments section below, and don’t hesitate to do the same on our socials, on Facebook and Twitter.