Dharmesh Mistry, Temenos, on AI and the Future of Banking – Interview 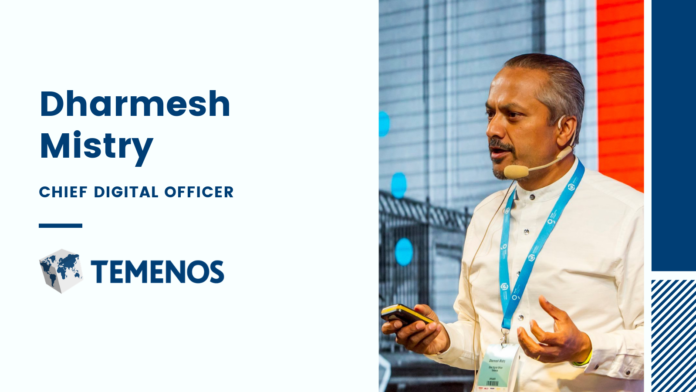 In today's world, any banking operation is highly dependable on highly complex technologies, such as those that Temenos has helped create and implement over the years. Chances are, that when you go to your bank, you're using some of their technologies since a good chunk of the world's top banks uses Temenos software.

During the Bucharest Tech week in late May, we had the opportunity to have a great chat with Dharmesh Mistry, the company's Chief Digital Officer. We discussed a lot of topics, from the way Artificial Intelligence will shape the world of the future, the price we pay for having such technologies integrated into our lives, and the future of banking, among other things.

TechNadu: Let's start with you telling us a bit about what you do and what your company does.

Dharmesh Mistry: Temenos is the world’s leader in banking software. More than 3,000 firms across the globe, including 41 of the top 50 banks, rely on Temenos to process both the daily transactions and client interactions of more than 500 million banking customers.

When we were acquired at the end of 2012, my first focus was on channel banking. In the space of about 18 months, we replaced 20,000 screens within Temenos – across all business lines – to go onto our platforms, so that they could be totally responsive. These were all kinds of screens, whether at a branch or contact center or on a mobile, tablet, or big desktop screen. This was a huge task, which enabled us to become one of the global leaders in channel banking.

My job was then really to continue defining and refining our digital strategy. We identified that, within banking, there would be a separation between manufacturing and distribution. We, therefore, needed to have a standalone platform that allows us to manage the entire customer.

Historically, banks have had siloed systems for each financial function. They would have, for example, a core banking system to manage current accounts, as well as different systems for managing credit cards, mortgages and loans. These all had a customer record each, and they all managed the customer lifecycles separately in their systems. If a customer changed address and had three products, for example, then the banks would have to update the data in three systems, in three different ways.

To address this, we have developed our cloud-native, cloud-agnostic Temenos Infinity front office product. With this product, you know you have one, holistic relationship with the customer, with all key information in one place. If the customer changes address, you do it once in the front office platform, and then the data is passed back to the relevant back-office systems. You can really manage your customer relationships – just like Amazon does.

If you go to Amazon to buy a book and you buy some trainers, and you buy a TV - you have one checkout process. And that’s similar to Temenos Infinity – it’s the Amazonifcation of banking.

As part of my work, I've also developed the vision and strategy around conversational banking and AI. Banks have to be in a much more data-driven mindset in order to truly understand each customer. With AI, machine learning and predictive analytics growing in stature, data is the most valuable asset an organization holds – but is also the most complex to leverage.

Banks should actually look at patterns of data and start to replace hard-coded rules with data-driven AI to correspond to the individual circumstances of the customers. This is conversational banking – using data to create tailored conversations with those who use your services.

TechNadu: I saw the video you shared during the [at Bucharest Tech Week]. It was quite impressive and scary at the same time. Well, I know what the banks can do with all the data, but what can the customer do about his or her privacy when we talk about this much data being handled by banks for various operations?

Dharmesh Mistry: It's a very good question as data and privacy are key issues. However, do you have a Facebook account? Or what about Google? Google knows so much about us from the many internet searches that we do. It knows where we want to go, what our interests are, and much more. Google has a phenomenal amount of data - but are you worried about using Google?

TechNadu:  Well, it depends. When it comes to banking, especially in the U.S. the data could influence the health insurance offers people get, or their banking credit. It would probably influence me less here because we don't have that kind of system, but it would influence them a lot more, for instance.

Dharmesh Mistry:  Sure. Banks must certainly behave responsibly with data. They should give as much control to the customer regarding the usage of personal data as the customer wants to take. The regulations (such as GDPR) are already there to protect the customer – and banks have to abide by them.

While Open Banking opens up the competition, GDPR closes it back in to help customers manage their privacy.  The real opportunity to be grasped here, though, is to make customers understand how much better banking can be if they give banks their data.

As with credit history rating scores, which are based on customer information, banks need to do more of that stuff – namely finding ways of leveraging the data for the customer's benefit.

TechNadu: So, basically what separates us from this kind of system from, let's say, China where they have social scoring, is the option to say "no," maybe?

Dharmesh Mistry: That’s correct. However, that's an opt-in as well. At some point, more people are going to be opting in, especially if they are renters because it's going to give them options that they didn't have from banks. In fact, that's one of the reasons why China has opened up the market somewhat because the banks weren't giving as many options as their innovative competitors.

Dharmesh Mistry: This is like a race at two ends.  At one end, we have big banks trying to digitize. They're trying to scale down their entire cost while driving up their innovation. They already have the customer reach, brand value, a level of good trust, a lot of data, as well as a breadth of products. They also already have deep knowledge of the regulatory landscape. So they have a lot going for them, but it's on a heavy cost basis and in a traditional, slower approach to banking.

On the other hand, you've got very lean players, small organizations - anything from four to two hundred people - that have one or two products of their own.

Scaling is, of course, the hard part,  rather than launching – because launching is in itself pretty straightforward. Scaling the product and getting customers is both tough and costly.  As they start to get traction with customers, things like regulatory issues will catch up with them. We've seen this happen with some (but not all) newer firms, who haven’t had to manage regulations for many years.

I certainly don't think all banks will disappear, though. Most banks will transform to some level, while fintech will evolve to look much more like some of the banks. They will likely meet in the middle somewhere.

TechNadu: In the long run, since banking is all about trust, do you think it's going to be the traditional banks that go into the digital world, or will continue to lead over the new fintech companies that have a lower trust level, like Revolut, for instance?

Dharmesh Mistry: In my opinion, people use Revolut because they love and trust the product.  It’s the same with Monzo. Just look at their fanbase! The service can go down and go wrong, and people will simply say: "Don't worry, this stuff happens." When you get to that level of trust, you can be a new organization in the market.

We see a different customer response, however, when it comes to more traditional organizations. While customers may not trust these banks to drive innovation or give the best offer in terms of price, these banks have been around for a long time and people have been banking with them for years. They have brand power – which means customers may not switch accounts. What they may do, however, is use a fintech account alongside their existing bank, and I think we’re seeing a lot of that already.

TechNadu: What do we do about security because cyber attacks are targeting the financial industry for obvious reasons. The fintech industry is also facing these same issues. How do we keep everyone safe - all the data, all the money?

Dharmesh Mistry: Internet banking has been around since ‘96, so people are already used to remote banking. I believe that,  increasingly, people trust online services because so much of their personal data is already in the hands of companies like Google Apple and Facebook, as well as with their bank. Plus, I think people can see that there’s more security in place with banks than at social media firms.

The facts speak for themselves – if you look at the investment that goes into cybersecurity by cloud providers, versus that by banks, it's much greater.

TechNadu: AI has become an important element in many industries, including banking. How would you see its current and future implementation? How far do you think it can go?

Dharmesh Mistry: I think it can go scarily far. But we need to differentiate between "general purpose artificial intelligence", which remains a long way off - and "special or single purpose AI." Are we seeing artificial intelligence for specific tasks like fraud detection, credit risk assessment, customer engagement, for example? Certainly – and some of those things are already paying massive dividends, such as AI data analysis within marketing and sales.

TechNadu: How far into the future do you think that video of yours is going to happen?

Dharmesh Mistry: I think we see elements of it already at play. I'm a fan of Cleo and Plum and this kind of chatbot conversational banking, which already exists. While the number of engagement rules needs to increase significantly in the long run for these to develop fully, I definitely think we’ll see more of things like Cleo and Plum.

Automation will also be key when it comes to rules and regulations, which can be codified. There’s no doubt that a machine is going to adopt those rules much more strictly and consistently than a human being ever can. The next biggest benefit is scalability. Once you've got the software working, you can scale it for different purposes. You can't do that with people easily.

Alexa and Siri, for example, have single-purpose AIs helping you with your diet, exercise, your cooking, cleaning – and even the gardening. At some point, we’ll see these single-purpose ecosystems collaborate and generate the first sentiments of a general-purpose AI. Indeed, Alexa is potentially well on that route already.

Do you agree with what Dharmesh says? Let us know by dropping a comment in the section below the article. Share the interview with others if you have the time and follow TechNadu on  Facebook and Twitter for more interviews, tech news, guides, and reviews.