Broadcom Will Not Acquire Symantec After All as Negotiations Have Ceased

Two weeks ago, we reported about Broadcom Inc. being very close to acquiring Symantec Corporation as part of its strategy to enter the growing software market. Based on Bloomberg reports, the negotiations were in their final stages, and few things seemed capable of leading to an unfortunate result. However, the advanced talks between the two entities didn’t come into fruition as it seems, with Symantec insisting on a higher price per share than Broadcom was willing to offer. This means that the chip manufacturer won’t absorb the cyber-security firm after all.

As reported by the CNBC, Symantec asked $28 per share, but Broadcom thought that this demand was based on the fact that their private deal was made public. As we saw at the beginning of the month, Symantec’s value went up immediately following the rumors of the acquisition. This publicity wasn’t helping Broadcom, narrowing their movement space in the negotiation field. What Broadcom offered was $26.75 per share, which was still higher than Symantec’s figure that the share value reached lately, and considering the due diligence costs that burden Broadcom, this was probably a fair offer. 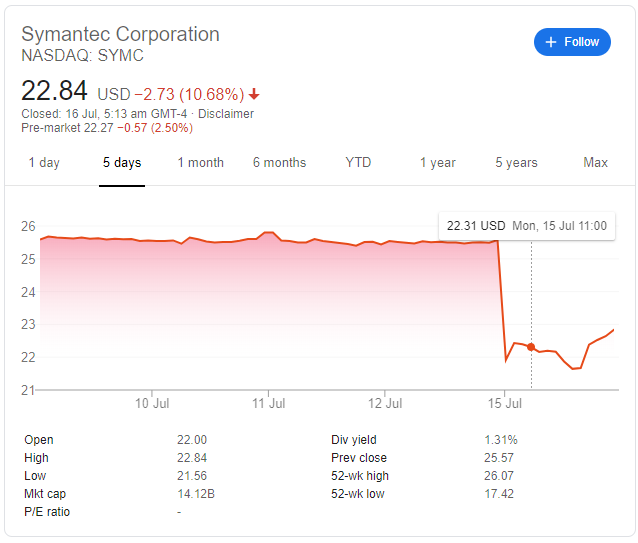 With the deal falling through, Symantec’s share value dropped to $22.84 with a negative prospect for the upcoming period, while Broadcom’s price started going upwards. This indicates that Broadcom’s shareholders didn’t believe that the acquisition of the turbulent Symantec would be an undoubtedly good move by the chip-making giant. Symantec remains headless and still in a period that is marked by an effort to stand back at their feet following bashing financial investigations that unveiled naughty accounting. Now that the Broadcom deal didn’t go forward, both companies will have to develop a new way to move forward.

Broadcom is still looking to buy a software firm, preferably one that is engaged in cybersecurity, as this is the gap in their portfolio. CNBC claims that TIBCO, the analytics software firm is in the Broadcom shortlist, but these are unconfirmed rumors at this point. As for Symantec Corporation, this is not exactly a downward spiral that they are entering into, as the company remains a high-profile vendor with numerous Fortune 100 clients. However, this latest development signifies that they are entering a more urgent age where their business strategy for the future needs to be formulated and incorporated shortly.

Do you think that Broadcom did the right thing in this case? Let us know where you stand in the comments down below, or on our socials, on Facebook and Twitter.