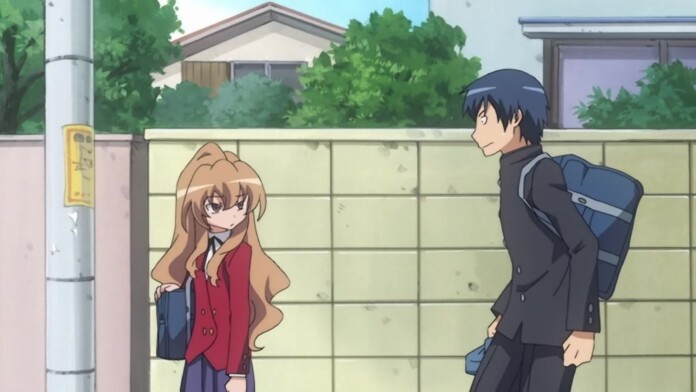 The language of love may be universal, but for many people, it loses its shine if they have to read subtitles! Dubbed anime has developed a bad reputation over the years, but with the rise in popularity of anime as a whole, the quality of dubs has improved by leaps and bounds - at least when it comes to English dubs, that is, we can't speak to the situation with other localizations!

As such, we thought it would be a nice gesture to list some of the best dubbed romance anime you can watch today, where both the story and the actual dub are good enough for a watch the next time Valentine's Day rolls around.

While BL (Boys' Love) might get the most attention, there's a strong yuri (girls' love) culture in the medium as well. So if romance between girls is your thing, you'd be remiss in skipping over the rather racy Citrus.

Yuzu Aihara is a fashionable, fun-loving city girl whose mother remarries. They relocate, and she has to go to a much more conservative school, which doesn't allow her to express herself in quite the same way. The school's student council is especially strict, but it turns out she's got the hots for this blonde wild child, something which her ultra-strict dad would not be OK with.

While Citrus is definitely designed to the sort of romance story that gets watchers hot under the color, there's a sincere and conflicted relationship to explore here. Oh, and the big "twist" to this plot is that the two girls are stepsisters and share the same room. It's not really a spoiler. You probably figured it out before we said it.

This one is a comedy romance with a pretty hilarious premise. The heroine of this story is a big-time otaku when it comes to Boys' love manga. A little on the heavy side, she gets depressed and loses weight, which suddenly makes a bunch of hot guys develop an interest in her.

The problem is, she has no interest in being the object of boys' desire. Instead, what she really wants is to see these boys be romantic with each other. A lot of the humor in this show derives from flipping the usual reverse-harem tropes and subverting the outcomes you might expect. If you're not in the mood for something deep, this shojo romantic comedy is a great palate cleanser. As for the dub itself, it's competent at getting the humor across, so it's a win in our book.

The setup for this show is pretty darn creative. The main character goes to visit his grandmother, who lives in a more rural part of the country. There he nearly drowns in an inland sea, only to be saved by a mermaid. So far, so good, right?

Only it turns out that the mermaid in question is the daughter of the local Yakuza (Japanese organized crime) leader. Yes, the Yakuza in this show are also mermaids. Mermaid law says that because the girl showed her mermaid form to someone outside the family, she has to be executed. However, his mother finds a loophole: if the two kids marry, then the family issue is solved. Yakuza fish-dad isn't too pleased with this arrangement and starts plotting the demise of our unlucky protagonist. As you can imagine, hijinks ensue.

This show is a little different from most fantasy romance anime since it's not an isekai. Instead, the heroine of this tale is a fully-fledged, born, and bred citizen of the Kingdom of Tanbarun. Shirayuki is a herbalist with rare and distinctive red color.

The prince of the kingdom sees her hair one day and is instantly interested. Ordering her to become his royal concubine, she cuts her hair and flees to the neighboring kingdom. Here she encounters their prince, but he turns out to be a much nicer person.

She tries to settle down in this new kingdom, and a genuine romance begins to flower between her and this new prince, but the royal suitor she escaped hasn't given up yet and will stoop pretty low to get what he wants.

ReLIFE has a pretty interesting premise, although perhaps some troubling implications as well. Do you ever wish you could go back in time and relive your childhood with your adult brain and knowledge? In ReLIFE, the technology exists to make someone look like they should be in high school on the outside, though sadly, people who take the drug are still the same age on the inside. So if you're 35, you won't be making the 100m sprint with your middle-aged lungs.

The main character of ReLIFE, Arata, is a bit of a pathetic character. He's 27 years old and unemployed. He's also a NEET, someone not actually looking for a job. One day a man named Ryo shows up and offers Arate a job. The catch is that he has to take part in an experiment. He needs to take a drug that will make him look young again on the outside, and this will let him go back to high school, where the idea is that he can fix whatever's wrong with him psychologically.

As you can imagine, being a grown man in a teenager's body raises some issues. Arata, for example, isn't supposed to get romantically involved with high schoolers. You'll have to watch the show to see how well he navigates that particular gauntlet.

This show has flown below too many romance anime fan radars, and that needs to change. Set in England and therefore copacetic to an English dub, yet strangely the dub cast has American accents. It's a missed opportunity, but in general, the dub is acceptable otherwise.

This is an excellent dark fantasy tale about a Japanese girl who lets herself be auctioned off at a supernatural auction. She's bought by a creature who wants to learn more about what it means to be a human. The girl is also what's known as a "sleigh beggy." This means she has immense magical potential, but the constant flow of magic into her body severely shortens her lifespan. The ancient magus takes her in, both as his betrothed and as his apprentice. By providing her with artifacts and training her in the use of magic, he hopes to extend her lifespan.

The Ancient Magus' Bride is a hauntingly beautiful show that's filled with both wonder and dread. If you like the mythology of the British isles and appreciate fantasy with a dark, romantic edge, then the dubbed version of this show is an excellent choice.

Inuyasha is a classic isekai anime where a girl named Kagome Higurashi falls down a magic well and ends up in a parallel universe. There she discovers that she's the reincarnation of a powerful priestess and keeper of a powerful magical jewel in her body. She also encounters a half-demon boy by the name of Inuyasha pinned to a tree by an arrow fired by Kagome's previous incarnation. She frees Inuyasha to to defeat a demon trying to steal the jewel from her, but Inuyasha soon turns on her to take it for himself.

Using a cursed necklace, she manages to subdue Inuyasha and enlist his help, albeit against his will. A bird steals the jewel, but it is destroyed by an arrow, scattering the jewel in many fragments, which fall into the hands of various enemies. Thus we have the motivation for the pair to go off on an adventure - but of course, a big part of this show is the slow-burning, back-and-forth romance that develops into what's often considered one of the most iconic couples in anime.

Spice and Wolf is a laid-back supernatural romance story following the adventures of a traveling merchant and a wolf goddess who wants to return to her homeland and family. Holo, as she's named, hitches a ride in the merchant's wagon to escape the town where she's been blessing the harvest for centuries.

They travel together, having various adventures and growing closer as time passes. However, man and goddess are very different. Perhaps the most interesting thing about this show is how an immortal supernatural being and a short-lived human can learn from and appreciate each other.

This show has a laid-back pace, lots of witty banter, and the occasional high-stakes climax. Overall it's definitely aimed at a more mature audience, but even if you usually prefer shonen or shojo material, Spice and Wolf is worth watching. It's not a particularly long show, but it's definitely a great story.

This is one of our personal all-time favorite shows, and it's now available as an English dubbed version. While we don't think the English dub is quite as charming as the Japanese original, it's still pretty good! Chobits is a product of CLAMP!, a studio that's consistently produced some fantastic titles, such as Angelic Layer, Magic Knight Rayearth, and Cardcaptor Sakura. So it has that distinctive Clamp art style and story vibes going on.

Hideki Motosuwa is a farm boy who fails the entrance exams for university, so he moves to Tokyo in order to attend a "cram" school that helps students get into university for real. In this world, personal computers exist in a human form. So they are essentially personal assistant robots.

Hideki finds an apparently abandoned and broken "pasokon" and takes her home. Upon activation, it's apparent that this is no normal computer, but Hideki doesn't know anything about them, so he's clueless about the fact. Naming her "Chii," he enlists the help of new friends to help figure out who Chii is and where she comes from while struggling with the social stigma of having feelings for a humanoid computer.

Toradora! isn't just one of the best dubbed romance anime; it's one of the best anime series in any genre. We've listed it in our other top lists as well, but since it's got a good dub and happens to be a top anime in this genre, it deserves to be on the list.

Toradora tells the story of two misfit high school students. Ryuji is a boy with a mean face but a gentle heart. Unfortunately, people tend to judge him on his looks and assume he's not a nice guy. Taiga is a girl with violent tendencies and a bad reputation in the school as the "palm-top tiger" due to her small size. Ryuji and Taiga have crushes on each other's best friends and come up with a plan to help one another make love happen. However, in doing so, they become closer and closer, leading up to some hard choices and confused feelings.

Although it's hard for us to hear the English dub voices for characters we originally encountered in the Japanese subbed version, it's a competent version of a fantastic show. Just by virtue of being Toradora, this might easily be the best dubbed romance anime.

Whether you like romantic adventures, comedies, tragedies, or any other form of romantic story, there's probably an anime that fits the bill. Sadly, when it comes to dubbed romance anime, not all of the best shows have been released in English or languages other than Japanese. Nonetheless, there are plenty of quality shows that you won't need subtitles for, and their English casts do an admirable job in general.