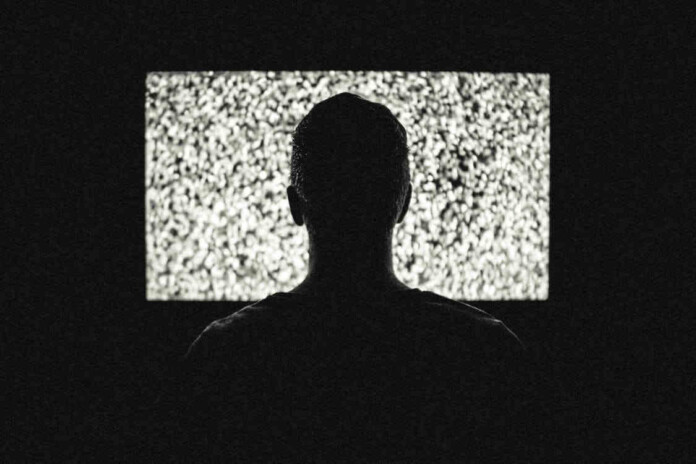 The best cable TV alternatives enable you to watch television without paying exorbitant satellite or cable subscription fees. For decades, cable TV has the only option for households that sought to watch quality shows targeting specialized audiences. But as technology races on, more options are becoming available to television viewers. Today, you don’t have to let cable TV packages put a dent in your budget and financial goals. In fact, you can do away with cable TV but still, enjoy the great shows you get from them. You simply need to pick the best alternative to cable TV based on your needs. Wondering how to go about this? Well, here are some cost-effective alternatives to cable TV

Sling TV is a streaming service that provides live TV online. It is an intelligently packaged service with over 150 channels. Realistically, you probably watch fewer than 20 channels; and of course, everyone’s 20 channels are different. Sling TV understands this well. So how about being able to customize your own channel lineup by choosing your favorite Extras? Sling TV makes that possible for you by introducing "A LA CARTE TV".

And if you must have it all, they’ve ensured it gets extra affordable. Whether it is sports, comedy, kids, news, lifestyle or movie contents you want, Sling TV will satisfy your needs. What’s more? There are no long-term contracts, no hidden fees, no cable BS and you can change or cancel your service(s), add or remove Extras with just a few simple clicks online.

If you’re wondering why you should go for Sling TV, consider its freedom to customize viewing choices which enables you to save money that would go to traditional cable TV packages. Essentially, Sling TV packages put you in charge of the channels you pay for.

DIRECTV NOW is one other great option if you would rather not go for cable TV. Offered by AT&T, it provides live TV online from the networks you typically get with your cable bundle.

Want to spice up your experience? DIRECTV NOW offers Cinemax and HBO at a monthly fee of $5 each. They just added Showtime to the lot and you can get it at $8 per month. Also, available for $8 monthly is Starz. Considering that HBO Now runs at $14.99 monthly, this is the cheapest way to watch your favorite shows without incurring the hefty cable TV expenses. And with no annual contracts, no installation headaches, no extra fees and the possibility to cancel your subscription anytime, there is nothing should stop you from trying this great option. I wouldn’t think a second time if I had to make a choice. 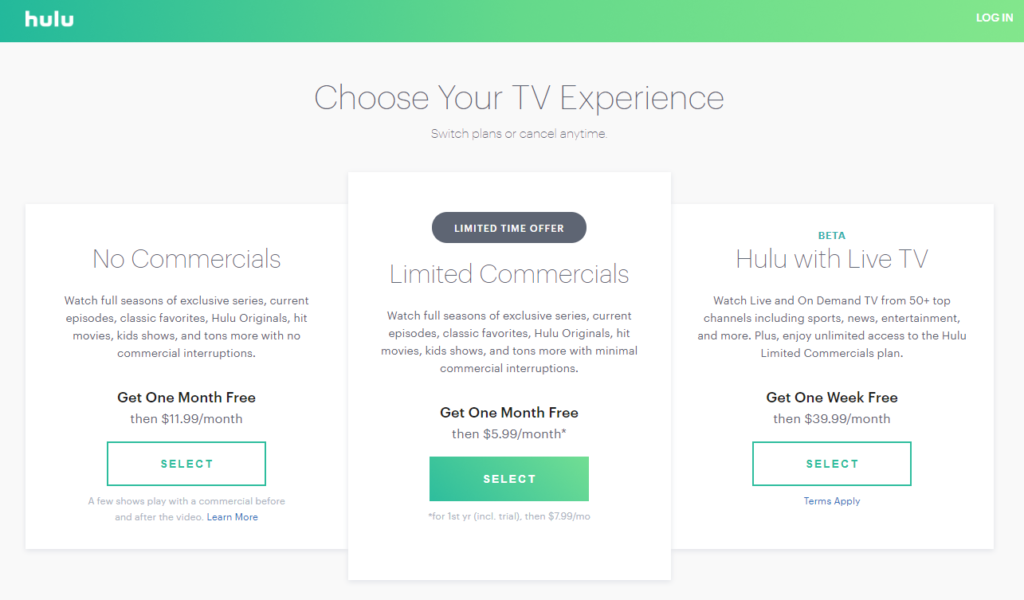 Hulu provides TV shows that air on NBC, ABC, and Fox. However, current shows’ seasons are aired one day after showing on their official broadcast networks. Hulu and Netflix have similar streaming subscriptions, but Hulu seems to have cool features that are not available on Netflix.

With the Hulu Basic Plan, you can stream on your favorite device, get unlimited access to the Hulu streaming library with limited or no commercials, enjoy full seasons of exclusive series, hit movies, Hulu Originals, kids shows, and much more. Like most other services, Hulu allows you to switch plans or cancel anytime. If you want to test the service before making up your mind, the basic version offers a 30 day trial period.

Want a bigger and better experience, try Hulu with Live TV BETA. Available for $39.99 per month you receive unlimited access to the Hulu streaming library (Limited Commercials plan) with full seasons of exclusive series, hit movies, Hulu Originals, kids shows, and more. But it doesn’t end there… Hulu with Live TV BETA enables you to stream 50+ top Live and On Demand TV channels including sports, news, and entertainment. Both packages give you the option to purchase Cinemax, Showtime, and HBO streaming at an additional fee.

Netflix is probably the most popular cable TV alternative you will find. It provides loads of quality content at relatively low prices. Currently, Netflix offers more than 10,000 TV shows and movies some of them very popular (like Orange is the New Black and House of Cards). Its original TV series is a major force of attraction to many viewers.

Netflix provides three packages as follows; Basic, available at $7.99 per month, Standard which costs $10.99 per month and Premium priced at $13.99 per month. They all are free for the first month, and they all provide unlimited movies and TV shows. The Basic plan will not provide HD images though, and cannot be watched simultaneously on another screen. The Standard plan limits your viewing to two screens simultaneously, while the Premium version permits up to four screens and on Ultra HD.

While these packages seem expensive, they are worth going for. They do beat popular cable TV packages in major cities. Try PlayStation Vue and you will see for yourself that it is worth keeping.

Amazon Prime Video allows you to watch TV shows and movies and pay a reasonable fee annually, after a free 30-day trial. It also gives you the option to subscribe to over 100 premium channels including regular television channels, Showtime, Starz, and HBO.

You want to enjoy movies and TV shows including Amazon Originals The Grand Tour, Sneaky Pete, and The Man in the High Castle? Amazon Prime Video is what you need. What’s more? You get free, unlimited 1-day shipping on 2 million Amazon products when you subscribe to the service. There’s more to that actually… You have the possibility of watching video offline on the Prime Video app. All you need to do is download the titles to your device. You have the possibility to enjoy the service on 3 different devices at the same time.

Do you still have doubts about whether Amazon is the best service for you? Its X-Ray for Movies & TV should help clear your doubts. With that, you can identify actors and songs, explore actor bios, view trivia, and more. If you want to enjoy 1-day shipping on 2 million products and 2-3 day shipping on millions more, unlimited free photo storage on Amazon Drive, ad-free streaming on Twitch, and priority access to Flash Deals 30 minutes before they start, Amazon Prime Video is what you should go for. 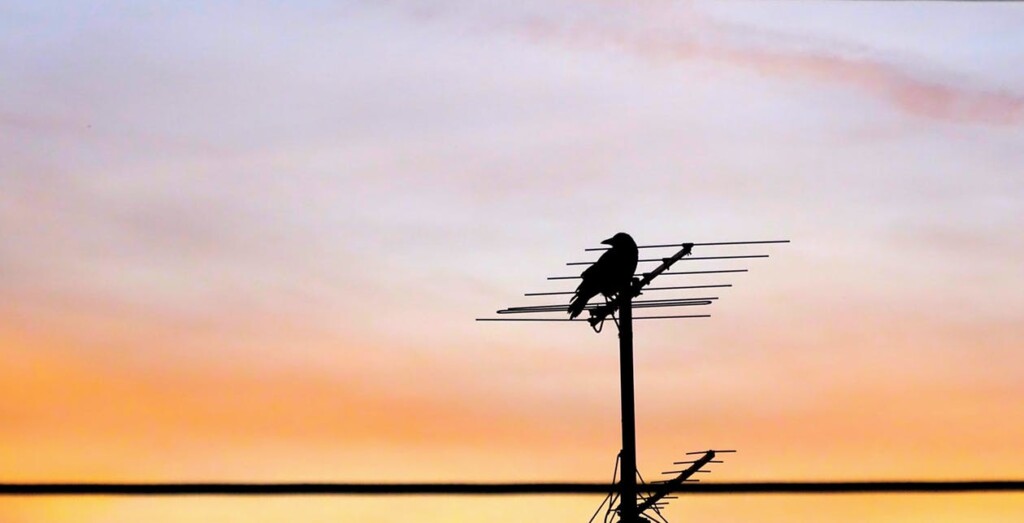 The HDTV antenna enables you to watch free broadcast TV available in your local area without any cable package. You simply need to hook up your home with an HD antenna and you are good to go. Nevertheless, the availability of over-the-air broadcast TV changes with your location. Generally, you can access networks like CBS, NBC, Fox, and ABC among others using an HDTV antenna.

These antennas are different and function differently. It is therefore important to read about them first and perhaps, consider reviews and ratings of the different antennas before making a decision on which to buy.

An HDTV antenna may not give you all the channels accessible with a monthly cable TV subscription, but it will increase the channels that you watch on your local television. A great option with very little cost.

Many people know YouTube for hosting thousands of videos. However, it is also a great place to watch educative and entertaining videos. In fact, YouTube is currently the most popular online platform for streaming videos. But that’s not all… YouTube provides live TV.

YouTube TV streams popular cable TV channels live including FOX, CBS, NBC, and ABC. It also provides cloud-based DVR. That means you can save your favorite shows and watch them later. A major downside of the service is that it is only available in Los Angeles, New York, Chicago, San Francisco Bay Area, and Philadelphia.

You can stream 9,000+ Episodes, Live TV and a lot more. Yes, it’s possible with CBS All Access. This is particularly great if you are a CBS fan. To stream the local live broadcast and enjoy sports, special events and other shows you love, you just need to sign in. Subscribers also get access to CBSN, the 24/7 live-streaming news channel, featuring award-winning coverage from CBS News.

With CBS All Access, your shows are always ready to go! Watch new episodes the next day just by streaming on your device of choice. The CBS All Access app makes it easy for cord cutters to still enjoy their favorite CBS programs whenever and wherever!

If you think you need to try it a little before buying, CBS All Access comes with a one-month free trial.

CBS All Access boasts of some of the best original and exclusive content you can find in the world. A perfect example is Star Trek Discovery, a new show, premiered on CBS in September 2017. With access to more than 9,000 TV shows’ episodes, CBS All Access is just the best. You really should go for it.

HBO Now is a streaming service that allows you access to HBO programming ranging from TV shows to blockbuster movies… all at a considerably affordable monthly price.

This is a streaming service that permits you to subscribe to stand-alone services, but you can also add them to your Hulu, Amazon Prime, Netflix, or Sling TV account for an extra fee. Starz is a great alternative you wouldn’t want to miss in your options of great cable TV alternatives.

There are many more juicy alternatives to cable TV. Some of them give you a free trial period just to enable you to make a wise decision. Go for these, and you will realize that you really don’t have to spend a lot of money to get your favorite TV viewing preferences.