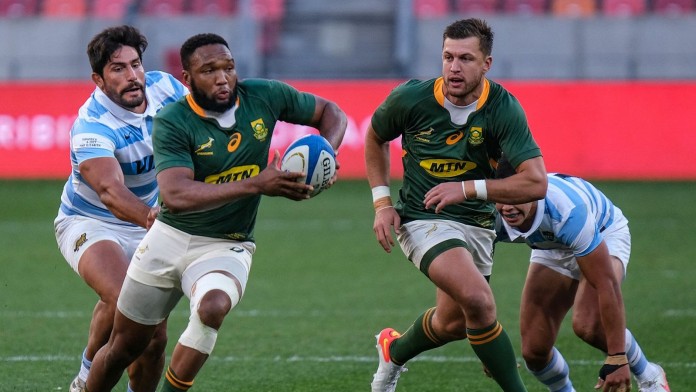 It is crunch time in the 2022 Rugby Championship, and we are very close to discovering which team will come out on top in this prestigious annual international rugby union competition. Argentina and South Africa are set to battle at the Libertadores de América Stadium on Saturday, and we are looking forward to what should be a fascinating slugfest.

This weekend, we are set for an enthralling match-up between Argentina and South Africa. The two teams have competed in memorable matches over the years, and this one is expected to live up to the billing. South Africa’s line-up remains unchanged from their last game, but they will be desperate to build on the momentum generated by their impressive win over Australia in their last game. The Springboks are the defending world champions, having won the Rugby World Cup in 2019. Argentina have also won two and lost two of their games so far. They were handed a hammering by New Zealand last time, but playing at home in Buenos Aires could boost their chances of winning.

The Rugby Championship round five clash between South Africa and Argentina will take place on Saturday, September 17, 2022. The game will start at 15:10 ET, and we recommend that you do not miss out on any action. Here you will find all the information you need on where and how to watch Argentina v South Africa live from anywhere in the world without the need for cable. Also, check out our 2022 Rugby Championship guide for more information on how to follow all the action live.

The 2022 Rugby Championship is airing live in several countries worldwide, and Argentina v South Africa will be no different. But if you are traveling abroad during the game or living in a region where no platforms have broadcasting rights, you may not be able to tune in live. Worry not, though, because you can use a VPN to watch the Rugby Championship: Argentina v South Africa 2022 live stream online. A VPN will give you a virtual location, allowing you to follow the live action on the go.

We recommend using ExpressVPN, as it is one of the most reliable, affordable, and secure VPNs in the world. It is used by millions of people daily and works with most streaming services, and you can choose from thousands of virtual locations. Moreover, there are tons of amazing offers for you, such as the no-questions-asked money-back guarantee, so go ahead and try ExpressVPN for 30 days RISK-FREE.

If you want to subscribe to ExpressVPN (49% Discount + 3 Months FREE), simply head over to its website, fill out the important information, select your plan, pay the subscription fee and download the app on your device of choice. Then, select a VPN server from your home country and turn on the streaming service that has broadcasting rights for the game. You will then discover that all the geo-restrictions are gone, making it possible for you to watch the Rugby Championship clash between Argentina and South Africa seamlessly on the go.

Rugby is a popular sport in the United Kingdom, and fans can watch the contest between Argentina and South Africa on Sky Sports Main Event and Arena. A live stream of the game will also be available on the broadcaster's app and website. You can purchase a subscription to Sky Sports for £44 per month for your first 18 months if you have not subscribed to the platform before. The game is scheduled to get underway at 18:10 BST on Saturday, September 17.

Want to watch the Rugby Championship on the go while traveling abroad? You will need a working VPN to bypass the geo-restrictions. Simply follow the instructions above, and you can watch Argentina v South Africa seamlessly, even if you are not in the UK.

Rugby Championship 2022: How to Watch Argentina v South Africa in the US Without Cable

FloRugby has the broadcasting rights for the 2022 Rugby Championships, and fans can watch Argentina v South Africa live on the go on this platform. You can purchase a subscription for $29.99 per month or $150 per year to get access to live rugby games worldwide. This platform has the rights to broadcast many rugby matches and tournaments all year long, making it a must-have for all fans of the sport. If you want to tune in to the game between Argentina and South Africa, set your reminders for 15:10 ET.

If you find yourself traveling away from the United States but still want to watch the Rugby Championship live, you can do so with the help of a fast VPN. By using a VPN, you will be able to unblock the geo-blocked live stream. That will make it possible for you to watch Argentina v South Africa from anywhere in the world.

Rugby fans in Canada can watch the clash between Argentina and South Africa live on TSN. The game will air live on its cable TV channel, but streaming options are also available for those looking to cut cords and watch the action on the go. To access this game and the other live sporting action on TSN, you will need to pay a subscription fee of $19.99 per month or $199.90 per year. The game will start at 15:10 ET / 14:10 CT / 12:10 PT for fans in Canada.

A secure VPN will help you watch Argentina v South Africa live if you are traveling away from Canada. All you have to do is follow the instructions above, select a Canada-based server, and you will be able to bypass the geo-restrictions to watch the Rugby Championship seamlessly.

Rugby fans in Australia are still reeling from their country's defeat to New Zealand, but those looking to watch Argentina v South Africa can do so by tuning in to Stan Sports or the free-to-air Nine Network. A subscription to Stan Sports costs AU $19 per month, and new subscribers are also entitled to a free 7-day trial. The game will start at 05:10 AEST on Sunday, September 18, for fans in Australia, so you will need to set your alarms beforehand to ensure you do not miss the game.

Traveling abroad during the game? Make sure to use a reliable VPN to watch Argentina v South Africa live. A VPN will give you a virtual Australia-based location, making it possible to watch the Rugby Championship on the above-mentioned platforms.

Fans in South Africa can watch the Springboks battle Argentina live on SuperSport. You will need to subscribe to the DStv Premium for R699 per month for 3 months (offer available for a limited time). Alternatively, you can watch the game on-demand by subscribing to Showmax Pro for R449 per month. The game will start at 19:10 for fans living in South Africa.

If you use a trustworthy VPN, you will be able to watch the Rugby Championship live on the go. A VPN will make it seem to your browser that you are accessing the live stream from South Africa, even if you are traveling abroad during the Argentina v South Africa game.

Rugby fans living in Argentina can get live access to the game against South Africa and other Rugby Championship matches by purchasing a subscription to ESPN via Star+. You will find that a monthly subscription starts from ARS 880, and the game will get underway at 16:10 local time.

This platform will be geo-blocked in other countries, but a good VPN will help you bypass those restrictions quite easily. Simply select an Argentina-based server to activate the VPN, and you will be able to watch the live stream of Argentina v South Africa.