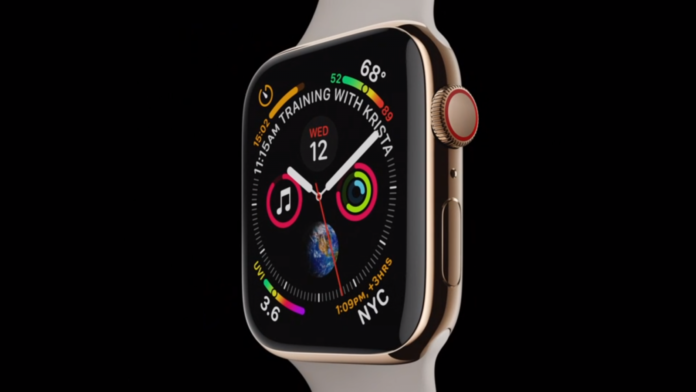 It’s finally here. After months of leaks and rumors, Apple has made the Watch Series 4 official at it’s September 12 event currently underway at the Steve Jobs Theatre at Cupertino. Apple COO Jeff Williams took to the stage to unveil the next iteration to the world’s most popular smartwatch.

The new Apple Watch Series 4 is completely reengineered and now sports a 30% larger display, which affords more complications (up to 8) on the display. The Watch Series 4 will be available in 40mm and 44mm sizes. The crown now supports haptic feedback and is sensitive to touch. The back of the Watch is made of ceramic and sapphire glass for improved cellular connectivity. Apple is introducing an improved accelerometer and gyroscope in the new Watch Series 4. The speaker is now 50% louder and is optimized for Siri and Walkie-Talkie modes.

The Watch Series 4 is powered by the new Apple S4 chip, a dual-core 64-bit processor with emphasis on long battery life even with GPS on. There are a many new watch faces that Apple showed off during the keynote including Breathe, Vapor, Liquid Metal, Fire, and Water that interact well with the edges of the watch.

Perhaps the defining feature of the Apple Watch Series 4 is its new ECG capability. Electrodes are built into the digital crown and together with the heart rate sensor in the back, it can record an ECG within just 30 seconds. The data can be collated in a PDF, which can then be shared with the physician for a diagnosis. The Watch Series 4 can analyze heart rhythm continuously and send a notification if an irregular beat is detected. The Watch can also detect fall from a surface and can alert the user or send an SOS in case of an emergency.

What do you think about the new Apple Watch Series 4? Let us know in the comments below. Also, to get instant tech updates, follow TechNadu’s Facebook page, and Twitter handle.