10 Anime That Will Make You Cry Like a Baby 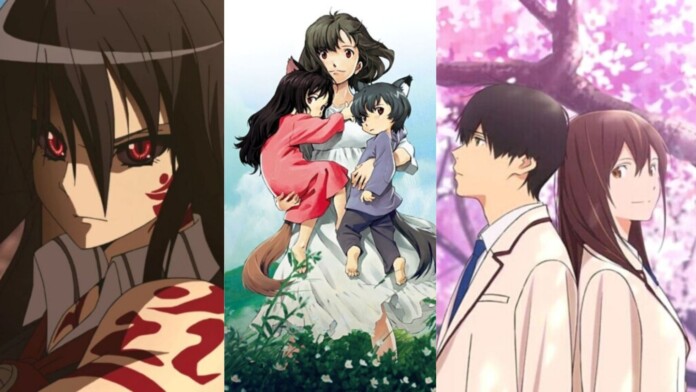 Just like any medium, anime has its share of both comedy and tragedy. We've already covered the comedy side of things in a previous article, but now it's time for a list of those anime that make you cry. Whether it's because of tragedy, romance, or happiness each one of these titles has the ability to extract a few tears from you. So grab your box of tissues and get ready to let it all out.

Akame Ga Kill is set in a fantasy kingdom where those who rule have become corrupt, so the seeds of rebellion are starting to bear fruit. Akame is a former royal assassin who has joined a group of elite assassins who work for the rebellion. Every member of Night Raid, as it's known, has their own reason for fighting against the corrupt crown, but they all know every mission could be their last.

Akame Ga Kill is an excellent action anime with great battles and interesting characters. We especially like how even the "bad" guys are easy to sympathize with and even like. In fact, the show is filled with likable characters who are then suddenly and unexpectedly killed off. Akame Ga Kill really takes the "Game of Thrones"-style character murder formula to the next level. No one is safe, and every battle carries the real tension that the character you really like is going to die gruesomely. It's great fun, but be prepared to feel like someone is cutting onions in the room when your fave's time is up!

Re:Zero is an isekai (another world) anime with a pretty big twist. Instead of the protagonist being granted incredible powers and having a good time in their new fantasy home, he only has the power to return to an earlier time after fully experiencing death first.

Natsuki Subaru is thrown into a brutal fantasy world without any clear idea of why and has to learn the secret behind his arrival and the world-shaking events that follow by painfully dying over and over again. As you might imagine, dying over and over again isn't great for his psychological state, but he also has to witness his few friends and loved ones die horribly over and over again. Often his short-term goal is simply to prevent their deaths against enemies who are seemingly invincible. This is an anime built on violence, pain, tragedy, and madness. It's also incredibly good, so add it to your list of shows to watch!

This Netflix exclusive show is an adaptation of Go Nagai's Devilman manga and a modern attempt at adapting the source material again, following the excellent 1987 and 1990 OVA releases.

Crybaby tells the story of Akira Fudo, who becomes fused with a powerful demon through various twists and turns. He uses this power to fight other demons and protect those he loves. However, even with the powers of an archdemon, it's a losing battle against the forces of darkness. Not to mention constant tragedy and betrayal on the human side of his life.

Devilman Crybaby is beautiful, nihilistic, and intensely sad. It's also great at subverting your expectations, which adds to the sense of shock and loss as the plot draws to its conclusion. Keep the tissues close for this one, folks!

Being a single mom is hard enough, but when you're the widowed mother of half-werewolf children. Hana's beloved husband is tragically taken from her, and trying to wrangle two wild kids looking for their path in life is no easy task. Add tangles with social workers, schools, and general difficulties life throws at all of us, and it would be a miracle if the children reach adulthood.

Wolf children are filled with wistfulness, loss, tragedy, triumph, and plenty of real-life struggle. You'll be shedding tears of sadness and joy, but it's an unmissable film either way.

6. Your Lie in April

Imagine that a tragedy in your life is such a shock that you lose the ability to do the one thing you're the best at. That's what happens to Kosei Arima, a piano genius who loses the ability to hear his piano following the shock death of his mother.

Years later, a violinist named Kaori helps Kosei return to his music and sparks feelings of love between them, but tragedy is ready for an encore in Kosei's life. Be prepared - this one is going to hurt.

5. I Want to Eat Your Pancreas

A girl with a terminal pancreatic disease is set on living out her time on Earth as a normal student. A boy discovers her secret when he finds her diary in a hospital waiting room, and they get closer as time goes by. It doesn't have a happy ending. It's a fantastic film.

A boy bullies a deaf girl who has recently transferred to his school. When he's outed as her bully, his classmates turn against him, and the girl transfers to another school. The boy, Shoya, is ostracized for the rest of his time at school as a bully.

Now a depressed loner, Shoya is suicidal. However, he wants to make up for the girl he bullied and tracks her down to apologize. After this, they become friends, but Shoya still has to reckon with his past and how it hurt various people in his life. Not least of which Shoya himself. A Silent Voice is beautiful and haunting, but it deals with heavy issues such as depression, suicide, and guilt. It does end on a high note, but the road to the end is paved with sadness.

Code Geass is one of my all-time favorite shows and is one of those mecha anime that do a lot with the genre. Set in an alternate timeline, Japan has been conquered by Britannia. Lelouch Lamperouge is an exiled prince from that dominant kingdom, living under an assumed name with his sister.

Lelouch decides he wants to get back at the people responsible for the death of his mother and his exile, but taking charge of the Japanese rebellion against the empire. To make a success of it, he has to be utterly ruthless and make full use of every advantage. That includes a "geass" - a power he receives from a mysterious witch that lets him order anyone to do anything once. What price is worth getting your revenge? What price is worth claiming the crown? Lelouche is about to find out.

Evangelion is, without a doubt, my own personal number one show, but that doesn't mean you're in for an easy ride. What starts as a seemingly normal teen mecha adventure anime quickly degenerates into psychological horror or epic proportions.

The protagonist, Shinji, starts as a fragile boy already suffering from loss and abandonment issues, but being pulled into being a mecha pilot who has to fight mysterious alien "angels" is enough for the wheels to really come off. Not that Shinji is alone in his need for serious therapy, everyone in Evangelion has a screw loose, a god complex, or might actually be some sort of godlike being. By the end, you'll have a loosened grip on reality yourself, but the one thing that isn't in doubt is the endless tragedy threaded throughout this magnum opus.

1. Grave of the Fireflies

The nuclear bombing of Japan gets the most attention as a humanitarian tragedy during World War II. Still, those bombs' destructiveness pales compared to the horrific firebombings that destroyed the paper and wood cities most people called home.

Grave of the Fireflies follows the struggle of two young children to survive after their home is destroyed and their mother is killed in a firebombing. They look for help from anyone who's willing to listen, but in these desperate times, most people are just trying to survive themselves. The story has a bittersweet (with an emphasis on bitter) conclusion but manages to be beautiful all the same. I think this film was made by Studio Ghibli's Isao Takahata, but the credits are very hard to read through tears.