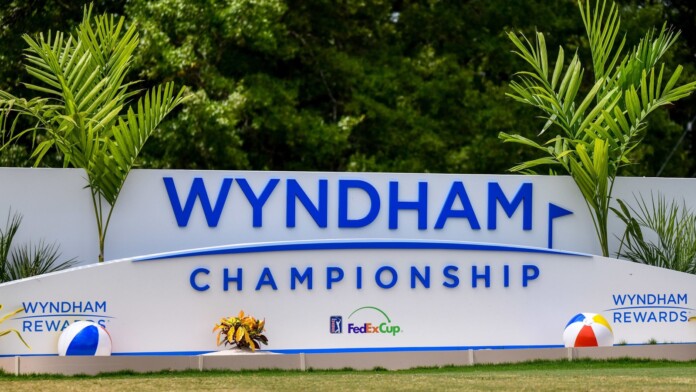 This professional golf tournament has been played annually since 1948, and it currently has a purse of $6.4 million, with the winner taking home over $1.1 million.

Last year the event was won by JT Poston, and it’s going to be rather interesting to see if he manages to win the event again. You can click the link below and check out the full list of players that are expected to join the Wyndham Championship.

When and Where to Watch the Wyndham Championship?

This golf tournament that takes place in North Carolina at the Greensboro golf course he’s going to start on August 13th and last through August 16th. The broadcast for the event is split between Golf Channel and CBS during the weekend. You can check below to see which time you need to tune in to watch the various rounds of the Wyndham Championship.

How Can I Live Stream the Wyndham Championship?

Nowadays, there are loads of ways that you can watch TV online, and fuboTV is one of our go-to platforms. This one features close to a hundred networks in the main bundle and loads more in the various extra packs you can add to your account.

fuboTV is one of the many live TV platforms that can help you enjoy all these events that you like, no matter where you are, as long as you have an internet connection and a mobile device.

As mentioned, besides the main bundle, you can also get any of the available extra channel packs and add them to your account. There are also plenty of premium networks that you should definitely look into.

fuboTV works on loads of devices, so if you’re going to watch anything, you need to download the apps first. You can find them for iOS and Android smartphones and tablets, Apple TV, Android TV, Fire TV, Chromecast, Roku, and more.

CBS is a channel that broadcasts in select markets only, so if you live in an area with no coverage, you can definitely use a VPN and connect to a server from a different city to get those specific channels, including CBS. You can click here to find out more about how you can do this.

Other Ways to Watch The Wyndham Championship Online

The Wyndham Championship is fairly easy to watch online, and you will simply need to use one of the live TV services that are currently available. Let’s see which ones make it on the list.

Hulu – Hulu is another option that you should definitely look into, as it features both CBS and the Golf Channel. There are a couple of extra channel packs that you can add to your account, as well as several premium networks. With Hulu, when you subscribe to the Live TV service, you also get to enjoy the On-Demand library, which means you have two platforms.

There are also add-ons you can add to your account in order to expand the cloud DVR storage space capacity or the number of simultaneous streams allowed on your account. Start your free trial on Hulu now!

Sling TV – Sling TV is another option, especially if you like to customize your subscription. There are three bundles available, namely Orange, Blue, and Orange + Blue. CBS is not part of the offering on Sling TV, but you will find that channel is available in the Sports Extra channel pack. You also have to be careful when you make your choice in bundles, because Orange subscribers can only watch content on one device at a time, while Blue subscribers get three simultaneous streams, and Orange + Blue subscribers get four of them.

There are many other extra channel packs and premium networks you can add here besides the Sports Extra, so take a look at those as well. Get $10 off (first month only) on Sling TV Now!

CBS All Access – On CBS All Access, you will get to enjoy a live stream of CBS rather easily, so you will be able to watch the weekend round of the Wyndham Championship. There are two subscription options here, namely Limited Commercials and Commercial-Free, and their price varies a bit.

However, they both get the same content to stream and the same CBS live stream. Start your free trial on CBS All Access now!

How Can I Watch the Wyndham Championship When Traveling Outside of the United States?

A VPN can change your IP address in just a few seconds and allow you to watch all the content you are prohibited from due to various blockades, such as the ones affecting the live TV and streaming platforms. Our recommendation is to use ExpressVPN because it’s easily one of the best tools on the market.

You simply have to subscribe to ExpressVPN (49% OFF), sort out the apps on your account, and find the server in the United States to connect to. When the connection is established, you can move forward and load fuboTV so you can start watching the Wyndham Championship online. There is also a 30-days money-back guarantee here, so keep that in mind.

Can I Watch Wyndham Championship With a TV Antenna?

The answer to this question is ‘partially yes’ because it’s only going to be the rounds that are taking place during the weekend and broadcast by CBS. CBS is one of the few channels that continue to broadcast over-the-air, so you will get to enjoy the golf tournament with a TV antenna. Antennas are rather cheap, and they enable people to watch channels locally for free.

Before you buy anything, however, you should look into a site like NoCable so that you can find out exactly how far the broadcast stations are from your home and whether or not CBS is on that list. The information should also come in handy when trying to find out exactly what range your device should cover.

Make sure you also check the devices we listed above just in case any of them have the features you need at home.