Windscribe Free vs. Paid (2021) – What Do You Get for Free? Is It Worth Paying Instead? 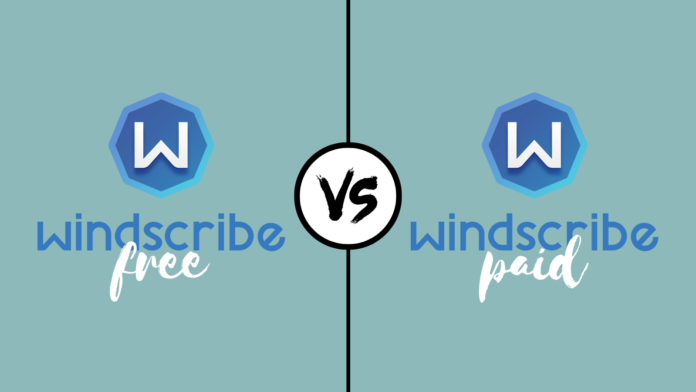 When it comes to free-of-charge VPNs, you’ll find Windscribe mention quite often on the Web. That’s because this VPN has a very compelling offer and a capable set of features. However, since it offers both free and paid plans, you probably wonder about the differences between the two. So, which one should you pick? Well, find out by reading our hands-in Windscribe free vs. paid comparison!

We'll help you decide if you're better off using Windscribe's free version or if you should pay for a subscription – by comparing them directly. So, let's jump right in, shall we?

First, let’s check what devices are covered by Windscribe’s free and paid plans, as well as how many connections does each of those bring.

SUMMARY: If you're worried that Windscribe will limit its device support for free accounts, know that both free and paying customers get access to a dozen apps this VPN offers without any restrictions.

In this segment, we'll show you a list of Windscribe's privacy-protecting features, letting you compare that to what free accounts bring. Keep on reading.

Next, let’s check the size of Windscribe’s server network. We’ll see whether this VPN restricts access to its servers for those who have a free account.

SUMMARY: While free accounts get access to 10 countries and a limited number of servers, Windscribe’s paid subscriptions expand that by 6 times – giving you access to more than 60 countries and 110 server locations.

In this segment of our Windscribe free vs. paid comparison, we’ll check whether this VPN imposes any data or speed limitations.

SUMMARY: Windscribe gives a limited monthly bandwidth to its free users. Even though you can increase that limit via various promotions, nothing can replace paying for the VPN – which lifts all of the previously mentioned restrictions.

Want to unblock websites and download torrents privately but without paying for a VPN? Let’s see if Windscribe could answer your needs.

SUMMARY: Windscribe's free and paid plans can be used to stream media and download torrents – but they aren't the best options you have right now. On top of that, don't forget that Windscribe's free plans come with data and speed limitations.

When it comes to resolving VPN-related issues, you’ll want to have access to experts trained to be quick and efficient. So, here’s what to know about Windscribe’s customer support.

SUMMARY: For the most part, Windscribe should work without any issues. However, once you encounter a problem (no matter if you pay for the VPN or use it for free), be prepared to go through a lengthy troubleshooting procedure.

The final segment of our Windscribe free vs. paid comparison will tell you about the VPN’s pricing plans. Begin by checking the table found just below.

SUMMARY: You’ll be happy to know that Windscribe’s free accounts come without any tricks. You won’t have to provide any payment info – which means you won’t be charged. However, if you decide to pay, know that Windscribe is one of the most flexible VPNs, as it allows you to custom-build a plan.

In the End – Should You Pick Windscribe’s Free Plan or Premium Subscription?

It’s true; we’ve provided you with tons of information in this comparison. So, let’s settle on the most important highlights, which we’ve displayed via the following table.

We have to say that Windscribe’s free plan provides a compelling offer. Unless you don’t mind having a monthly data allowance or somewhat limited performance, you can use Windscribe to protect your privacy on-demand. The same applies to media streaming and torrenting, both of which are available in a limited form.

However, if you want a reliable VPN that keeps you safe online without restrictions, feel free to become a paying Winscribe customer. Still, even though this is an inexpensive VPN, it’s not the most comprehensive one you’ll find on today’s market.

So, if you’d like to continue your search, we’ll offer you several handy resources. First, check out how to pick a VPN service, and then check the best VPNs available right now. And lastly, if you want the best for your online privacy, check these no-logs VPN services.

That would be all for our Windscribe free vs. paid comparison. In case you have any questions or doubts, make sure to post your comment just below. And lastly, thanks for reading!