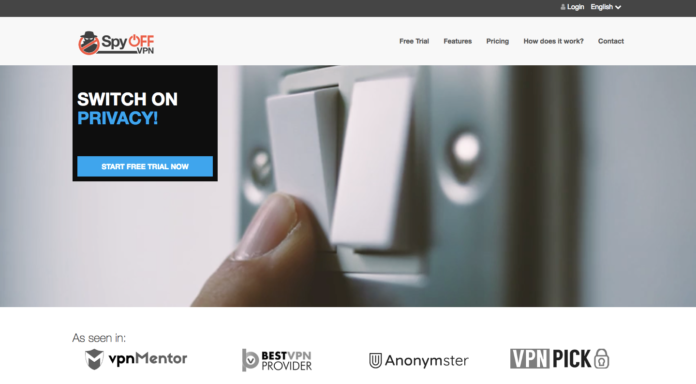 Here's our review of the SpyOFF VPN tool. You might be forgiven for not knowing what VPN stands for, but not for never having used it at least once in your lifetime. With the growing concerns over internet privacy the world over, it's no surprise VPN software are rapidly becoming popular around the world for this most important reason alone: they cloak your IP address allowing you to browse the internet without being tracked and traced online.

SpyOFF is one of the most popular software out there when it comes to IP hiding tools and is a software that does not disappoint from many angles.

The following table presents the most important features of the software for a quick reference:

A common reason people opt for VPN services is too unblock geo-restricted content such as US original Netflix films and series as well as Hulu content. We tested SpyOFF VPN for unblocking geo-restrictions and present the results in the table below. There's no need for unblocking with Kodi of course, but it must be ensured that your system isn't leaking your IP to the ISP.

It must be remembered, however, that the choice of server is critical when it comes to this particular use case. While certain US servers will yield the desired results, some might not work. Run trials with several servers to see which one works best. It is also imperative to consider the fact that a service currently unblocking content might no longer work a day later since Netflix continually blocks new IPs.

It's time to see the major pros and cons of the SpyOFF VPN tool.

With this, we hope you got a basic overview of the SpyOFF VPN tool. Let's now proceed straight to the in-depth review.

The following is a detailed review of the SpyOFF VPN tool, where we conduct multiple tests on the software to help you decide if this indeed is the right fit for your devices. 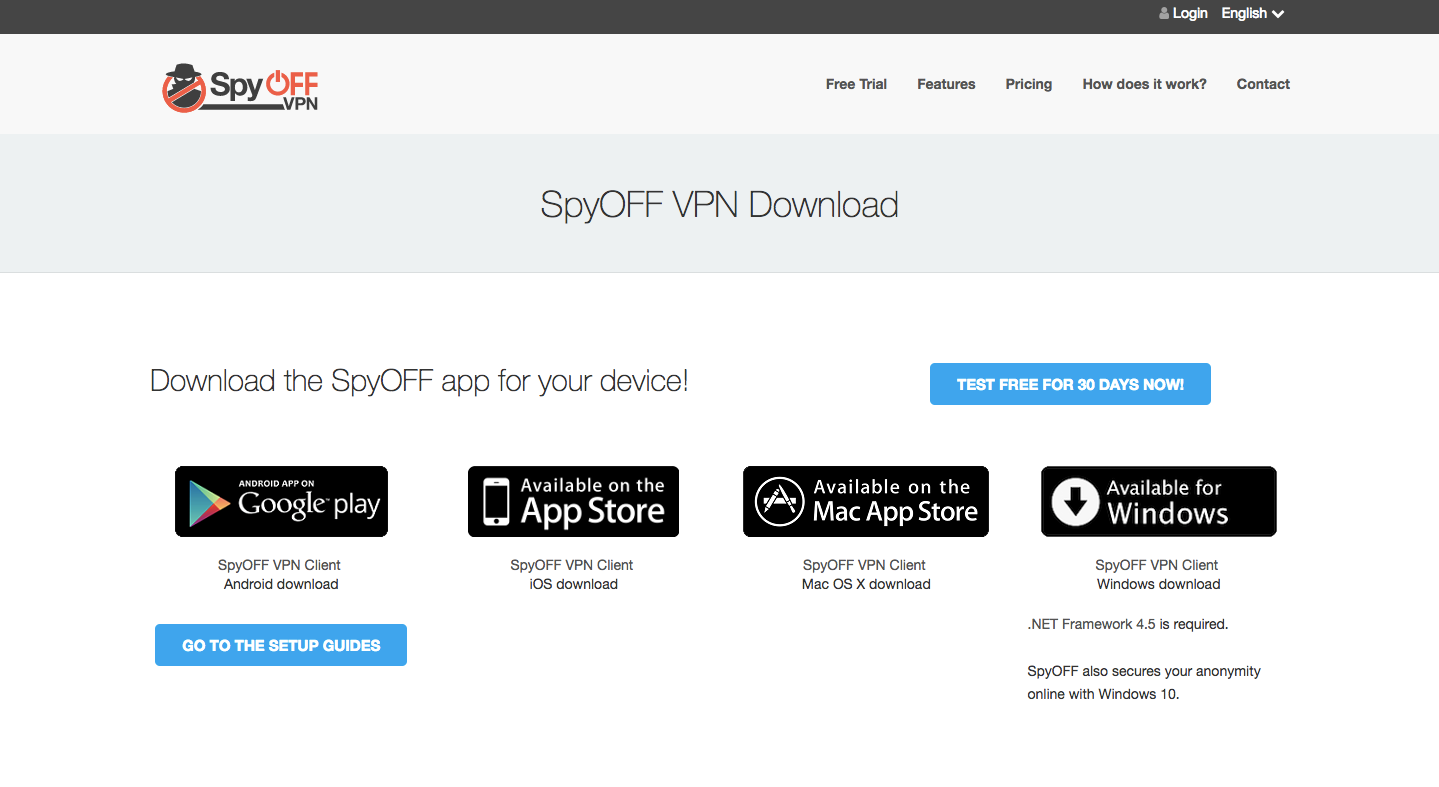 SpyOFF VPN supports a variety of OSs and devices. Our Score: 9/10.

SpyOFF VPN is available for download on a number of different platforms and devices. You can obtain a version for your Mac OS device, iOS device (iPhone/iPad) or your Android/Windows device.

You could connect multiple devices onto the VPN network at the same time, which is a great feature in our opinion. 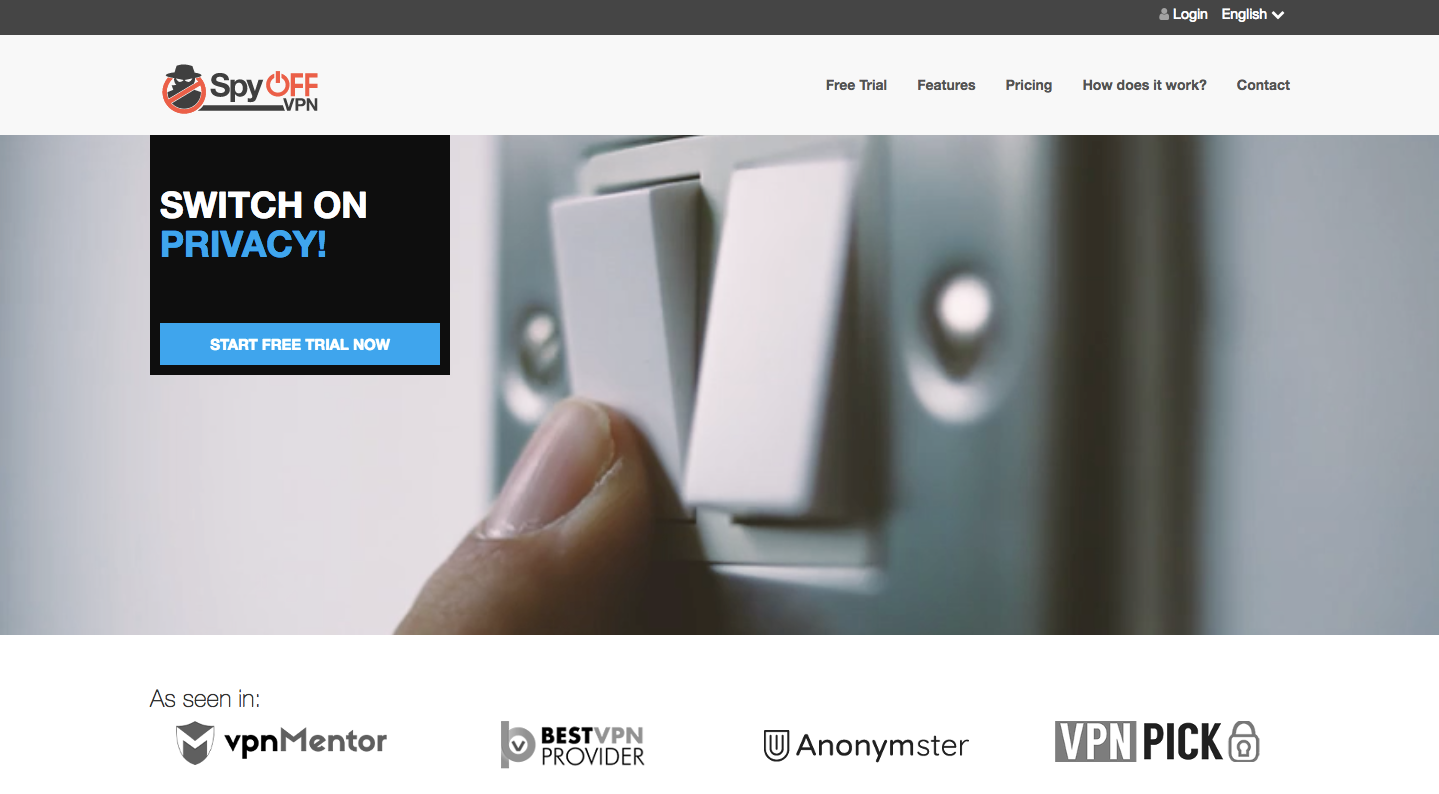 It's easy to install SpyOFF VPN on your favorite device. The process is straightforward and takes a few minutes. Our Score: 10/10.

Proceed to the official website of SpyOFF VPN and next head to the 'Downloads' page. Once the download package is installed, double-click to begin the installation. You'll see the login screen once installation completes. 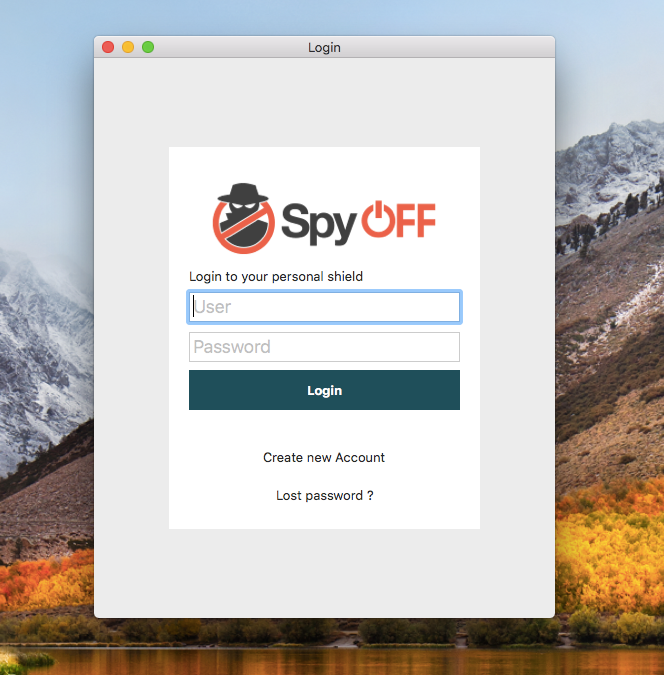 Enter your login credentials if you already own a subscription. If you don't, click on 'Create new Account' button to buy a plan. You can try the software for 30-days without any charge, which is a great feature. 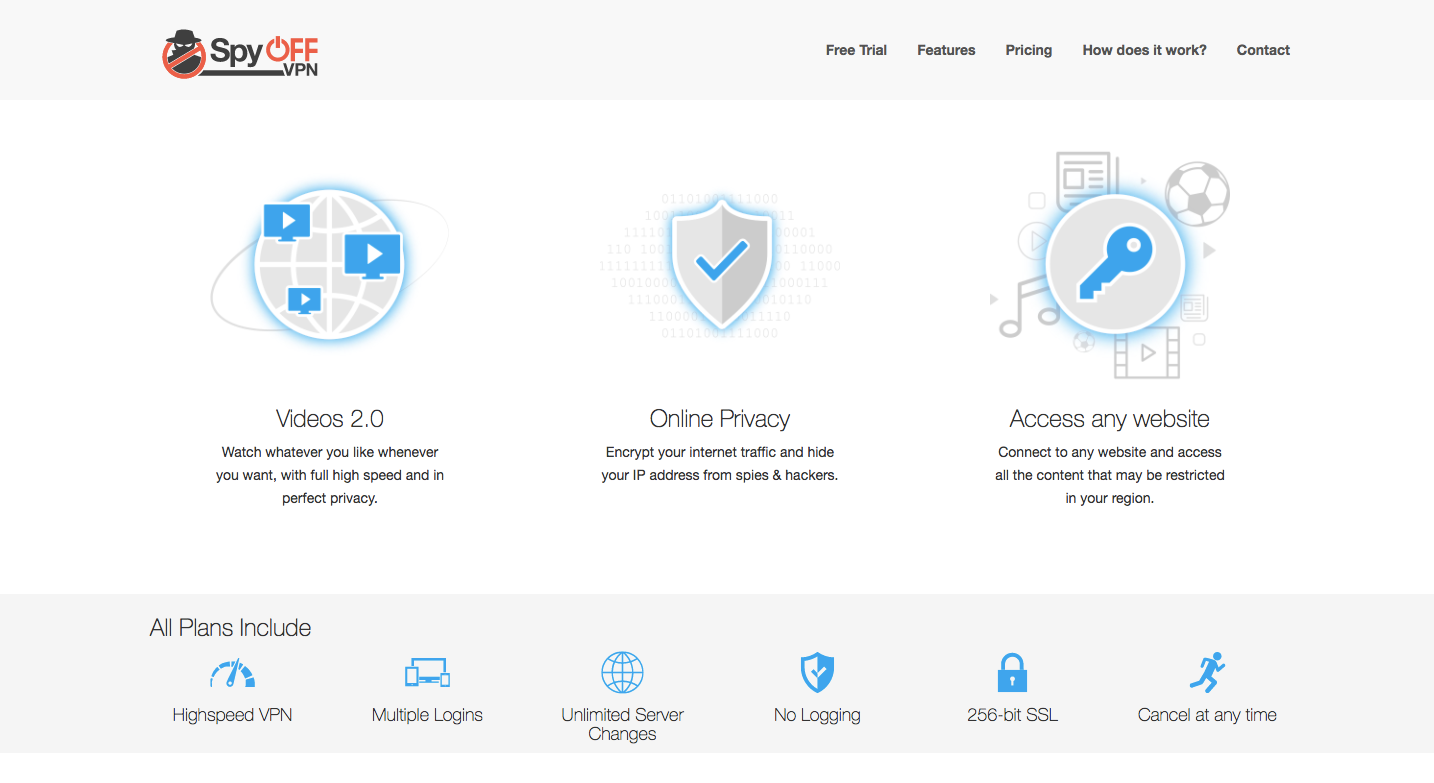 SpyOFF VPN boasts several features including a few advanced tools too. Our Score: 9/10.

The software tool has a number of features that deserve a mention. To start, there's a Network Kill Switch functionality, which will automatically cut the internet connection whenever the VPN functionality is disconnected to prevent accidental leaks. Many a VPN tools lack this important function.

SpyOFF VPN also boasts the ability to allow users to select servers of their choice from a list of countries. There are no specifically designated servers for media streaming, however.

Multiple Logins is another important function, which allows users to connect the VPN network on multiple devices at a time. 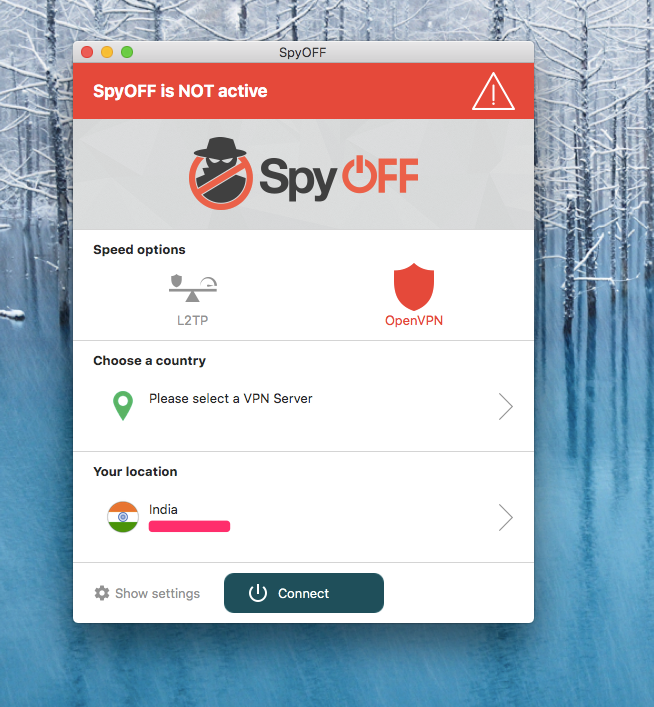 SpyOFF VPN is easy to use. The UI is clutter-free and easy to navigate around. Our Score: 10/10.

When it comes to the User Interface, SpyOFF VPN is extremely easy to use. The design is minimalistic unlike many other VPN tools that overly complicate their design. Beginners will have no trouble finding their way through the interface. 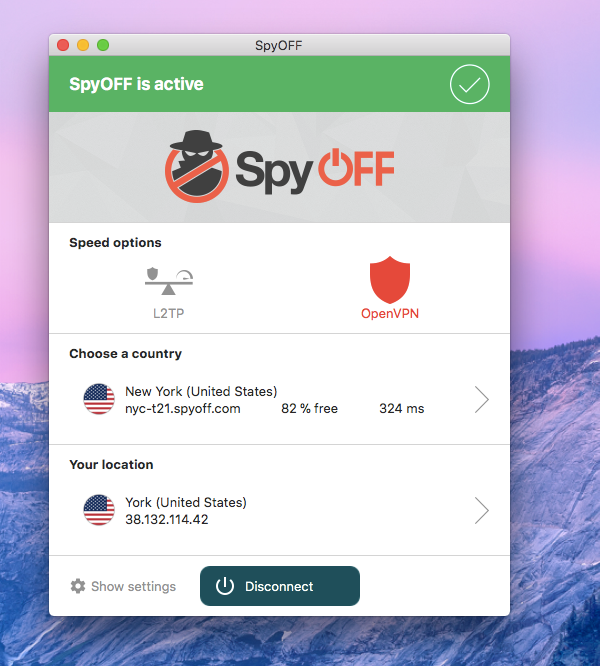 You can choose the server of your choice in the 'Choose a country' option. You will also be able to see your virtual location in the 'Your Location' section, which shows a map overlay. Click the 'Connect' button at the bottom to initiate the connection. 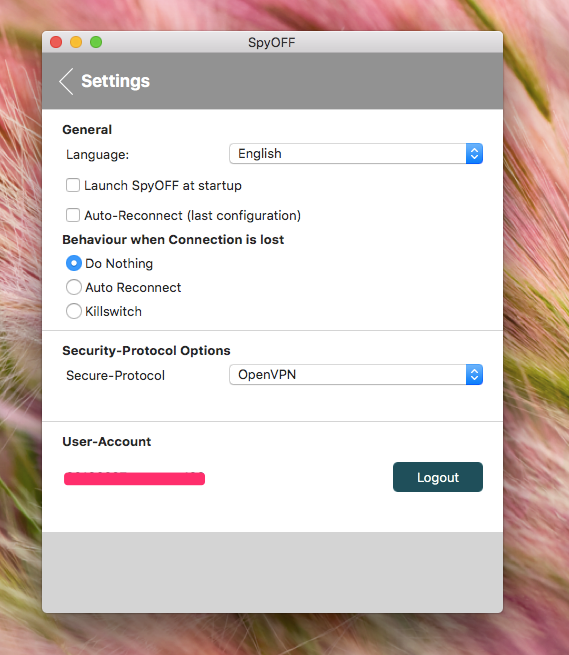 The 'Settings' section is where you will be able to fine-tune controls. The interface language, launch at startup, and auto-reconnect options can all be configured on this screen. An important setting to note is the 'Behavior when Connection is lost' setting where one can either configure the VON to do nothing or turn on the Killswitch. We highly recommend the latter setting, in which case, the VPN tool will cease all network connections the moment VPN functionality is out of service. This prevents any accidental data leaks. 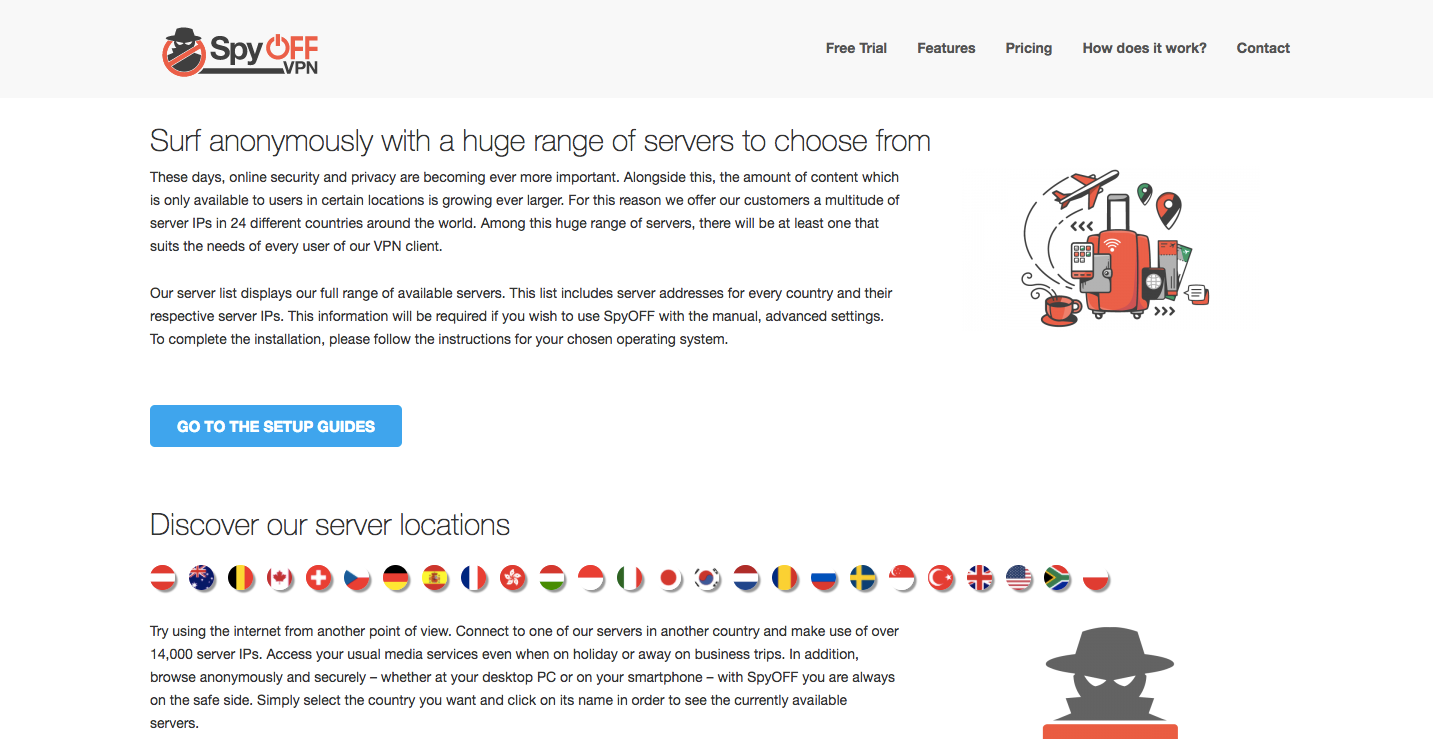 SpyOFF VPN has a number of servers located around the world. Our Score: 8/10.

SpyOFF VPN operates as many as 14,000 different IPs in 24 countries around the world. The network is pretty vast, as is clearly evident.

It must be noted that the server must be carefully chosen when using VPN services, for it not only has an important bearing on the performance but can also play a significant role in deciding whether the service will unlock geo-restricted content or not. 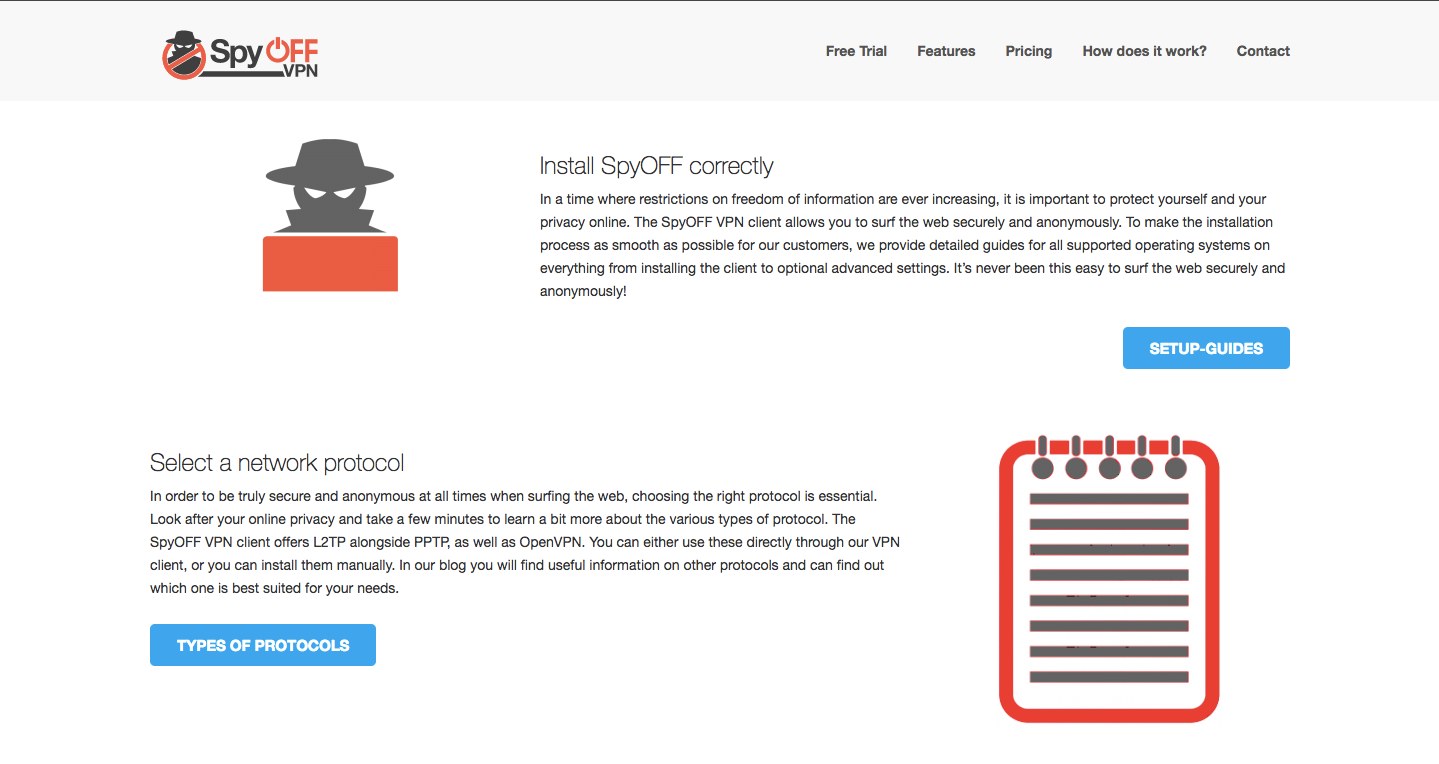 SpyOFF VPN had a slow to moderate performance in our reviews. Our Score: 7/10.

Although speed and performance are largely subject to existing network conditions, we found that the SpyOFF VPN does not particularly perform as well as its peers when it comes to speed.

In our tests, we used the fast.com service provided by Netflix. We first conducted the baseline tests with the VPN turned off.

It was next time for the VPN speed to be evaluated. We turned the VPN on and connected to a Singapore server for a test. 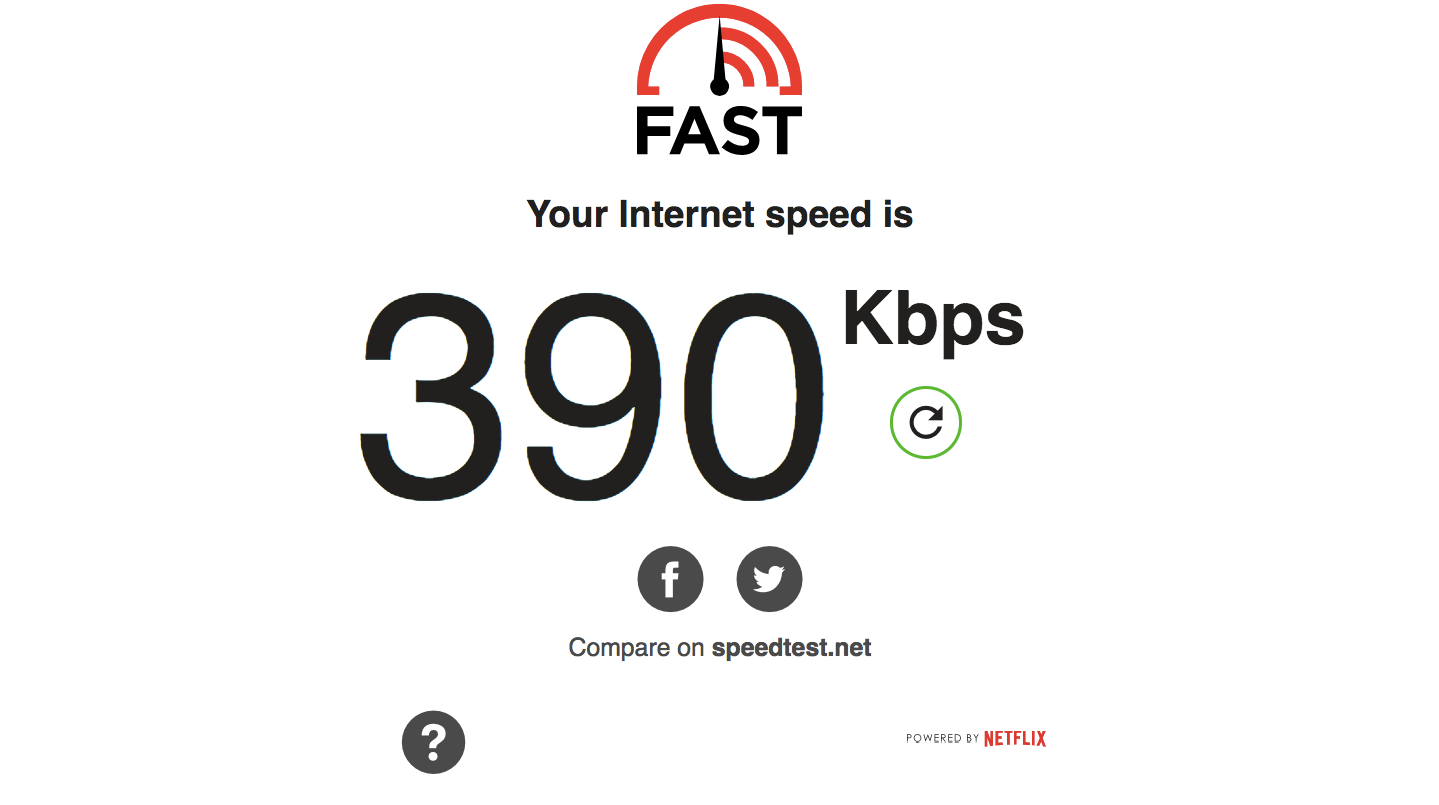 Speed Test with Non-US VPN ServerFinally, we switched to a US server, which is the case, when, for instance, unblocking Netflix content. Here are the results.

The results are clear: at least in our tests, with the prevalent network conditions, SpyOFF VPN resulted in a speed reduction. The speed reduction was lesser when we connected to a US-based server, though, which is a great relief. 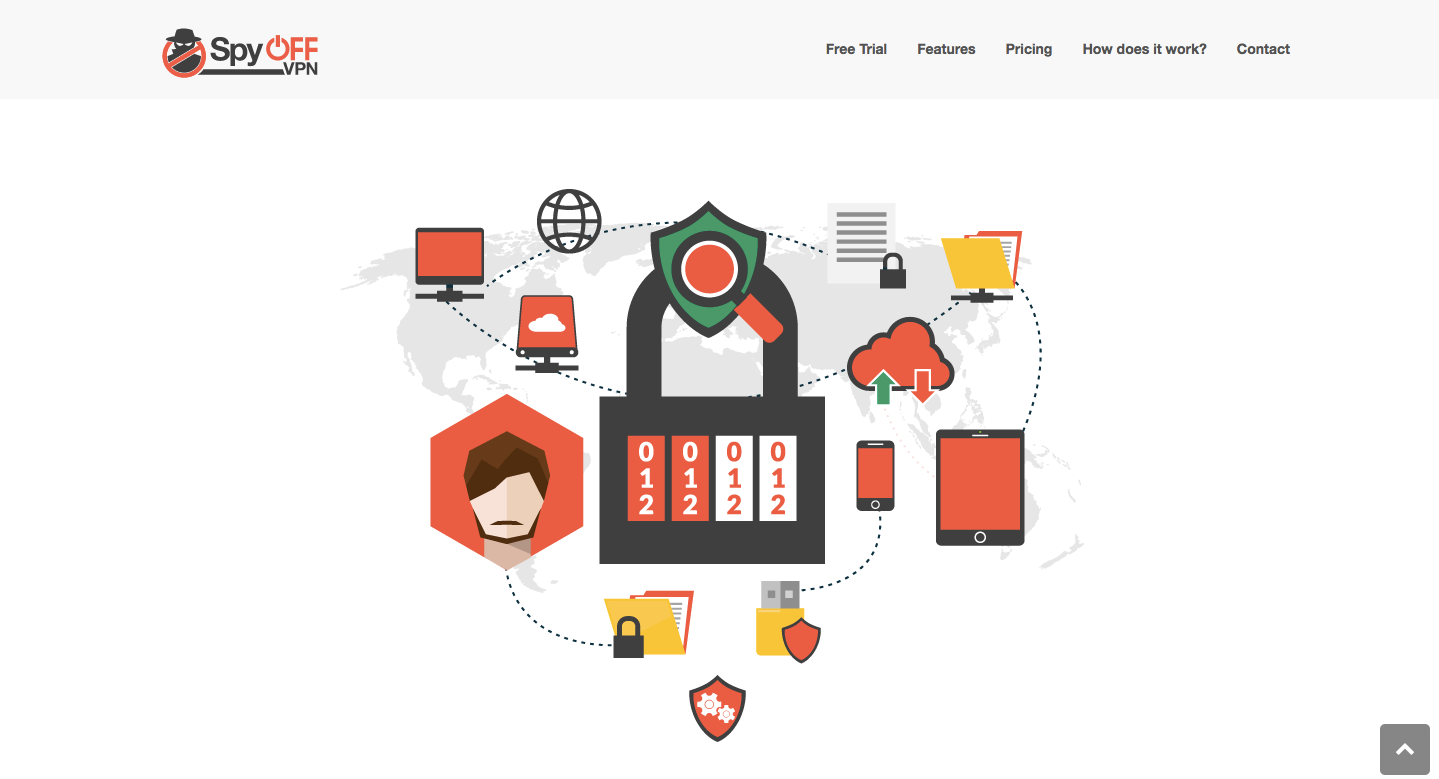 SpyOFF VPN has powerful security and privacy features in place, in particular, the Network Kill Switch, which we talked about in the preceding sections. Let's now look at the encryption and VPN protocols.

SpyOFF VPN offers 256-bit SSL, which means your data is fully encrypted when the VPN is turned on. The service does not just hide the IP address of the system but also encrypts all data for greater protection.

SpyOFF VPN website clearly states that the company has a no logging policy, which means no data is logged by the service. No connection logs or data usage are recorded.

A common problem with many VPN tools is that they often leak the users' IP address. Let's check if this is the case with  SpyOFF VPN. 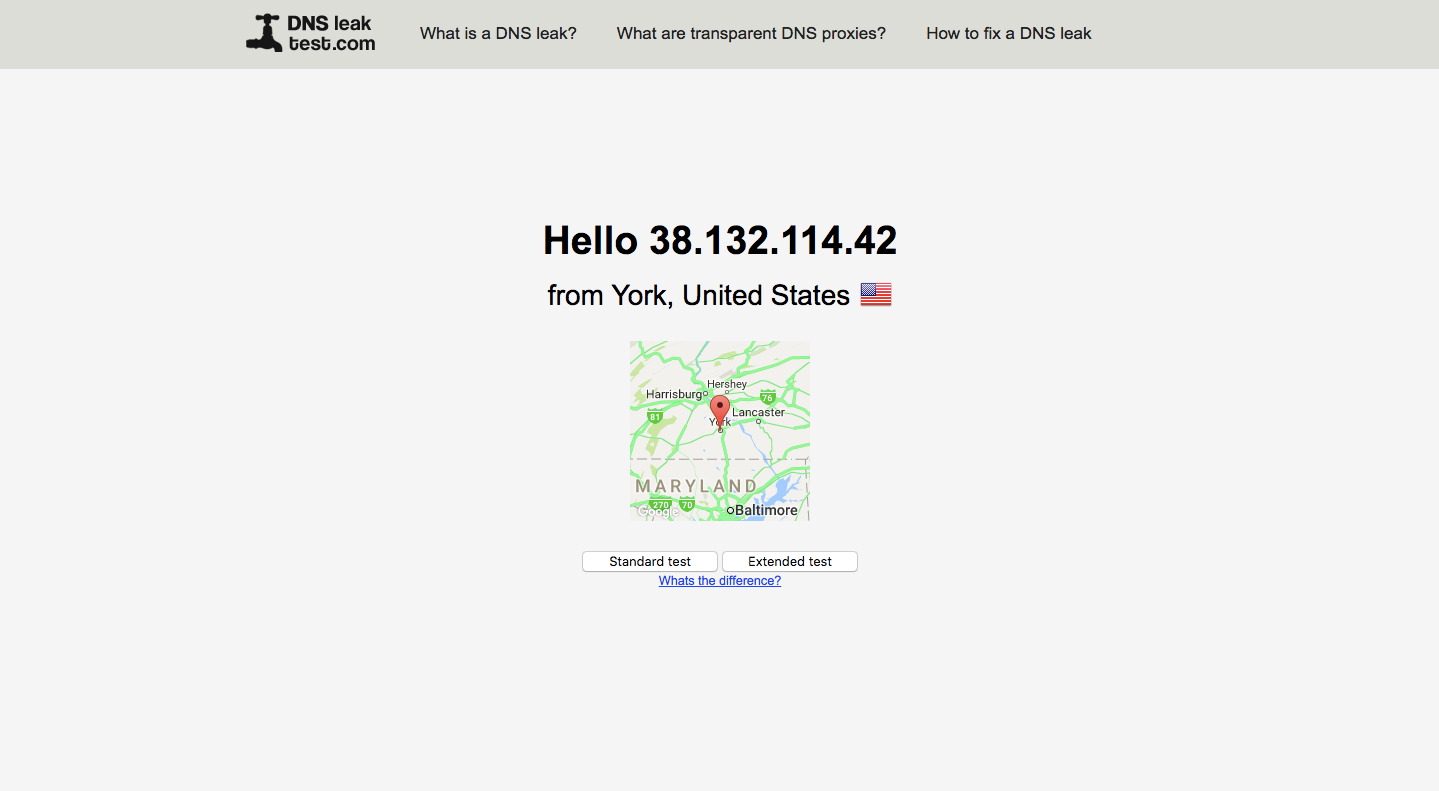 It's clear that the tool does a wonderful job at hiding our real IP address. 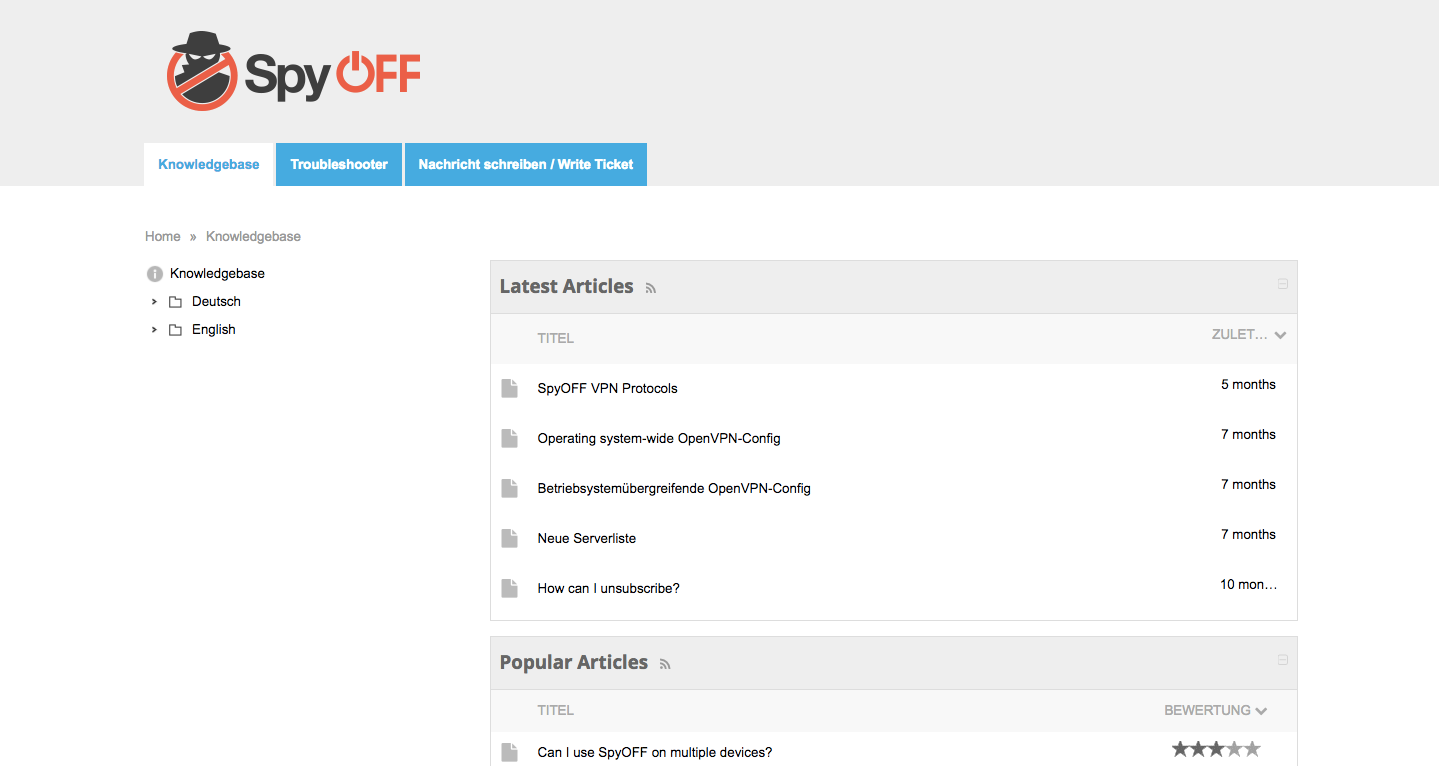 SpyOFF VPN offers a knowledge base, a troubleshooter, and support desk. Our Score: 7/10.

SpyOFF VPN has a number of options when it comes to customer support- users can benefit from the knowledge base online, the troubleshooter, and the dedicated support desk.

We contacted support to test their response times, but couldn't receive a response to confirm. 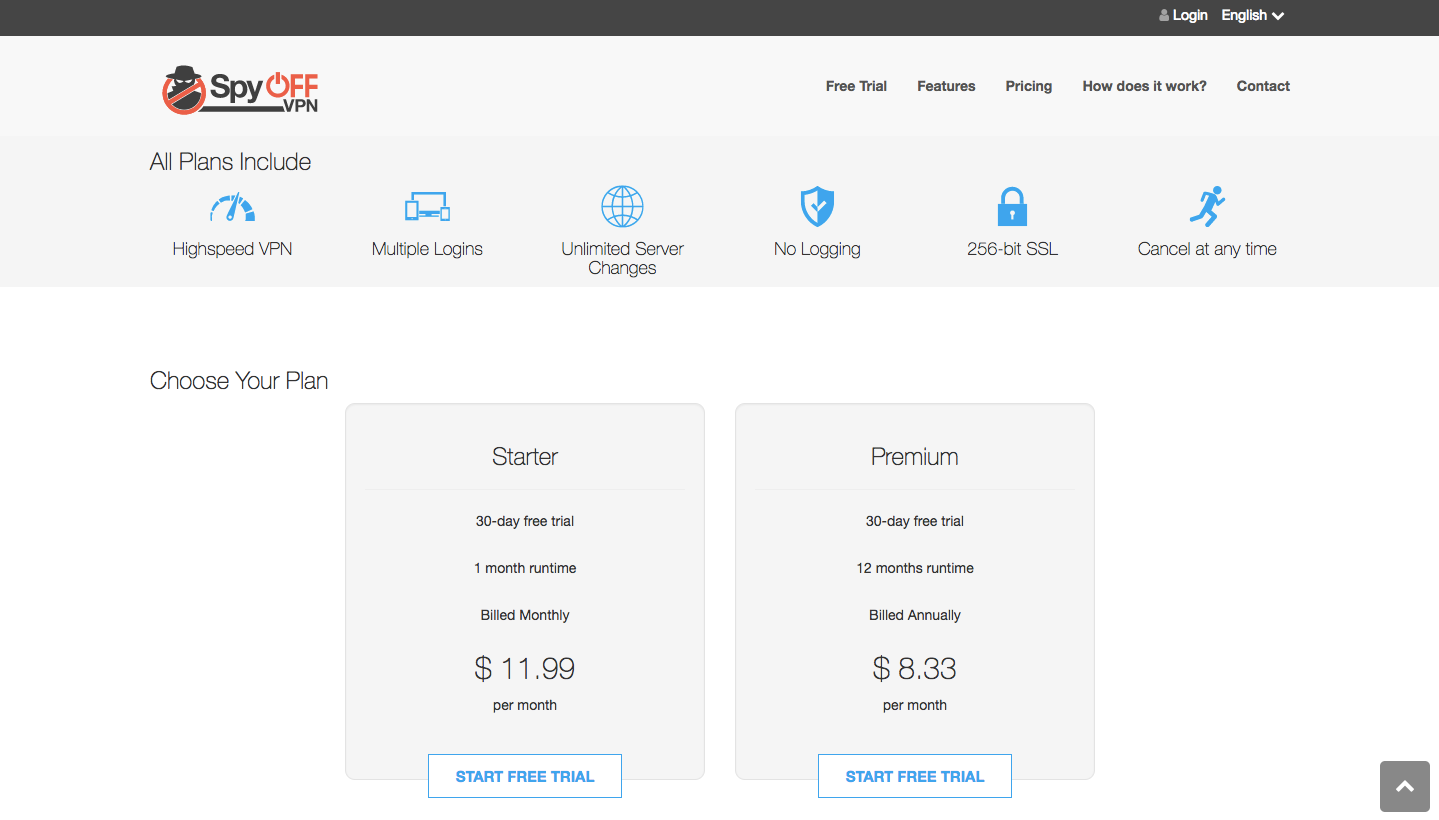 SpyOFF VPN has two pricing plans to choose from. Our Score: 7/10.

Although the 12 months plan is certainly low-priced when compared with the monthly plan, it must be noted that VPN services are highly predictable owing to the nature of the streaming services like Netflix, particularly if the sole purpose of you using the VPN is to unblock content. It is better to choose a monthly plan for you never know how long the service would continue to work for your purpose.

So, how does the SpyOFF VPN fare in comparison to its peers? Well, it's a remarkably easy to use software, which is easily installed.

Who Should Use This VPN? - Those who need an easy to use software for multiple devices and with some advanced features should definitely give this a try.

Who Should Not Use This VPN? - Those who seek deep levels of customization or predominantly advanced features.

Made up your mind to purchase the SpyOFF VPN? Head straight to their official website to download the tool.

SpyOFF VPN is a great option for those wishing to protect their online browsing on multiple devices running different operating systems.

The inclusion of some advanced features such as the Network KillSwitch is great as well but the speed and performance leave much to be desired.

So, how did you find our review? Please consider sharing it in your social media circles to help spread the word. If you have a question, please leave us a comment.