ExpressVPN vs. Ivacy VPN 2021 Comparison – Which of These VPNs Is More Aligned With Your Needs? 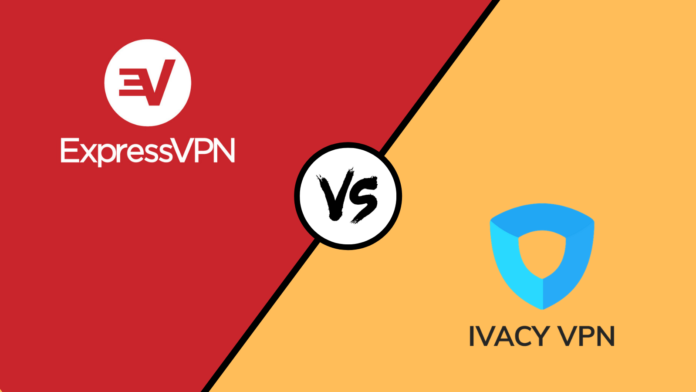 When it comes to ExpressVPN and Ivacy, both of these are reputable and very popular VPN services. Therefore, there must be plenty that these VPNs are doing right. So, how to decide which one to buy? Well, that's precisely where our ExpressVPN vs. Ivacy comparison comes into play!

While searching online for the best VPN, you’ll probably encounter ExpressVPN on every single one of those lists. This isn't surprising because we’re talking here about one of the most capable and user-friendly VPNs right now. As you can see from our ExpressVPN review, even though it's not the most affordable option on the market, it’s well worth its price.

Then, there's Ivacy as well – which is often found on various lists of the best VPNs for specific types of uses. Our Ivacy VPN review will tell you that there are many benefits to using this VPN. However, there are also a few quirks that you need to know about. Don't worry, we'll tell you about these soon enough.

Before we get started, let's first compare the basic facts about these two VPN services. With that said, make sure to pay attention to the following table.

Next, we'll give you another highlight of these two VPNs. The following table lists the scores of individual aspects of ExpressVPN and Ivacy (based on their respective reviews). As such, it provides a glimpse into the strong and weak sides of these VPN services.

That would be all for our introductory segment. If you join us for our full ExpressVPN vs. Ivacy comparison, you'll learn all there's to know about these VPNs. More importantly, you'll easily get to decide which of these is better suited for your needs.

We won't stray away from our usual structure. This article will compare various aspects of ExpressVPN and Ivacy, one by one. This way, we’ll come to a conclusion about which one's better for different types of uses, helping you find the perfect pick.

Knowing where your chosen VPN comes from, as well as under which country's laws it operates, is more important than you think. Trustworthy VPNs take care of this by choosing where their operations are established (often in privacy-friendly countries).

Winner: It's safe to say that both of these are trustworthy VPN services, which means that you can trust them not to collect your personal data. However, we do like the fact that ExpressVPN has actually proven that it collects no data, which gives it a competitive advantage here.

We're sure that you’ll want a VPN that's present on plenty of devices. So, read this segment carefully while thinking about all the devices and platforms you're going to use (in your home, as well as on-the-go).

Winner: There's no clear winner here as both of these VPN services are present on numerous platforms. Also, they can be used on the same number of devices at the same time.

Today's VPNs are usually very easy to install and use. However, it's always a good idea to pay attention to this aspect before buying a subscription, especially if you don't have any experience using VPN applications.

Winner: Once again, it's impossible to choose a winner. Both ExpressVPN and Ivacy come with similar installation methods, suitable even for complete beginners.

So, what kinds of features can you expect? Do you need a rather simple VPN or a more capable one? Let's see what can be expected out of these VPNs.

Winner: If you take just a glance, you'll see practically the same set of features offered by these two VPNs. However, take a closer look, and you'll see that ExpressVPN is a more powerful VPN in pretty much every aspect.

No matter why you want to use a VPN, you'll want one with a sizeable network of servers. That's why we'll take a closer look at what ExpressVPN and Ivacy offer.

Winner: If you need plenty of servers scattered around the world, your choice here is clear. You should pick ExpressVPN.

It's true that VPNs are complex applications powered by high-end technologies. However, this doesn't mean that they're complicated to use – as both ExpressVPN and Ivacy show.

Winner: Even though Ivacy gets the job done, it's not the most polished or elegant solution. And then, we have ExpressVPN, which ticks all the right boxes. The choice here is clear - if you want a highly streamlined VPN in terms of its UI and UX design, go for ExpressVPN.

Do you need a VPN to unblock Netflix and other popular websites? If that's so, you'll need a capable VPN with a proven track record of working with streaming platforms. Don't worry, we have some options for you, as you're about to see.

More on Streaming via VPN

Winner: This is yet another round without a clear winner. Both ExpressVPN and Ivacy can easily unblock a host of websites, including the world's most popular media streaming platforms.

This segment of our ExpressVPN vs Ivacy comparison informs you about encryption, protocols, and other features designed to safeguard your data. Therefore, make sure to read it carefully.

Winner: In terms of ensuring that your privacy is intact, both of these VPNs are highly effective. The only thing that goes in ExpressVPN’s favor is its recent audit – which gives you peace of mind when browsing the Web. Therefore, if you're looking for the best way to ensure the privacy of your data, ExpressVPN should be your pick.

It's true that you can do plenty of speed up a slow VPN. However, you can avoid slow VPNs completely by reading articles just like this one. That's because we put VPNs through speed tests while reviewing them, telling you what kind of performance to expect.

Winner: There's no need to think hard about the winner of this round. Being one of the top-performing VPNs right now, ExpressVPN should be your first pick.

As you know, VPNs are technical solutions. Even though they're usually highly optimized, something can go wrong from time to time. This is the reason why we'll compare these two VPNs' customer support systems.

Winner: Finding a VPN with a team that's always ready to help (24/7) isn't exactly easy. Well, as it turns out – you have two options right in front of you. No matter if you pick ExpressVPN or Ivacy, you can count on their helpful customer support systems.

We've reached the final round of our ExpressVPN vs. Ivacy comparison. Let's talk about the pricing of these VPNs, as well as other payment-related information.

Winner: This really is a tough choice. Ivacy indeed seems like an excellent deal. However, we can also say that ExpressVPN brings plenty of value for its price. The choice is up to you – whether you have a limited budget or if you truly want the best VPN out there.

ExpressVPN vs. Ivacy – Which One Should You Pick?

We do have to admit – choosing one out of these two VPNs is a tough task. They both offer plenty for their price, and they both have their strong and weak sides. However, ExpressVPN seems like a more capable VPN solution in this comparison.

Ivacy helps you unblock websites, secures your private data, and you can count on its helpful customer support team. However, ExpressVPN offers all of those things as well, in addition to many other benefits. This is one of the fastest VPN services right now, with a proven track record of not keeping its users' personal data. Therefore, it's highly secure yet easy to use.

With that said, we do strongly recommend you subscribe to ExpressVPN if you need a trustworthy, capable, and efficient VPN service.

That would be all for our ExpressVPN vs Ivacy comparison. If you have any questions or doubts, keep in mind that we're here to help. Just make sure to post your comment below. And, finally - thanks for reading!