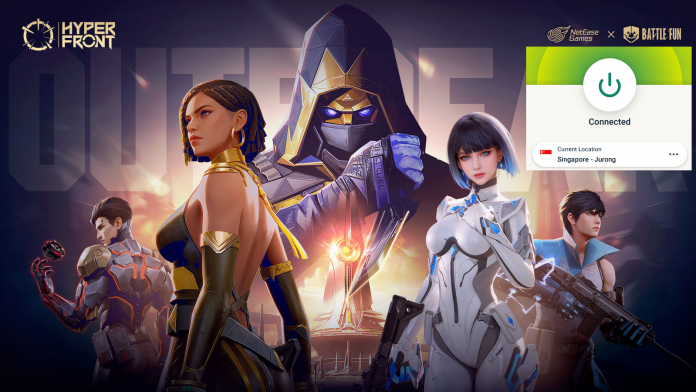 Hyper Front is a mobile 5v5 shooter game by NetEase, described by many in the industry as a "Valorant clone." The game has recently seen a global release (as of July 20th, 2022), after a limited release in Southeast Asia. Well, we say global - but Hyper Front is actually blocked in India due to so-called "security concerns" over the game's Chinese developer. The best way to get around geo-blocks is to use a dedicated Hyper Front VPN to change your online location.

How does that work? Well, VPNs assign your device a different IP address depending on which server you connect to, thus allowing you access to any content available in the region. And yes, that applies to Hyper Front as well as many of the other hundreds of Chinese apps blocked by the Indian government.

VPNs also encrypt your network traffic, making it unreadable to any third-party snoopers. Stay safe against various hacking methods, data logging from your Internet provider, and other online threats. Not only that, but you get built-in DDoS protection when playing Hyper Front and other online games, as hackers can't see your true IP address.

And if you're not familiar with how to use a VPN to unblock Hyper Front in your area, don't worry - we've got you covered. Read on for a quick guide.

How to Unblock & Play Hyper Front with a VPN

It's quite easy to get around geo-blocks and enjoy any game, no matter your location. Here's how to play Hyper Front with a VPN from anywhere in the world:

What features should you look for in the best VPN for Hyper Front? For starters, you'll need fast servers in as many regions as possible, as nobody wants to experience lag during competitive gameplay. Then, you'll need a working kill switch on Android and iOS/iPadOS so your data isn't exposed during potential disconnects. Split tunneling is necessary if you want to exclude other apps on your phone from the VPN tunnel, and gain a moderate speed boost.

Based on these factors and our own in-depth tests, here are the top 3 best VPNs for Hyper Front that are worth the money:

ExpressVPN blazes past the competition with its high-performance VPN servers located in 90+ countries. Their impressive coverage means you'll always find a fast local VPN server to unblock and play Hyper Front lag-free. And thanks to their beginner-friendly apps on both Android and iOS/iPad OS, you won't need to fiddle with any complex settings to get started.

Their Lightway encryption protocol provides tight security while being more efficient than its OpenVPN counterpart - a great option for speedy performance and less data usage while playing Hyper Front on mobile connections.

Since this is the best VPN for Hyper Front, it also includes a capable kill switch to protect your online data during sudden disconnects (if they happen, in the first place), as well as split tunneling to provide a small speed boost if required. So, plenty of advanced stuff overall.

One minor gripe you may have with ExpressVPN is the modest device limit, as you can only link up to 5 devices per account. Fortunately, you can always install ExpressVPN on a router to get rid of the limitations altogether and secure all your household gadgets. That includes devices such as PlayStation, Xbox, and smart TVs, on which you normally can't install a VPN.

Get ExpressVPN for Hyper Front

By default, NordVPN comes with powerful RAM-based servers that offer incredible speeds. When coupled with their Wireguard-based NordLynx protocol, you can expect a high-octane, lag-free experience in Hyper Front. Despite having a multitude of different features "under the hood," the provider's mobile apps still keep things user-friendly with their polished design.

Other than the built-in kill switch and split tunneling, you get to use NordVPN's Threat Protection Lite system. Not only does it block ads, but it keeps you safe from phishing and malware domains (which might try to swipe your sensitive info, including Hyper Front account details).

Unfortunately, the full Threat Protection feature only scans downloaded files for malware on Windows and macOS. Still, we commend NordVPN for adding extra security on mobile, going well past the usual functions of a Hyper Front VPN.

CyberGhost VPN rivals ExpressVPN in the servers department, offering thousands of units in over 90 countries worldwide. They also have gaming-optimized VPN servers perfectly fit for Hyper Front and other FPS games where lag can cost you the match. That said, their speeds are slightly outmatched by NordVPN and ExpressVPN.

However, you can squeeze out some extra performance by choosing their NoSpy servers at a small fee. These specialized servers are self-operated by the provider at their HQ in Romania. In general, they are faster and more private than the rest of their fleet.

As always, their apps have a user-friendly design and come equipped with an always-on kill switch (which means it's always active in the background) and split tunneling. To make testing their apps more convenient, CyberGhost VPN has a generous 45-day money-back guarantee. Plenty of time to see how Hyper Front and other games perform on their top-class service.

It's unfortunate that some governments (e.g. India) feel the need to block games like Hyper Front due to supposed "security concerns" - but what can you do? Well, you can always get one of the best VPN for Hyper Front out there and side-step such silly censorship.

To recap, we believe ExpressVPN is the best Hyper Front VPN (try it risk-free for 30 days). This is all thanks to their max-performance servers located in 90+ countries, easy-to-use apps, plus a working kill switch, split tunneling, and automatic obfuscation if you want to hide your VPN activity for any reason.

Looking to test more options? Then head over to our full list of the best VPN for gaming. We've included more outstanding VPN providers for you to check out. And if you need a VPN for more than just gaming, here's our central guide to the best VPN services overall.

Is It Legal to Use a VPN with Hyper Front?

Yes, it is legal to use a VPN to play Hyper Front. That said, there are a few countries where VPNs are illegal, so be sure to check your local laws beforehand.

In Which Countries Is Hyper Front Available?

Hyper Front launched globally on July 20, 2022. However, the game is banned in countries like India due to security concerns over its ownership by a Chinese company (NetEase).

To download Hyper Front in India, you need to change your location with a dedicated Hyper Front VPN (such as ExpressVPN) and clear your Google Play / App Store cache.

Android users can also download Hyper Front's APK file to install the game manually. Apple users might need to get a new Apple ID to access a non-Indian version of the App Store.

ExpressVPN is the best VPN for Hyper Front, with blazing fast speeds and servers in 94 countries that guarantee top performance during heated PvP sessions. Plus, it comes with a risk-free 30-day trial.

Can I Use a Free VPN with Hyper Front?

You can, but there's no guarantee it will work. Moreover, free VPNs often suffer from poor performance and crowded servers, on top of logging and selling your online data.

However, if you're willing to agree to some harsh comprises, check our guide to the best free VPN for gaming, where you'll find several options to try.

Having trouble playing Hyper Front with a VPN? Comment down below and we'll do our best to help with any issues. Lastly, thank you for reading!