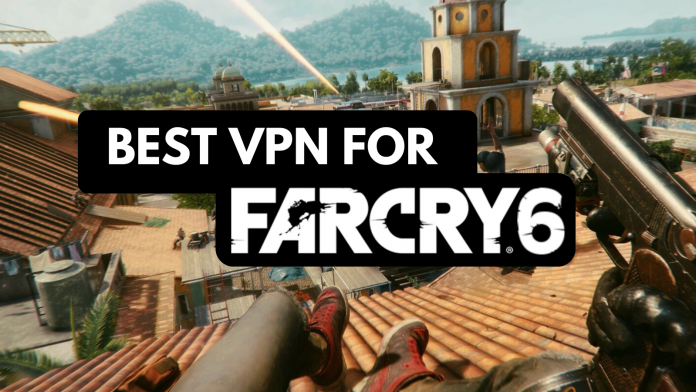 The latest addition to the Far Cry saga brings more FPS action than ever before. You join the rebellion as Dani Rojas and fight the brutal militant regime on Yara - a slice of tropical heaven like no other. You’ll find yourself truly immersed in the life-like visuals and thrilling gameplay of this FPS and open-world masterpiece - that is best enjoyed if you pair it with the best Far Cry 6 VPN, which we're here to help you find.

While Far Cry 6 isn't region-restricted, you might not get a stellar gameplay experience, depending on your location. That's because, apart from the compelling storyline, you can enjoy the co-op mode for some high-octane multiplayer action online. Pairing up Far Cry 6 with a VPN service will not only help you connect to servers closer to your friends’ region but improve the overall experience too.

Also, playing a graphics-intensive game like Far Cry 6 requires high-speed connectivity for updates and patches. So, picking up any run-of-the-mill VPN just won’t cut it. You want to make sure your gaming session doesn’t suffer any lag or disconnections during the gameplay, so let's start talking about the best Far Cry 6 VPN services.

How to Play Far Cry 6 With VPN Without Lag

It's incredibly easy to pair a capable VPN service with Far Cry 6 (as well as your other games). Here are the steps you need to take:

Before we list the best VPN for Fary Cry 6, let's discuss the criteria for recommending them. The number of servers is crucial, mainly because Internet speed is a key component for playing Far Cry 6. Whether you’re gaming or browsing the Web, you would want to keep your activity untraceable with encrypted servers. Finally, you want a VPN that brings multi-platform support for PCs, gaming consoles, and mobile platforms (Android & iOS) as well.

Based on the criteria explained above, these are the 3 best Far Cry 6 VPNs:

A VPN that makes an excellent first impression, ExpressVPN is the go-to choice for more than 3 users, which says something.

It has established 3,000+ servers worldwide in more than 160 locations, ensuring all its users can connect from wherever they are. This comes very handy when you want to hop on to Far Cry 6’s co-op mode and want to enjoy an undisturbed gaming session with your friends.

The VPN provides lightning-fast Internet speed which is well within the requirement for playing Far Cry 6 or any other intense game without hiccups. According to our tests, it's the fastest VPN currently available. That means ExpressVPN can reduce your ping and latency while playing your game, leading to a smoother gameplay session overall.

Also, you have the option of testing each individual server before connecting to it. Simply click the "hamburger button" in the top-left corner of ExpressVPN's UI and go to "Speed Test."

Moreover, you don’t want to compromise your security while playing your game. Thankfully, ExpressVPN hides your IP address exceptionally well, so you can enjoy Far Cry 6 in full privacy. This limits the chances of swatting, a form of digital harassment where a disgruntled gamer can get hold of your IP address and harass you.

Additionally, It supports various devices like Windows, mac OS, routers, and gaming consoles. If you play Far Cry 6 on a PlayStation or Xbox, install ExpressVPN on a router and share your VPN connection that way.

NordVPN can be called a head-turner because it immediately attracts attention with its flashy features and security protocols. That said, you'll receive incredibly fast speeds at a budget-friendly price – all the right things you need from the best VPN for Far Cry 6.

Intensive games like Far Cry 6 require high-speed internet, NordVPN's split-tunnel feature can help with that. This feature gives you the ability to allow the game to use high-speed internet while restricting it from other applications so you can play the game without any lag.

With over 5,500 servers in around 60 countries worldwide, you’ll never be left high and dry when it comes to server selection. If you travel a lot and want to enjoy Far Cry 6 using your home network, NordVPN’s arsenal of servers has got you covered.

NordVPN has another great feature you can use to play Far Cry 6: static IPs. If you like playing in the co-op mode but detest searching for the same VPN server over and over again, a static IP can help you connect to the same server whenever you establish a connection with the VPN.

Furthermore, NordVPN has a "Double VPN" encryption system which is one of the strongest encryptions we have tested on gaming VPN services. This is an excellent way of protecting your gaming session from DDoS (Distributed Denial-of-Service) attacks.

CyberGhost VPN may not be as attractive as other VPNs but it gets the job done, especially because Windows users get specialized gaming servers. So, whether you want to play Far Cry 6 or protect yourself from malicious hackers, this VPN will rise up to the challenge. To such an extent that even its standard servers are perfect for intense gaming sessions.

For starters, it offers 7 simultaneous connections to enjoy your game on various devices. Playing Far Cry 6 with your friends with the same VPN is now easier than ever before. Additionally, you get more than 8,500 servers worldwide, so you will always have a nearby server to connect to.

When it comes to speed, CyberGhost VPN only gives you the best. While testing this service, we did not notice any lags in Far Cry 6. On the contrary, we discovered all game patches and updates downloaded faster than we expected. However, when compared to ExpressVPN and NordVPN, know that CyberGhost is a bit behind.

When it comes to privacy during your Far Cry 6 sessions, don't worry because CyberGhost has the WireGuard protocol, which is the best security protocol right now. You can be sure your game data will remain safe and secure and you will be able to pick up from where you left off.

The VPNs mentioned here are effective in getting the job done, but they certainly aren't built the same. They work well with numerous devices, and we found barely any hiccups during our test rounds. That said, we recommend ExpressVPN as the best Far Cry 6 VPN among these.

We have also covered the best VPN for gaming, along with a detailed look at the best VPN services overall. You will find loads of options there that will surely satisfy your needs.

Yes, it is legal to use a VPN for this game. However, based on which country or region you live in, using a VPN may be restricted or banned. In those cases, we suggest you refrain from using a VPN and acting against any laws.

Will a VPN Affect My Far Cry 6 Gameplay?

A VPN usually slows down your connection because it acts as an extra layer wrapped around it. However, all VPNs mentioned here are premium and top-notch in performance.

Learn more about the fastest VPN services, based on our hands-on testing.

Can I Play Far Cry 6 With a VPN on a Console?

Yes, you can play Far Cry 6 with a VPN on a console. Some premium VPNs (ExpressVPN is our #1 pick) support gaming consoles via routers.

More precisely, you can download a VPN on your router and connect it to your console to enjoy protected gameplay without fearing any hacking or swatting attempts.

We don't recommend using a free VPN, mainly because free VPN don't have as many security features as a paid services. You'll be also prone to data leaks and inconsistent internet connectivity while using free VPNs.

That said, check our guide to the best free VPN for gaming - but be prepared to make some heavy compromises. Also, don't forget that you can try ExpressVPN for 30 days risk-free.

That would be all on the best Far Cry 6 VPN. If you have any questions, let us know via the comments section below. Thanks for reading!