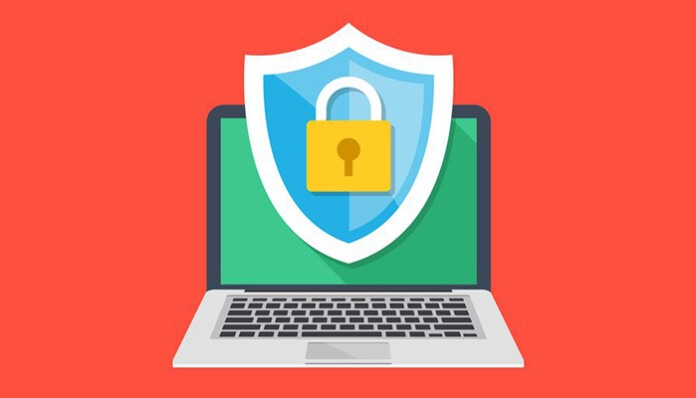 As we hope you know by now, having a reliable antivirus is imperative for any Internet user. There are malicious files lurking around every corner, even on the websites you thought are safe. When it comes to downloading torrents, you need to be especially careful. Even if you take all the precautionary steps, you might realize that a malware has snaked into your computer. Therefore, let’s take a look at the best antivirus for torrenting.

Why Do You Need an Antivirus for Torrenting?

If you think about it for a second, torrent repositories can be a very fertile ground for malware distribution. There are millions of torrents users around the world, using popular torrent websites. Now, let’s say that there’s a new movie you’d like to download. Without hesitation, you add that torrent file to your torrent client and begin to download it. Since torrents are downloaded bit by bit, malware will be usually the first file you download. Not only that but you can become a distributor of malware yourself (by seeding that torrent).

The only way to keep your computer protected is by using a reliable antivirus. Such software should scan every file you download and also come with automated security systems. There’s also another good side to using an antivirus. You won’t only eliminate bad torrents – you’ll also keep your entire Web browsing protected.

The Best Antivirus for Torrenting – Our Recommendations

Finally, it’s time to reveal TechNadu’s picks. Before we do that, we’d like to let you know that we tested each of our recommendations. In fact, you’ll find links to full reviews on our website, so make sure to read them. Hopefully, this will help you to find the best antivirus for torrenting. Let’s jump right in. 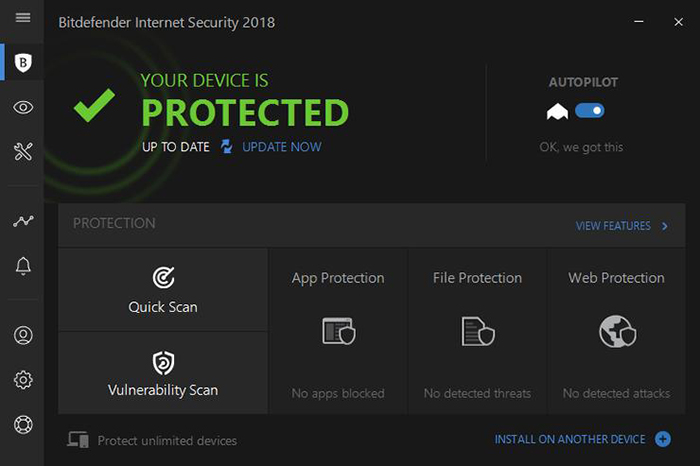 Despite its minimalistic appearance, Bitdefender is one of the most capable antivirus software you can find at the moment. The company behind this product is one of the leaders in this field, and that clearly shows through every tool found in this antivirus.

From the ground up, this software is designed to run on its own. Upon the initial setup, you can instruct the way you want to be protected, and Bitdefender will do the rest on its own. Thanks to automatic scanning of downloaded files, you can be sure that your torrenting is protected the right way. This antivirus won’t only actively scan your downloaded files, but will also stop any suspicious applications that try to launch. Windows users will especially care for this since a lot of viruses are hidden in executable files. Among some more advanced features, you can count on cloud scanning to make sure that all your personal files are malware-free.

Before jumping to the premium version, we recommend trying out the free version of this antivirus. You can learn more in our Bitdefender Free Antivirus review. 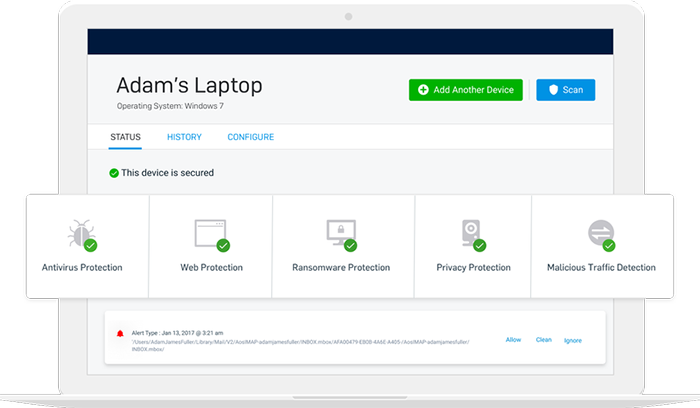 Sophos brings a unique solution that consists of two equally important components. There’s the antivirus component that works as expected. However, there’s also a management component that lets you control multiple devices at the same time.

In terms of downloading torrents, Sophos can keep you protected with intelligent automatic security measures. This antivirus scores high when it comes to identifying even the newest threats. This should keep you at ease when downloading torrents. In addition, Sophos Home Antivirus will block any malicious attempts that come from opening infected applications. No matter which operating system you use, you’ll be able to preview suspicious files and safely remove them.

A unique thing about Sophos is that you can install it on up to 10 devices and keep that network of computers protected. There’s a centralized dashboard that lets you easily review connected computers and perform all kinds of checks. To learn more how this works, read our review of Sophos Home Antivirus. 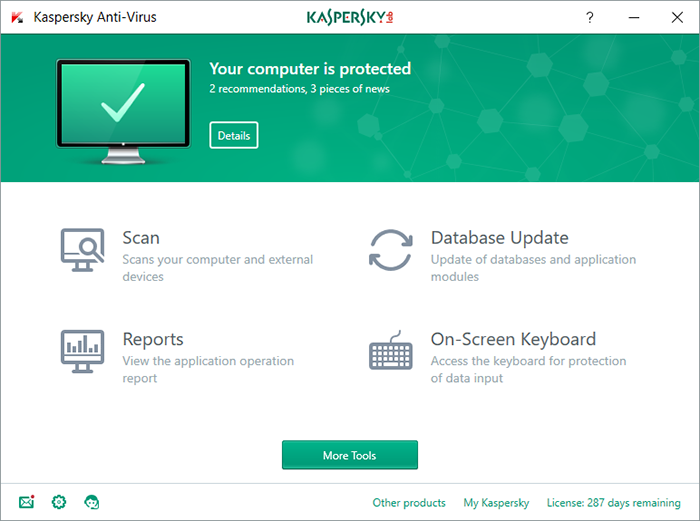 If you’re not sure which antivirus to pick, it’s always a safe bet to choose one of the oldest. With over 20 years of experience in the industry, Kaspersky is a well-known name all around the world. This company has managed to create a bulletproof antivirus that brings all you could ever need, and then some more.

Over the years, there were many users of this antivirus who claimed that Kaspersky is hogging their system. Even though this was true once, this is no longer the case. The latest version of the Kaspersky Antivirus is a highly polished software that runs without a single problem. In fact, you won’t even notice it running in the background.

As you can expect, there’s a rock-solid standard set of features which include manual and automatic protection. Then, you should also know that Kaspersky scans files as you download them, and blocks those malicious downloads. There’s also cloud protection included, as well as a very helpful password manager. Keep on reading our review of the Kaspersky Free Antivirus – to check out what’s offered in the free version. We’re more than sure you’re going to love it. 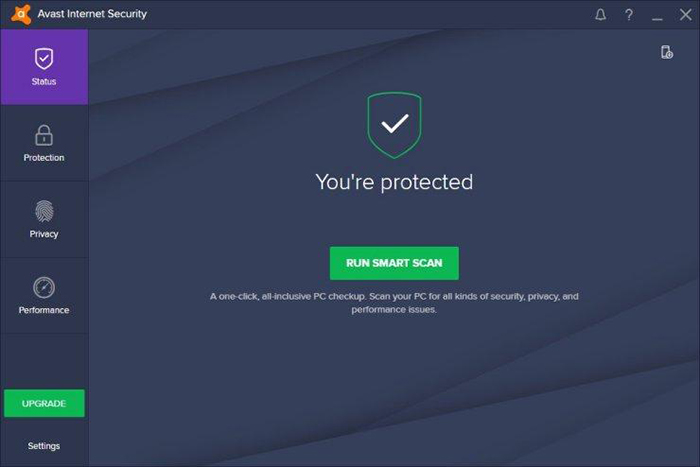 Avast Internet Security is a complete solution for home users. This isn’t only an antivirus but a comprehensive tool for keeping all dangerous files out of your computer. If you don’t only want to block malware, but also optimize your computer and improve your Web browsing, this is the solution to be interested in.

Once you install Avast Internet Security, it will take over your computer and your Web browser – in a good way. The software is very effective when it comes to ransomware since it encrypts your files so they can’t be held hostage. In addition, there’s also a screening of potentially dangerous websites, which is of great use when torrenting. You probably know that torrent repositories serve malicious ads, which can be blocked using this antivirus. Last but not the least, Avast brings a nicely polished UI and runs in the background without you noticing it.

If you’d like to get started with the free version, you can read our review of the Avast Free Antivirus. However, we are sure you’ll going to join the bandwagon and buy the premium-priced Internet Security package. 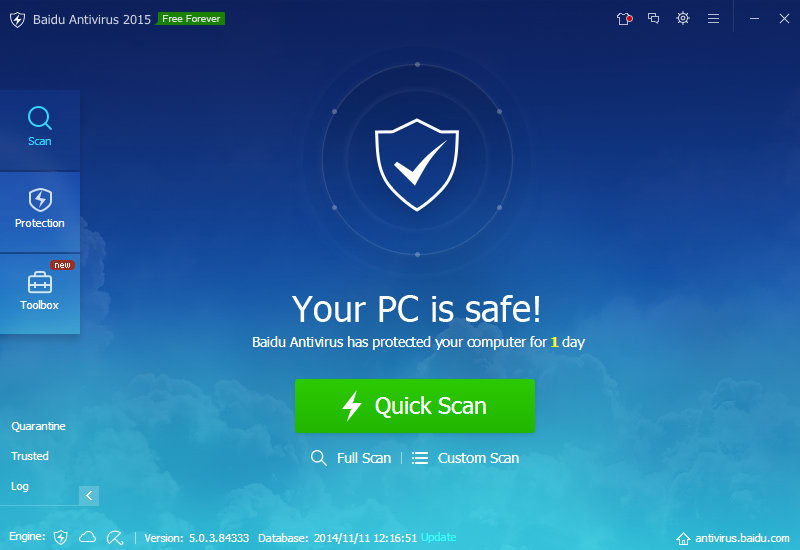 The last on our list but certainly not the least is the Baidu Antivirus 2015. No, that’s not a typo – and we’re not sure why Baidu doesn’t want to update the name to 2018. This isn’t an old antivirus but a frequently updated one that brings amazing performance and efficient malware scanning.

First of all, Baidu Antivirus is designed to be lightweight in size and performance. It doesn’t have the most intuitive UI but does come with numerous interesting features. While this antivirus will scan your torrent downloads and warn you of potentially dangerous files, you can also run manual scans. There are several different engines to choose from, depending on how deep you want to go. Baidu will dive pretty deep and even scan your PC’s performance. Additionally, it can recommend quick system fixes to make sure you can download torrents without affecting the rest of your system.

For more information, you can read our review of Baidu Free Antivirus where you’ll find plenty of in-depth information.

We hope that you managed to pick the best antivirus for torrenting. However, this isn’t where you should stop. Here are a few interesting articles on TechNadu.

This is where we conclude our list of the best antivirus for torrenting. If you have any questions or doubts, don’t hesitate to let us know. Feel free to post a comment below, and we’ll answer as soon as we can.